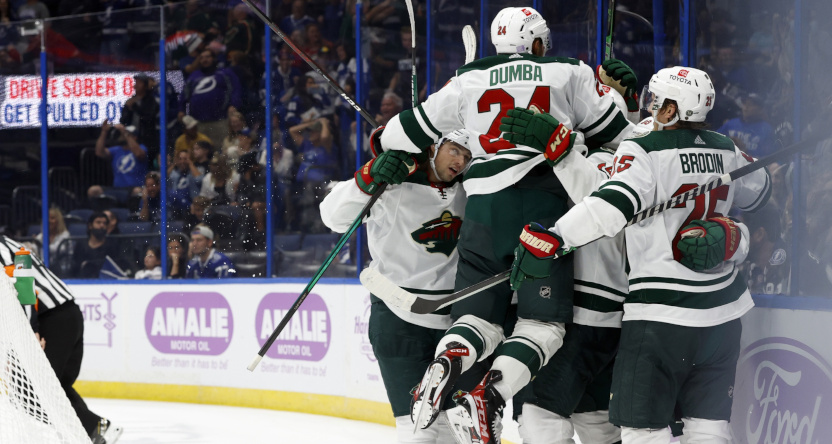 We’ve seen plenty of NHL games postponed or rescheduled thanks to factors like COVID-19 outbreaks, but moving a game time back thanks to traffic is an interesting new twist, especially when that’s traffic that wouldn’t seemingly be necessary for the road team to get to the arena. That’s what happened with the Minnesota Wild-New Jersey Devils game Wednesday, though. Rather than stay in New Jersey, the Wild (seen above celebrating a goal against Tampa Bay Sunday) stayed in Manhattan, and they were late getting to the arena in Newark thanks to pre-Thanksgiving traffic:

Due to the closure of the Holland Tunnel #mnwild players did not arrive for tonight's game until 6:26 pm and the start time has been delayed until 7:33 pm ET.

Our pre game show begins with a shot of the Minnesota Wild bus pulling up to the arena at 6:25p for scheduled 7p start. Traffic . There will be a delay — waiting for a confirmed start time.

#mnwild #njdevils game is delayed. Wild stayed in Manhattan last night and hit traffic on way to arena and were late arriving. Sounds like about a 30-minute delay

Teams playing New Jersey typically prefer to stay in Manhattan instead of Short Hills like they did during the Meadowlands days. But that backfired on the Wild tonight and now their bus is stuck with the Holland Tunnel closed and the game is delayed.

The game is now underway, but it’s definitely interesting that it was bumped back half an hour over this. As Mastracco notes, the Wild certainly aren’t the only team that opts to stay in Manhattan for games against the Devils. But this delay does raise some questions about that strategy, especially on a day that would have been easy to predict as a traffic nightmare. Holiday travel delays are relatable, but this one does feel like it could have been avoided.

There are plenty of hotels in Newark and its surroundings, and the choice to stay in Manhattan is interesting ahead of a predictably traffic-filled day. And that’s especially true with this being the Wild’s only game in the area on this particular road trip; it’s not like they were also playing the Rangers or the Islanders. And at the very least, this raises the question of why they wouldn’t allow more time to get out to Newark. At least they didn’t try to blame this on a transit agency, though.