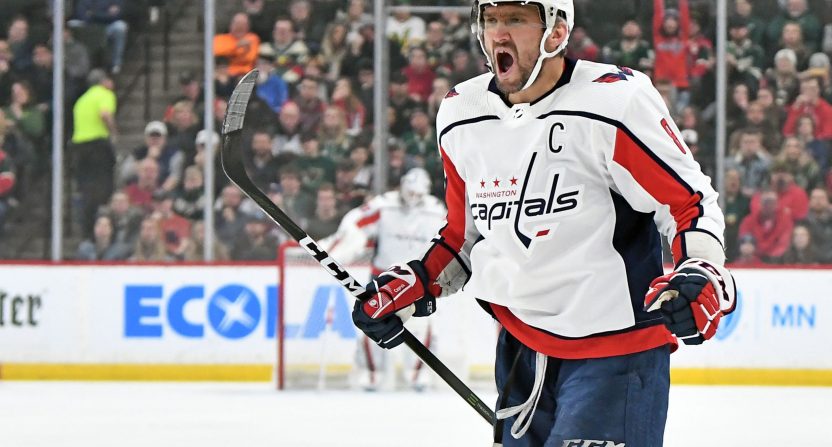 The NHL is still trying to figure out what they will do with the remainder of the 2019-20 season, the playoffs, and the start of the 2020-21 season. While they try to plan for a wide variety of scenarios and outcomes, fans are left looking for things to talk about (read: argue) to kill time until hockey eventually returns. What better time to talk about Alex Ovechkin and his pursuit of greatness?

Ovechkin was closing in on history when the season halted, climbing past the elusive 700-goal plateau and mounting a charge up the list of all-time goal scorers. Currently, Ovie is sitting at eighth among the all-time greats with 706 career goals. The idea that Ovechkin could actually challenge Wayne Gretzky’s historic 894-goal mark was becoming more and more plausible each time he lit the lamp.

At 34, time is a precious commodity if Ovechkin hopes to chase down the Great One’s seemingly unbreakable mark. The idea of scoring 188 more times past the age of 34 is one that sounds completely ridiculous. But, Ovechkin continues to defy reality. He tallied 49 goals in 2017-18, 51 goals in 2018-19, and is sitting at 48 goals this season. Using some quick math, that comes to a total of 148 goals in Ovechkin’s last 231 games (0.64 goals per game average). Assuming he maintains that same average, which we admit is one hell of an assumption, Ovie would need about 295 more games to reach Gretzky.

Again, time is the enemy. Ovechkin needs to score as many goals as quickly as he can before his age starts to slow things down. Lengthy time off, such as games missed due to a serious injury or a canceled season due to a pandemic, could derail his push for the record. So too could that little word hockey fans know to dread – the lockout.

Ovechkin is no stranger to work stoppages in the NHL. His rookie season was delayed by a full year after a labor dispute canceled the 2004-05 season. Another lockout cut the 2012-13 season down to just 48 regular season games. That’s a lot of time – and goals – wasted. Ovie went on to score 52 goals in his eventual 2005-06 debut, and was held to just 32 in the shortened 2012-13. A conservative estimate would say the NHL’s inability to keep the league open has already cost him 60+ goals, and that’s on the low end. Will a new lockout add to that total?

The current NHL collective bargaining agreement is set to expire following the 2021-22 season. Both sides have already voiced some displeasure with the current agreement, suggesting that the negotiations over a new deal might be rocky. One of the largest complaints from the players surrounds the Olympics and the NHL’s decision to not send players to the 2018 games. The NHL, NHL Players Association, and International Olympic Committee have already had discussions about participation in the 2022 Olympic tournament. The World Cup of Hockey will also be a focal point in the negotiations.

As always, money will ultimately be the driving factor. Both the NHL and the NHLPA have made it clear in recent times that they’re more than willing to cancel games if they don’t reach a deal. Recent history has taught hockey fans that a lockout is a very real possibility whenever a bargaining agreement is nearing its end. That’s bad news for Ovechkin and his goal scoring ambitions.

The next potential lockout could impact the 2022-23 season. Ovechkin will turn 37 in September 2022, and, despite his superhero efforts on the ice, would likely be in the twilight of his career. The worst case scenario – a lockout killing off the entire season – could prove to be disastrous in his hunt for the record. A player’s late 30s isn’t the time to sit out for a season and hope to pick up a rapid goal-scoring pace when play resumes. Even a player as dynamic as Ovechkin would struggle to overcome a fully lost season. Surely the NHL and NHLPA won’t make the same mistakes again, right?

To be totally fair, Gretzky did have his own lockout issues in 1994-95. A lockout shortened that season to 48 games, and Gretzky ended the year with just 11 goals. The impact there doesn’t feel quite as significant as Gretzky did the bulk of his scoring in the ’80s, an era that enjoyed lockout-free hockey and staggering offensive numbers. Ovechkin doesn’t have either luxury.

We should learn more about the upcoming CBA negotiations in the near future. Until then, hopefully the NHL and NHLPA have finally recognized the damage that stoppages have on the sport, its fans, and the players who could be held back from all-time records due to financial disagreements.