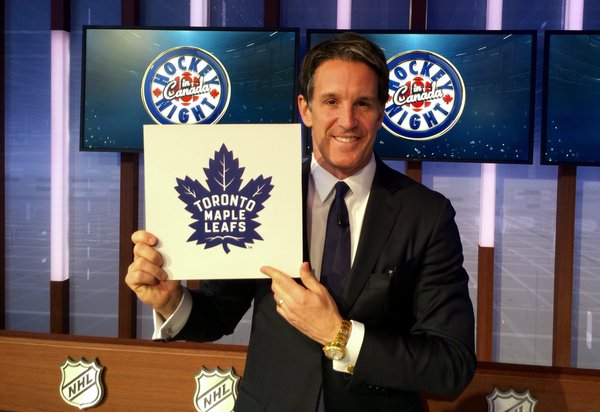 Fans across Toronto lost their collective minds when NHL Deputy Commissioner Bill Daly flipped around a card revealing a Maple Leafs logo, showing the club had won the 2016 draft lottery.

Maple Leafs president Brendan Shanahan stood on the lottery floor in shock with a childlike grin on his face. It was hard to blame him. He was the architect of a bold plan of being bad, but smart. It’s been desperate times in Toronto for a while, and winning the lottery was confirmation that for the first time in forever, the Leafs were heading in the right direction.

Shanahan took on one of the toughest jobs in pro sports in turning the Maple Leafs, long the laughingstock of the NHL, into a competitive, smart team. Toronto hasn’t won the Cup since 1967, as fans have witnessed regime after regime make rash decisions, which have severely impacted the team for the worse. Names like John Ferguson Jr. and Dave Nonis still make fans irate when mentioned.

After taking over as team president, Shanahan knew there wasn’t any easy fix available and decided to take a cautious approach. He didn’t fire everybody. He waited and when the time was right, he attacked. Shanahan brought a group of talented minds into the organization, including former London Knights GM Mark Hunter, former Sault Ste. Marie Greyhounds wunderkind GM Kyle Dubas and the NHL’s Brandon Pridham, while shedding the fat within management.

One year later, the Leafs landed a big kahuna in free agency, snagging head coach Mike Babcock away from the Detroit Red Wings. The Leafs brain trust instantly became the smartest management group in the league.

With a great personnel group now in charge, the Maple Leafs stocked up on assets, doing whatever was necessary to bring them aboard. If it meant having to field a horrendous on-ice product or take on a bad contract, that was OK, because it was all for the greater good. Toronto ended up winning just 29 games and finished with the lowest point total in the NHL this season. Shanahan’s plan was going swimmingly.

After a painful, but necessary season, the Leafs are are stocked full of talented young players to be excited about. Center William Nylander, the eighth overall selection in 2014, has put on a clinic in 2015-16, scoring at an over a point-per-game pace in the AHL with the Toronto Marlies as a teenager. He looked great in a 22-game call-up with the Leafs at the end of the season, showcasing his lightning speed and beautiful, deadly shot.

But as talented as Nylander is, he’s not even the club’s best youngster. That honor, for now, belongs to 18-year-old Mitch Marner.

Marner, who was the fourth pick in last year’s draft, has shown elite talent with the London Knights. The right winger might not be the biggest guy at 5-foot-11, but he more than makes up for it with his skill level. He’s a human highlight reel who’s going to be an NHL star. After a 116-point season with London, Marner has turned it up another level in the playoffs with 37 points in 14 games. It doesn’t hurt that he’s a good ol’ Ontario boy either.

The Leafs are loaded with plenty of other fine prospects, including Kasperi Kapanen, Jeremy Bracco, Dmytro Timashov, Andreas Johnson and Travis Dermott, but adding the first overall pick will give Toronto its best prospect yet in Auston Matthews. Matthews, who’s long been pegged as the next can’t-miss young star, took the unusual route of foregoing junior hockey to play pro overseas in Switzerland under Marc Crawford in Zurich. While some questioned the move, Matthews was dominant.

Despite being 18 in a pro men’s league, Matthews scored 24 goals and 46 points in just 36 games, doing special things night in and night out. Crawford recently compared him to Anze Kopitar and Jamie Benn, two of the NHL’s best, which is a good indication of how high his ceiling is. Matthews will surely be a big part of leading Toronto back to the promised land.

Matthews, Marner and Nylander should each be in Leafs uniforms all season next year, which undoubtedly has Toronto fans drooling.

Of course, the Leafs are more than just prospects, as Morgan Rielly, Nazem Kadri, and Jake Gardiner are all good players to build with going forward. What’s next for the NHL roster, however, might be the club’s boldest move yet. Toronto has long been rumored to be chasing two-time Maurice Rocket Richard Trophy winner Steven Stamkos, who’s set to hit free agency at season’s end. The Tampa Bay Lightning center is an elite goal scorer, an Ontario native, and seemingly a perfect fit. While pursuing Stamkos would seem like a no-brainer for Leafs brass, getting the first overall pick does throw a bit of a wrench in the possibility.

Would the Leafs commit what’s sure to be a massive long-term cap hit to a player who doesn’t necessarily fit into their current youth movement? Especially when that contract could impede the future contracts of young stars? It’s quite the dilemma. Signing Stamkos would be a slight change of philosophy, but it’s going to be tempting.

Then again, questioning the signing of one of the NHL’s best goal-scorers is a great problem to have. The Leafs have the most talented young prospect core in the league, and adding Matthews helps their stock rise rapidly. Shanahan has been Toronto’s biggest star, turning around what was thought to be an unfixable team.

The Leafs aren’t a contender yet, but if they continue on the same path and play things smart, a Stanley Cup could find its way back to Leafs land. I never thought I’d write that. For what was once the unluckiest fanbase in the league, enjoyment can be found once more.