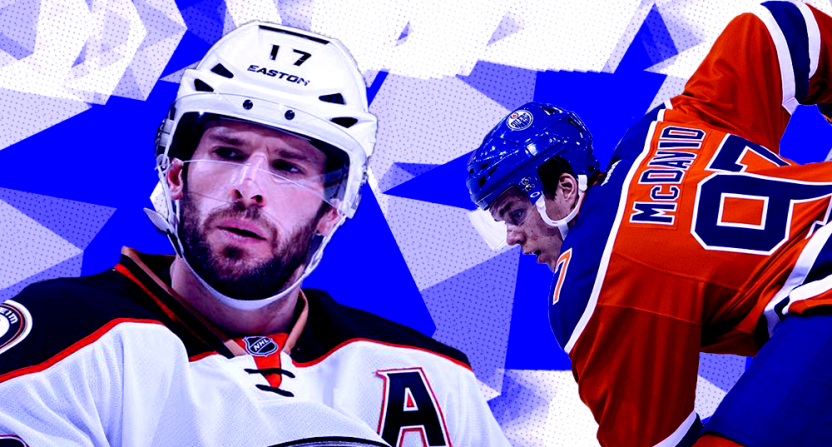 It’s been a fascinating season-long journey to see which NHL organizations have fallen apart. While some have intentionally cratered, tanking for high draft picks, others sit near the bottom of the standings after entering the year with high expectations. As the season comes to a close, it’s become clear which teams are truly the worst in the league. Here are the very worst of the worst.

It’s baffling the Oilers are this freaking bad when they’ve intentionally tried so hard to win.

Edmonton has the NHL’s best player in center Connor McDavid. That alone should be enough for some semblance of success. Instead, the Oilers continued their role as laughing stock of the league, losing even after being gifted multiple lottery picks in the draft. It must feel like a stupidly long season for McDavid, who’s seen coach Todd McLellan GM Peter Chiarelli (finally) let go.

Edmonton’s cupboard is shockingly bare. They’ve got three good forwards in McDavid, winger Leon Draisaitl, and center Ryan Nugent-Hopkins, while the rest of the group is fourth-line caliber players.  Left winger Milan Lucic, Edmonton’s $42 million dollar man, has just five goals. 20-year-old Jesse Puljujarvi, who the Oilers lucked out in getting fourth overall in the 2016 NHL Draft, has been so poorly developed that he’s currently in the AHL. Chiarelli’s final bow as GM was giving Mikko Koskinen, a 30-year-old goalie who best profiles as a solid backup/fringe starter, a $13.5 million contract.

McDavid deserves so much better.

The Kings got off to a putrid start, losing goaltender Jonathan Quick to injury, and never recovered. Los Angeles can’t score, ranking second-last in the league to the Anaheim Ducks with only 143 total goals. Center Anze Kopitar is the only Kings player with at least 40 points. Big offseason free agent signing Ilya Kovalchuk has scored just 13 times, well below the expected amount considering he’s on a three-year, $18.75 million deal. The team is in cap-space hell with big money owed to mediocre, declining veterans like winger Dustin Brown and defenseman Dion Phaneuf.

LA already fired coach John Stevens and started selling. GM Rob Blake got a nice haul for defenseman Jake Muzzin from the Toronto Maple Leafs. Still, the Kings are in rough shape and a needed rebuild is underway.

Detroit can take solace with their dismal record as expectations were pretty low coming into the season. Entering the year, the Red Wings roster was old, expensive, and oft-injured. Then, franchise icon Henrik Zetterberg was forced out of the game due to a degenerative back issue. Without many high-end prospects or talented young players on their roster, a rebuilding year was on the docket and, so far, it’s been exactly that.

The Red Wings offense has predictably been a mess. Outside centers Dylan Larkin and Gustav Nyquist as well as contributions from a handful of younger players, there’s not much in the way of scoring threats.  The team’s bottom six might be the worst in the NHL.

Detroit’s dead-last in the East in scoring and the defense isn’t much better. Dennis Cholowski (hilariously scratched on his own bobblehead night) has a bright future but isn’t quite ready for a top role. Mike Green missed 20+ games due to injuries and Niklas Kronwall is well past his prime. At least Nick Jensen should net Detroit a nice draft pick during the trade deadline.

It’s unfair to pick on the Wings goalie duo of Jimmy Howard and Jonathan Bernier since they’re given no help. But Bernier, in particular, has been awful.

The best thing that can happen for the Wings is to trade as many veterans as possible before the deadline, develop their young players, and just keep losing. Detroit’s first-round pick is likely to fall in the top five, so the closer they finish to the bottom of the standings, the better.

Checking in with the worst record in the NHL, the Ottawa Senators are a dumpster fire thanks to an incompetent owner and a complicit GM.

Ottawa went into full PR mode before this summer, preaching they were going to rebuild the right way and eventually compete for Stanley Cups. After trading defenseman Erik Karlsson, arguably the best player in franchise history, for an underwhelming return, it was instead clear the Senators were panicking. The fact the Senators are terrible is one of the least surprising developments three-quarters of the way through the season.

Offensively they’re okay, thanks to high-end talents like right winger Mark Stone (28 goals), center Matt Duchene (27 goals), and defenseman Thomas Chabot (46 points). Defensively…they’re bad. With an NHL-worst 44.97 shot attempts for percentage at even strength, coach Guy Boucher’s squad is routinely outplayed. Goalie Craig Anderson has done his best, but the Senators still allow 3.71 goals per game. The team’s 219 goals allowed is the most in the East by a wide margin

To make matters worse, Ottawa doesn’t even own their first-round pick, which belongs to Colorado thanks to last season’s Duchene trade. GM Pierre Dorion should be able to turn Stone, Duchene, and other vets into a solid amount of future assets, but counting on him to rebuild the right way is a risky bet. The Senators are broken and immediate help isn’t coming.

The Ducks have nobody to blame but themselves for free-falling in the most extreme way possible.

After winning 19 of their first 35 games, Anaheim fell apart and lost 12 straight games. After winning twice in mid-January, they dropped seven more games by scores like 9-3, 6-1, and 6-2. GM Bob Murray finally came to his senses and fired coach Randy Carlyle, who never should have been brought back in the first place. While it’s unfair to pin their struggles solely on Carlyle, his coaching made a potentially good team play like hot garbage.

To be fair, Anaheim has been ravaged with injuries. Right winger Corey Perry has appeared in just eight games and Ondrej Kase is out for the season with a shoulder injury. However, that’s no excuse to barely average two goals per game as a team. With 133 goals, the Ducks have the league’s worst offense. Center Ryan Kesler, with a ridiculous $6.85 million cap hit for the next three season, has four goals and might have the league’s worst contract. Top scorers Ryan Getzlaf and Perry are also getting older and less productive.

Sadly, there are remnants of a playoff team here. They very well could still qualify for the postseason. John Gibson is a Vezina Award-caliber goalie and the team’s depth isn’t as bad as the four. However, Anaheim deservedly gets the spot as the worst team with their play over the last couple months. When they bottomed out, they became truly unwatchable.