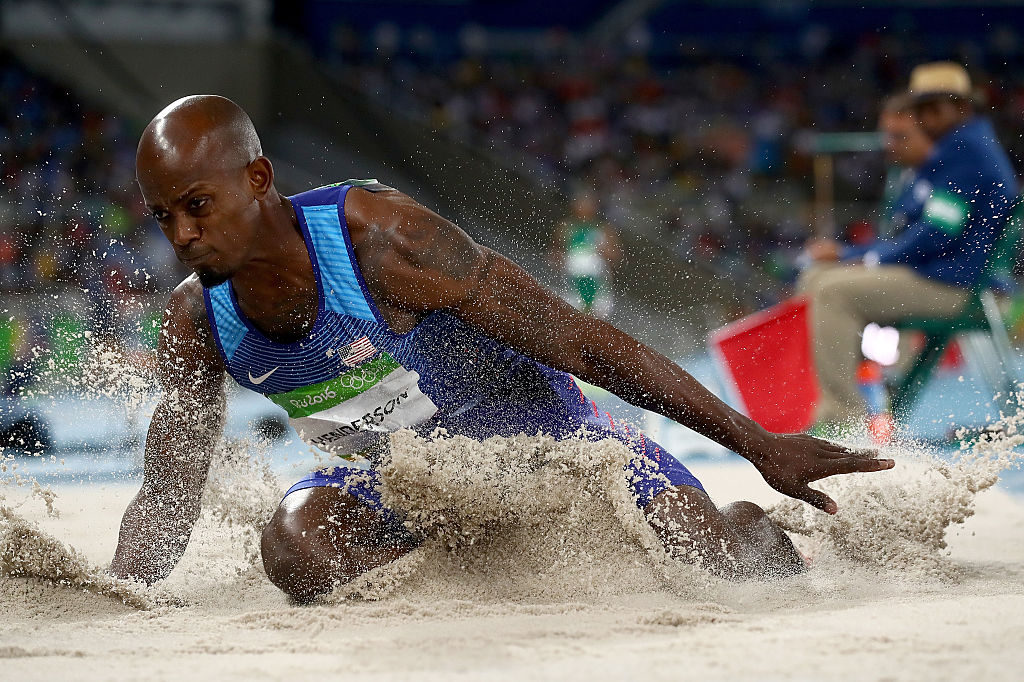 Some sports have records that may never be broken. Baseball has the 56-game hitting streak owned by Lou Gehrig or Cal Ripkin’s consecutive games played streak. The world of track and field has the long jump and the high jump.

While world and Olympic records are being set all over the place down in Rio and in more recent years at the Olympics and other various international competition, the records for the long jump and high jump seemingly have been maxed out.

Super exciting men's long jump. But all of them are still over a cubit shot of the 25 year old world record. #Olympics

On Sunday in Rio, Jeff Henderson of the United States took the gold medal in the long jump with a distance of 8.38 meters, which is just the 344th-longest jump in the history of the sport. The record distance of 8.95 meters was set by another American, Mike Powell, back in 1991.

The Olympic record goes back even further to Bob Beamon’s legendary leap at the 1968 Olympics.  So the gold medal long jump this year still fell more than a half-meter shy of the world record. For some perspective, the world record in the 100-meter dash has been broken 12 times since Powell set the new record for the long jump. The world record for the high jump has stood tall at 2.45 meters since 1993 for the men and at 2.09 meters for the women since 1987.

World-class athletes are getting bigger, stronger and faster on land and in the water, yet for some reason we still cannot seem to jump any farther or higher. World and Olympic records are falling all over the place at this year’s Olympics. World records have been set on the track (men’s 400m, women’s 10,000m), in the pool (8 world records and 15 Olympic records), and at weightlifting – all the marks of the continued evolution of the athlete breaking new barriers.

Is this just gravity holding the ultimate trump card on all of our human athleticism, preventing our rising superstars in the world of track and field from being able to jump any farther or any higher?

Look at the world record long jump and tell me a human being did that???

On one hand, this would seem to make sense, as there has to be a scientific limit to what the human body can and cannot do in this arena. Or is it more the fact that the sport has lost its luster over the years and no longer attracts the kind of athletes that would dedicate themselves to the niche competition?

It is also worth considering the history of the world record in the long jump. It simply does not get broken regularly the way other sports do. Consider Jesse Owens set the world record in 1935 with a distance of 8.13 meters, the first time the world record was more than 7.98 meters (he smashed the record, in other words). It would be 25 years before the record was broken by Ralph Boston in 1960. Boston set the record at 8.24 meters and gradually increased his world-record distance over the next few years until he his 8.35 meters in 1965. Igor Ter-Ovanseyan of China would match the record in 1967 and Bob Beamon would take the lead with his 8.90 meter jump in the 1968 Olympics in Mexico City. That record stood for another few decades until Mike Powell came along in 1991. Now, here we are again, awaiting the next generation to eclipse the mark. Beamon’s 1968 distance remains the Olympic record all these years later.

Imagine if other facets of our lives hung around as long as Beamon’s long-distance Olympic record. Bunny ears on our TV sets? AM radio? Three TV networks to choose from? Sending instant updates and direct messages to our friends and family on paper through the US mail? The shoes have improved. So have the athletes. But some records must have been made to never be broken, or at least not broken for a long time.

It’s been 25 years since a new world record in the long jump and there appears to be no real threat in sight at the moment.