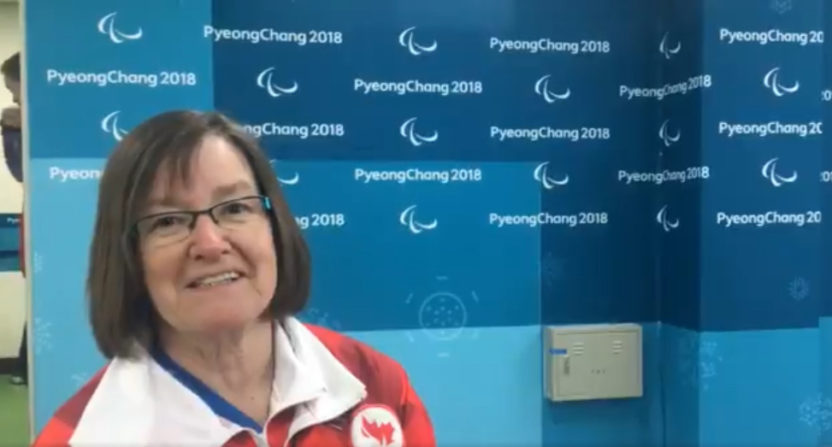 There are plenty of stories of athletes who have overcome significant adversity, but Canadian Paralympic wheelchair curler Marie Wright’s perhaps stands out, both for the challenges she’s faced and for the incredible way she’s responded. Back in 1988, Wright was in a car accident that left her a paraplegic and also left her one-year-old daughter with a serious head injury. She spent 10 months in hospital recovering, and then her husband left her just over a year after she got out of hospital, leaving her to raise four daughters as a single mother while adjusting to life in a wheelchair. But the 57-year-old Wright has accomplished incredible things since then, including being the lead for the Canadian wheelchair curling team at the PyeongChang Paralympic Games, and she told the CBC’s Devin Heroux this week her positive approach has played a key role there.

Marie Wright can’t stop smiling and everyone around her notices — it’s just who she’s always been. Positive, upbeat and excited about what’s to come in life.

On the ice she smiles at her teammates. She smiles at her opponents. But she saves her biggest smiles for her two oldest daughters — Kyla and Tara — sitting in the crowd at the Gangneung Curling Venue.

“To see them here watching me inspires me to play better,” Wright said. “All four of my daughters have meant the world to me. They’re my life.”

…”When my husband left sometimes I felt like giving up, but then I had my four kids. Because of my children I will not give up,” she said, smiling.

…Wright hopes that through this Paralympic experience she can remind Canadians anything is possible — and to always keep smiling.

“Whatever happens to you in life just never give up because there’s something out there for you somewhere.”

Wright’s perseverance is remarkable, as are her daughters’ comments in that piece about how much she did to coach them, raise them and take care of them. And she and the Canadian team (also featuring second Dennis Thiessen, third Ina Forrest and skip Mark Ideson, who relayed his own remarkable story earlier this year of how he took up wheelchair curling after a 2007 helicopter crash left him with quadriplegia) are having quite the tournament, pulling off three massive comebacks so far (including an extra-ends steal against the U.S. Tuesday):

MARIE WRIGHT ARMS IN THE AIR

Canada comes back from being down 3-0 to steal the win from the USA 6-5 in an extra end. They move to 5-2 and all alone in third place. #cbccurl pic.twitter.com/QLeTfLslH1

Wright’s been key there, leading the team in shooting percentage heading into that match against the U.S., and the comebacks against tough odds suggest that they’re following her advice of taking it rock by rock:

“We just never give up” – Marie Wright tells me, smiling, after the win. #cbccurl

Heroux’s piece on Wright has gotten a ton of attention in Canada, and led to plenty of wishes of support for her, including from Saskatchewan premier Scott Moe:

Marie has overcome great challenges and adversity and represents our province so well on the world stage.https://t.co/MxIw2fneZO

And, as Wright’s daughter Kyla Shewchuk noted, her mother is a pretty good example for anyone to follow:

“She’s a Superwoman. It was tough on her. I was the oldest and I saw her cry. We cried together. She’s strong. She’s resilient. And she is a ton of fun. She should be the face of Canada. She is polite and happy and smiling and hilarious. A superhero really, in every way.”