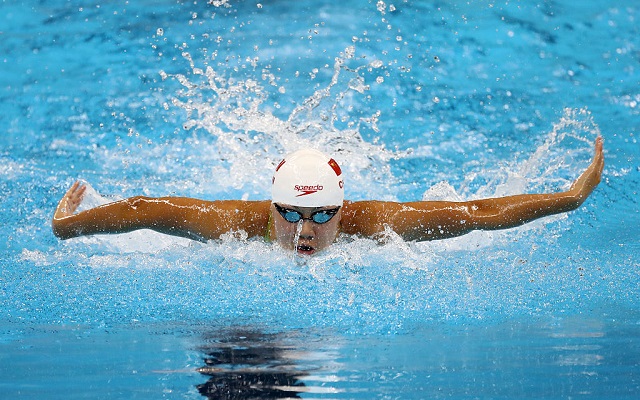 Swimming has dominated the first week of the 2016 Summer Olympics as Michael Phelps and Katie Ledecky have boasted some impressive record-breaking performances. However, a week into the Rio Games, swimming finally has its first major negative story.

Chen Xinyi, 18, is a female Chinese swimmer representing China in Rio. However, Xinyi will no longer be allowed to compete as she is the first swimmer to fail a drug test at the games.

Xinyi missed the bronze in the 100-meter butterfly by nine-hundredths of a second. She was scheduled to swim in the 50 meter freestyle on Friday.

“The CSA has taken this matter seriously and demanded full cooperation from Chen in the investigation,” the Chinese Swimming Association said in a statement quoted by Chinese news agency Xinhua.”

While Xinyi is the first swimmer to test positive at the Olympics, swimming has been at the forefront of doping news since the games began. Seven Russian swimmers were allowed to compete despite initially being banned. As a result, some swimmers complained.

The Associated Press attempted to reach the Chinese Swimming Association for comment about the test, but didn’t receive an answer. Attempts to speak with FINA, the international governing body of swimming, also did not receive a response before the AP published its story.

Li Keke is a spokeswoman for China’s national anti-doping agency and said she had no additional information at the time.

“We have noticed media reports about the case. So far the anti-doping agency has yet to receive any official confirmation,” Li told The Associated Press.

“This reported test should be generated by the organizer. The Olympic committee and FINA should know about it. At present, we will continue to monitor,” Li said.

This isn’t a good look for China with Xinyi being so young at only 18 years old and missing a medal by such a small margin. With track and field set to begin as swimming wraps up, it will be interesting if any other doping scandals break out in swimming.