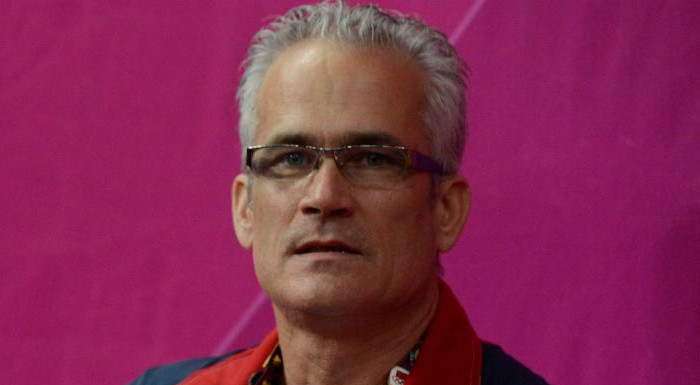 While much of the discussion of the USA Gymnastics scandal has centered on former doctor Larry Nassar, sentenced to 175 years in prison in January 2018 on state charges (in addition to a 60-year federal sentence) for sexual abuse of more than 150 girls and women, that saga has led to much larger questions about USA Gymnastics’ oversight and even charges for some involved. The latest figure to be charged is John Geddert, the U.S. women’s Olympic gymnastics team’s head coach in 2012 (where they won gold; Geddert is seen above during that competition) and the long-time owner of the Twistars training facility where Nassar worked.

Michigan attorney general Dana Nessel announced 24 criminal charges against Geddert Thursday afternoon, including 20 counts of human trafficking and forced labor resulting in injury, one count of racketeering, two counts of criminal sexual conduct and one count of lying to police. Those come from an investigation Nessel announced in February 2019. In a later statement Thursday, Nessel’s office relayed that Geddert, 63, did not turn himself in as arranged and was found dead by suicide. Here’s more on that from Brakkton Booker of NPR:

In a statement Thursday, Michigan Attorney General Dana Nessel said: “My office has been notified that the body of John Geddert was found late this afternoon after taking his own life. This is a tragic end to a tragic story for everyone involved.”

…The charges were filed in Eaton County, which includes part of Lansing. Nessel told reporters Geddert had turned himself in for arraignment.

“These allegations focus around multiple acts of verbal, physical and sexual abuse perpetrated by the defendant against multiple young women. I am grateful for these survivors coming forward to cooperate with our investigation and for bravely sharing their stories,” Nessel said.

The indictment alleges that Geddert’s harsh treatment of his athletes constituted human trafficking and forced labor.

Here are more on the specific charges against Geddert from David K. Li of NBC News:

In the two criminal sexual conduct counts, Geddert, 63, is accused of “sexual penetration” of a girl under 16 in January 2012, according to the complaint.

“John Geddert used force, fraud and coercion against the young athletes that came to him for gymnastics training for financial benefit to him,” Nessel told reporters.

“The victims suffer from disordered eating, including bulimia and anorexia, suicide attempts and self-harm, excessive physical conditioning, repeatedly being forced to perform even when injured, extreme emotional abuse and physical abuse, including sexual assault. Many of these victims still carry these scars from his behavior to this day.”

…The charge of lying to police is tied to Geddert’s alleged knowledge of Nassar’s crimes.

“Mr. Geddert knew that Nassar was sexually abusing these patients and that he failed to take action,” Assistant Attorney General Danielle Hagaman-Clark said.

“And that when he was asked about it by police officers during the 2016 investigation into Nassar, he lied about that.”

But it’s important to keep in mind that most of these counts aren’t about Nassar, but rather about Geddert’s own behavior, as per Anna Liz Nichols and Ed White of The Associated Press:

Among the charges, Geddert was accused of lying to investigators in 2016 when he denied ever hearing complaints about Nassar. But the bulk of the case against him involved his gym in Dimondale and how he treated the young athletes whose families paid to have them train under him.

The charges against Geddert had “very little to do” with Nassar, said Assistant Attorney General Danielle Hagaman-Clark.

It’s certainly notable to see another prominent figure in the USA Gymnastics world wind up facing these kinds of counts, and to see him die by suicide. It’s also notable that some of those counts involve accusations about Geddert’s own behavior, not just about his lack of oversight of Nassar. If anything, that’s a further indication of the larger problems that have shown up inside the USA Gymnastics organization.