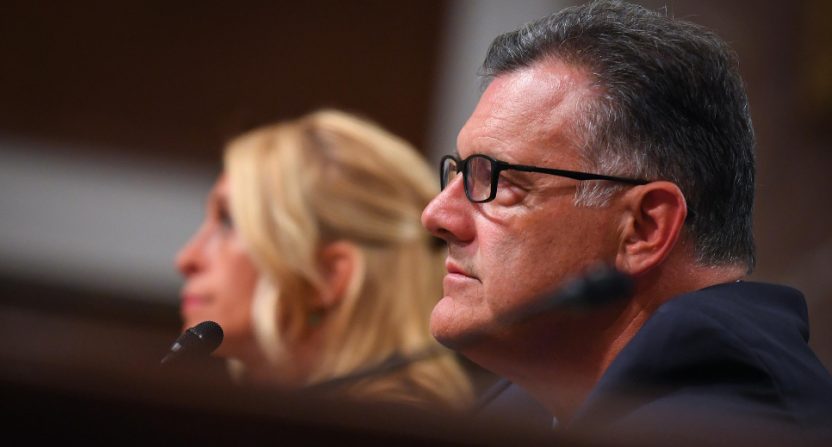 A bad week for USA Gymnastics just got worse. Interim CEO Mary Bono resigned Tuesday after only five days on the job, following criticism of her past role as a principal at law firm Faegre Baker Daniels (the firm accused of helping to cover up the Larry Nassar scandal) and criticism of a September tweet she sent where she blasted Nike for supporting Colin Kaepernick. And now, former USA Gymnastics president and CEO Steve Penny (seen above during a June Senate subcommittee hearing, where he invoked his Fifth Amendment rights six times and refused to testify) has been indicted on felony charges of tampering with evidence in the Nassar case, as per Will Hobson of The Washington Post:

The former president and chief executive of USA Gymnastics was detained by U.S. marshals Wednesday, authorities announced, in connection with criminal charges of tampering with evidence relating to convicted serial pedophile Larry Nassar.

Steve Penny was taken into custody in Gatlinburg, Tenn., and is awaiting extradition to Texas, according to a news release issued by the district attorney of Walker County, home to the Karolyi Ranch, where America’s top female gymnasts trained until earlier this year. A grand jury in Walker County has indicted Penny for tampering with evidence, the district attorney said, a third-degree felony punishable by two to 10 years in prison.

The grand jury alleged that Penny — after he knew a law enforcement investigation of Nassar’s abuses of young gymnasts had begun — ordered the removal of documents relating to Nassar’s treatment of gymnasts from the Karolyi Ranch “for the purpose of impairing the ongoing investigation by destroying or hiding the documents,” the news release stated.

As per a part of that release cut off in the embedded excerpt (it’s visible if you click the full tweet here), “the investigation revealed that the documents were delivered to Penny at the USAG headquarters in Indianapolis, Indiana. To date, those records have not been recovered and the location of the records is unknown.”

Penny was the president and CEO of USA Gymnastics from 2005 through March 2017, and he’s previously come under a lot of criticism for his role in the Nassar scandal. In February 2017, former gymnast Dominique Moceanu said Penny was “at the forefront” of ignoring abuse, and called for his resignation in an interview with The Indianapolis Star:

USA Gymnastics President Steve Penny, who has headed the sport’s national governing body since 2005, she said, should resign “due to dereliction of duty.”

“There’s a history of this alleged negligence on this topic,” she said. “Time and time again, he has been at the forefront of ignoring it.”

…”The image and the reputation was placed above abusive actions. And that’s where the problem lies,” she said. “You cannot put the reputation and the financial dollars ahead of the gymnasts’ well-being and try to cover it up when they come and talk to you.”

When questioned under oath about actions in the William McCabe case (a coach USA Gymnastics received multiple complaints about as early as 1998, but they never reported those to police; as per federal authorities, McCabe began molesting an underage girl in 1999 and would secretly tape gymnasts changing and post their photos on the internet, and he eventually pled federal charges of sexual exploitation of children and making false statements in 2006), Penny and predecessor Robert Colarossi spoke of how they felt the need to protect coaches from false allegations:

In the McCabe case, the organization acknowledged in court records that it seldom, if ever, forwarded allegations of child abuse to police or child protective services without being asked. When questioned under oath about its practices, Penny and his predecessor, Robert Colarossi, shed light on why. The reasons included concern about potential damage to a coach’s reputation if an allegation proved to be false.

…Colarossi, who was USA Gymnastics president from 1998 to 2005, acknowledged in a deposition last year that the organization dismissed the allegations against McCabe as “hearsay” because they did not come from a victim or victim’s parent.

…Penny, the USA Gymnastics president since 2005, testified in a 2014 deposition that the possibility of a witch hunt is “very real” and officials have to move carefully on complaints “because the coach is as much a member as the athlete.”

…Penny said USA Gymnastics would follow child abuse reporting guidelines for any state laws that exist. But he suggested the organization was not obligated to report allegations of sexual misconduct by coaches to authorities.

“To the best of my knowledge, there’s no duty to report if you are — if you are a third-party to some allegation,” Penny said in a deposition taken last year. “You know, that lies with the person who has firsthand knowledge.”

Penny eventually stepped down in March 2017 amidst widespread criticism. But it’s certainly notable to see potential legal consequences for his alleged actions around the Nassar documents here. And that will only add to the discussion of how poorly USA Gymnastics has handled so much of this, and it will add to the pressure for them to do better in the future.