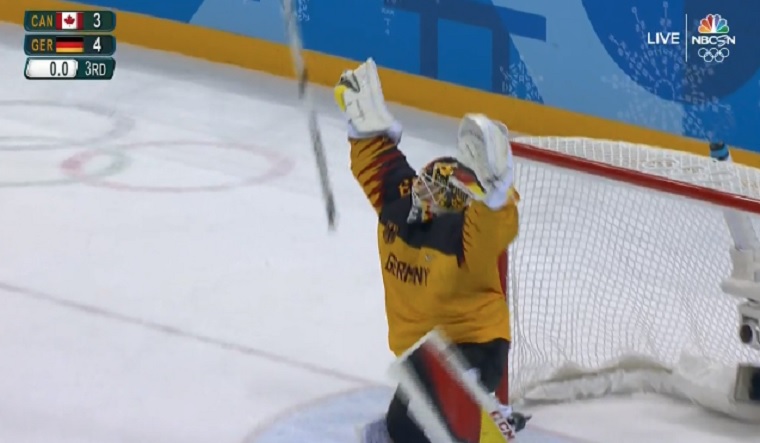 For the first time since 1998, the hockey-crazed nation of Canada will not see a hockey team win a gold medal at the Olympics. Days after the Canadian women’s team lost in a shootout to the United States in the gold medal game, the Team Canada men’s squad was upset by Germany in the semifinals.

The loss sends Canada to the bronze medal game against the Czech Republic while the Germans will play for the first hockey gold medal in their country’s history against the Olympic Athletes from Russia on Sunday.

Canada had won gold in three of the past four Olympics, but the first year without NHL players on the Canadian roster meant Team Canada’s chances to win it all this year were less optimistic. But after playing well in the round-robin portion of the tournament, Canada looked like it had a decent shot at playing for the gold. Once Germany upset top seed Sweden in the quarterfinal, it was mostly assumed Canada would advance to the gold medal game after ending the Cinderella run by Germany. But Germany had other plans.

The Germans roared out to a 3-0 lead on Canada, taking advantage of the power play and never allowing Canada to establish much with their offensive possessions in the first half of the game. Brooks Macek scored a power play goal for Germany midway through the first period and the Germans scored three times in the second period to get to the third period with a 4-1 lead. The cushion came with a power play goal by Patrick Hagfer on a five-minute major penalty following a heavy blindsided hit by Mason Raymond.

Canada scored early in the third period to get a spark, and it was supposed to be the third period where Canada would be able to utilize their depth and skill in a comeback, but Germany’s defense held strong enough to withstand any pressure to secure the biggest win in Germany’s history (topping their recent win against Sweden, and we’ll see if they keep it going against the Russians).

The loss by Canada will not be received well by NHL fans, and perhaps NHL players. This is exactly what NHL commissioner Gary Bettman didn’t need to happen. As suggested earlier this week after the United States was taken out by the Czech Republic, it was on Canada to help protect Bettman from having to address any further criticism over the NHL’s decision to send its players to the Olympics.

While there was some criticism in the United States over the decision and unpleasantries directed at Bettman after Team USA was eliminated, the talk will likely be much more heated north of the border where nothing short of excellence in hockey is expected. No matter what happens against the Czech Republic in the bronze medal game, Canada coming home without gold will only be used to apply more pressure on the NHL to send the best the league has to offer for the 2022 Beijing Games.

Gary Bettman has 2 minutes left before the entirety of Canada starts to call for his dismissal. #CANvsGER

I didn't think it was possible for Gary Bettman to be more disliked by Canadians. This #IceHockey game is proving me wrong. #nhl

Not having NHL players on the roster isn’t the only explanation for Canada’s loss. Germany has been on a miraculous run. Germany finished in 11th place at the 2014 Winter Olympics, and finished 10th four years prior. The highest finish for Germany since 1992 was sixth place, so this run has caught many by surprise. The absence of NHL players has helped to level the playing field for the entire tournament, but Canada still should have had more than enough depth and skill to get by the Germans.

Of course, Sweden could say the same and they lost to Germany in overtime. This was Germany’s first win in regulation time during the Olympics.

Now, Bettman and the NHL face what can only be described as the absolute worst-case scenario at this point: Both Canada and the United States return home without any medals while the Russian team with KHL players wins a gold medal.