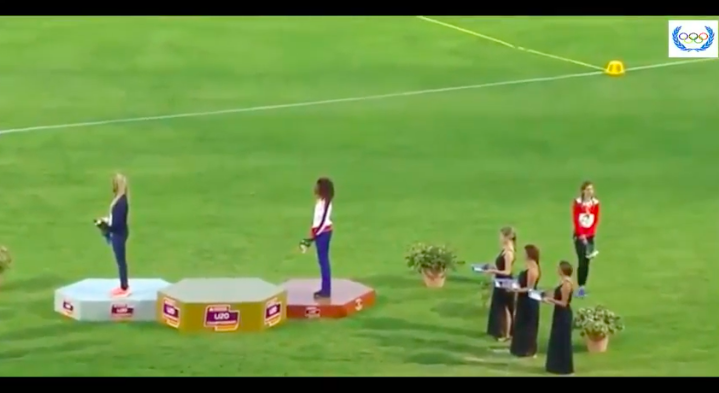 Violetta Skvortsova had the honor of winning the gold medal in the triple jump at the U-20 European Track & Field Championships. What should have been her moment of glory ended up being her moment of extreme awkwardness.

As Skvortsova was standing on the podium, she was expecting to hear the national anthem of her home country of Belarus. Instead, the organizers for the championship played the anthem for Bosnia & Herzegovina. Oops. You don’t have to be an Eastern European political science scholar to know those two are not the exact same thing.

When the wrong anthem began playing, she walked off the medal stand altogether.

Via Channel Nine in Australia, the gold medalist says that even though she could face potential sanctions, she loves her country too much to stand for another country’s anthem.

“I waited until our flag went up, and after I came down from the pedestal,” Skvortsova told the Belarus track and field federation.

“I understand that the procedure violates the awards ceremony and may be followed by sanctions.”

“I am a patriot of his country. I was born in Belarus, which is very beautiful. My love for it cannot be expressed in words.”

This is far from the first anthem-related snafu that we’ve seen at an international sporting event, but it’s hard to understand how a mistake like that could be made? Sure, Belarus and Bosnia & Herzegovina may not be athletic powerhouses, but they should at least be labeled correctly in your “European National Anthems” iTunes playlist.

You’ve got to give it up for Skvortsova and just how much she loves her homeland of Belarus, though. Unfortunately, the only way this ends is with your cousin sharing a poorly made Facebook meme that somehow ties her to Colin Kaepernick.