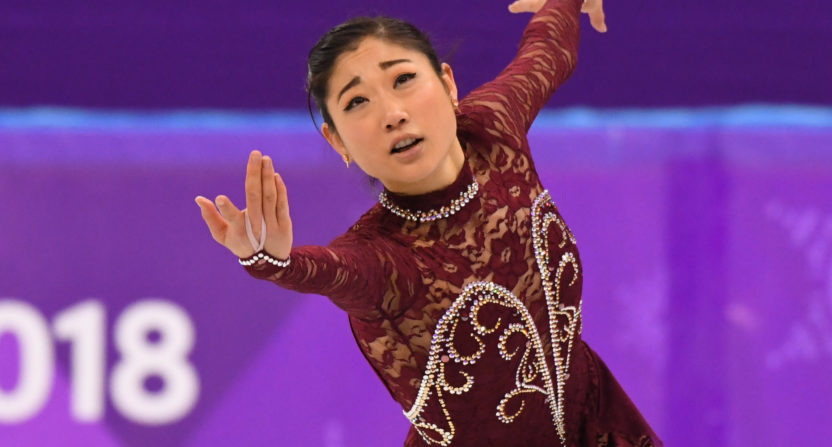 American figure skater Mirai Nagasu did not deliver the performance she hoped for Thursday night, finishing 10th in the women’s long program, but she still leaves Pyeongchang with a bronze medal (in the team event) and a legacy as the first American female to land a triple axel at the Olympics.

Now she hopes that resume will land her on Dancing With the Stars.

Following her skate Thursday, Nagasu told reporters that her individual skate was something like a tryout for the ABC show. Via ESPN:

Maybe Nagasu’s comments suggest misplaced priorities, but we’re very much willing to cut her some slack. Nagasu described Thursday how exhausting the last few weeks have been, as she has woken up at 4 a.m., taken only cold showers and been stretched thin by the various commitments. After working her whole life to reach the Olympics and then draining herself in pursuit of a medal, she wants to kick back and be on TV. Who can blame her?

On Friday morning, Nagasu posted slightly more polished comments to Instagram, saying she enjoyed her Olympic experience and was “overwhelmingly happy” about the support she had received.

Today wasn’t quite the performance I was going for but I have such a newfound respect for the Olympians all around me. It takes a huge level of mental strength to persevere during these three weeks, especially when your event is one of the last ones to go. Eight years ago, I went home in between the Opening Ceremonies and the actual event since the commute was so easy. Although I love Korea, there is nothing like home in the USA. I wanted to nail another triple axel on Olympic ice but unfortunately I didn’t even get a chance to when I hit a rut in the ice. Sometimes you just have to take it all in with a smile on your face. Even with the flaws, I enjoyed my Olympic performances and have been overwhelmingly happy with the support I’ve received from everyone. I’m grateful to the @olympics for bringing my family together to watch me compete and that my grandma decided to surprise me by coming from Japan as well!

As for Dancing With the Stars… the show has featured Olympic athletes many times before, from Nastia Liukin to Apolo Anton Ohno. Now they’ve got a groundbreaking star begging for a spot. Let’s hope Nagasu gets her chance. She deserves it.