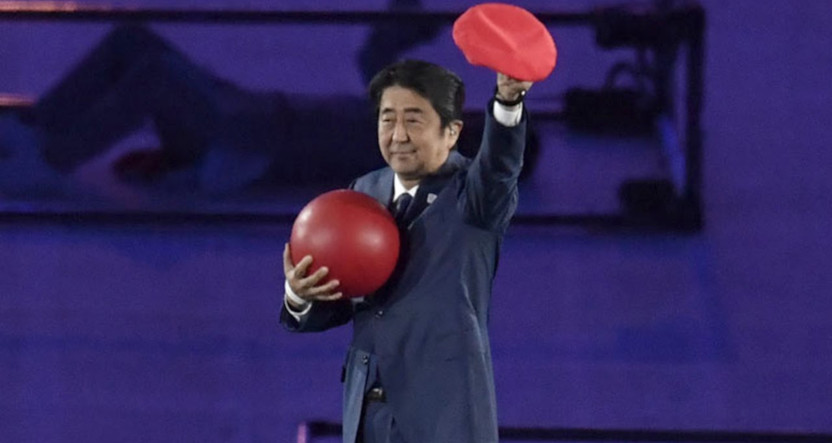 The 2020 Tokyo Olympics are looking more and more likely to be postponed or cancelled as part of the global response to the COVID-19 coronavirus pandemic. Several national sport federations, including USA Swimming and USA Track and Field, have called for the games to be postponed, and the International Olympic Committee indicated Sunday (after long insisting the Games would go on as planned from July 24 to August 9) that they will hold weeks of discussions about a potential postponement. And early on Monday in Japan (Sunday night in the U.S.), Japanese prime minister Shinzo Abe (seen above at the closing ceremonies of the 2016 Rio Olympics) said for the first time that the Japanese government is considering postponement of the 2020 Games. Here are Abe’s comments, via Leika Kihara of Reuters:

The International Olympic Committee (IOC) said on Sunday after an emergency meeting that it is stepping up its “scenario planning” for the Tokyo 2020 Games – including a possible postponement – as the coronavirus pandemic spreads.

Abe said the IOC decision on Sunday was in line with the view that the Tokyo Games should be held in its complete form.

“If that becomes difficult, we may have no option but to consider postponing the Games” given the Olympics’ principle of putting the health of athletes first, he told parliament.

While that isn’t necessarily indicative of solid action, it’s certainly notable to hear both Japanese leaders and IOC officials discussing postponement given their previously-stated commitments to keeping the Games on their original timetable. And there may well be a need to postpone the event; it’s far from known what the world will look like in July, but even if the pandemic concerns somehow clear up before then, it would be difficult to host the Olympics as planned given that many qualification events have already been canceled. That’s fed into calls from those national sports bodies to postpone the Games.

Of course, any postponement of the Olympics isn’t easy. Setting different dates would not only create challenges for the host committee and for athletes, it would also mean some significant changes for broadcasters. And the TV money is such an important part of the Games at this point (NBC alone is paying $7.75 billion for Olympic rights from 2022-36),  so the broadcasters will certainly be part of any conversation about postponement and new dates. We’ll see where this goes to, and an official decision may yet not come for some time (with the IOC’s stated timeframe being “within the next four weeks“), but it’s definitely interesting to hear top officials talk about announcing a postponement.