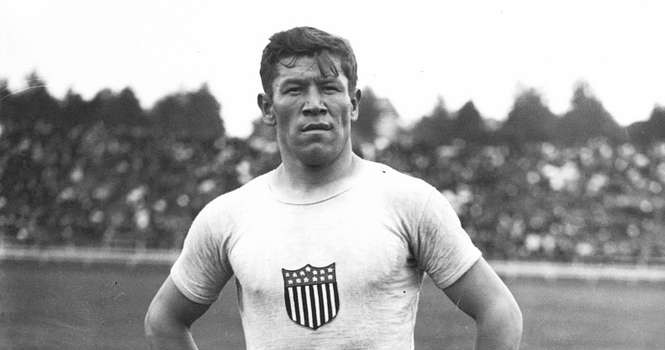 This week saw a change to the results of two sporting events that happened 110 years ago. That would be the pentathlon and decathlon at the 1912 Olympics in Stockholm, both of which were won by famed American athlete Jim Thorpe.

The International Olympic Committee stripped Thorpe of those medals in 1913 after learning he’d taken expense money for playing baseball, which was against the amateurism rules of that time. After a lot of protest, though, 1982 saw the IOC revise that decision, ruling that no protest had been filed within the 30 days required. They awarded replica medals to Thorpe’s family in 1983. But he was only considered a joint winner, which many still found insufficient.

That led to this week, where the IOC changed their records to show Thorpe as the sole winner of those events. They officially announced that move Friday, but Jourdan Bennett-Begaye and Kolby KickingWoman of Indian Country Today found it on the Olympics website Thursday. Here’s the IOC statement on it from Friday, which marked the 110th anniversary of Thorpe’s decathlon win:

The International Olympic Committee (IOC) will henceforth display the name of Jim Thorpe as the sole gold medallist in pentathlon and decathlon at the Olympic Games Stockholm 1912. This change comes on the very day of the 110th anniversary of Thorpe’s medal in decathlon.

This development has been made possible by the engagement of the Bright Path Strong organisation, supported by IOC Member Anita DeFrantz. They contacted the Swedish Olympic Committee (SOC) and the surviving family members of Hugo K. Wieslander, who was named as the gold medallist in decathlon when Thorpe was stripped of his medals in 1913. They confirmed that Wieslander himself had never accepted the Olympic gold medal allocated to him, and had always been of the opinion that Jim Thorpe was the sole legitimate Olympic gold medallist. When contacted by the IOC, the SOC also declared that Thorpe should be acknowledged as the sole Olympic champion in decathlon at the Olympic Games Stockholm 1912.

The same declaration was received from the Norwegian Olympic and Paralympic Committee and Confederation of Sports, whose athlete, Ferdinand Bie, was named as the gold medallist when Thorpe was stripped of the pentathlon title.

IOC President Thomas Bach said: “We welcome the fact that, thanks to the great engagement of Bright Path Strong, a solution could be found. This is a most exceptional and unique situation, which has been addressed by an extraordinary gesture of fair play from the National Olympic Committees concerned.”

The mention of Bright Path Strong is a note to Nedra Darling, executive producer of the forthcoming documentary Bright Path: The  Jim Thorpe Story, and her group that has been lobbying for this change. The name is a nod to Thope’s name in the Fox language, Wa-Tho-Huk, which translates as “Bright Path.” Darling spoke to ICT’s Bennett-Begaye and KickingWoman on that change, and said she was particularly thrilled to get to share the news with Billy Mills, a 1964 Olympic gold medalist in the 10,000 meters who has been working with Darling and others to push for recognition for Thorpe:

“It was emotional. It was the most beautiful gift I could get to be able to tell him, and I didn’t realize it ‘til he just couldn’t speak and I couldn’t speak,” Darling said, who is Prairie Band Potawatomi. “He’s been so supportive of what I’ve been doing.”

All Mills could do was let the tears flow, “tears of joy,” he said; adding he fought for composure and gathered his thoughts during his call with Darling.

Bennett-Begaye and KickingWoman also got a notable quote from Justin Lenhart, the curator of the Jim Thorpe Museum at the Oklahoma Sports Hall of Fame:

“He achieved something that nobody else had ever achieved and has never achieved since and that’s winning gold in the decathlon and pentathlon,” Lenhart said. “It was a travesty of sport that his medals were stripped from him the way they were and they have righted an egregious wrong by restoring his records to the Olympic ledger.”

Indeed, winning the decathlon and the pentathlon in the same year is amazing, and it’s particularly remarkable when you look at just how dominant Thorpe was in those events. This was the classic pentathlon, in the Olympics from 1906-1924, and featuring long jump, javelin throw, 200-meter dash, discus throw, and 1500-meter run: Thorpe won four of those five events and placed third in the javelin, an event he hadn’t competed in before. He also finished fourth in the individual high jump and seventh in the individual long jump. And then he won the decathlon, which was contested at the Olympics for the first time, and featured the 100-meter dash, 400-meter run, 1500-meter run, long jump, high jump, pole vault, javelin throw, discus throw, shot put, and 110-meter hurdles. Thorpe won four of those events outright, beating second-place Wieslander by 688 points, and set a record of 8,413 points that stood for almost two decades. That led to the remark several sources from the time cited of Sweden’s King Gustav V saying “You, sir, are the greatest athlete in the world,” a title many media have since used for decathlon winners.

The 1912 Olympics was only part of Thorpe’s remarkable overall story. He went on to play professional baseball and football, and was an early star with the Canton Bulldogs, and a big part of getting them into the American Professional Football Association, which would eventually become the NFL. Thorpe was even named the first president of the AFPA in 1920, although he spent most of the year playing, so there’s an argument he was the first NFL commissioner.  He also starred on a travelling basketball team, and went on to work in films; he frequently battled racism, though, struggled with drinking, and died at 65 of heart failure. But his athletic accomplishments were incredible, and this move from the IOC to officially restore recognition of his 1912 victories should help them be remembered.

[Indian Country Today; photo of Thorpe at the 1912 Olympics from jenikirbyhistory.getarchive.net]