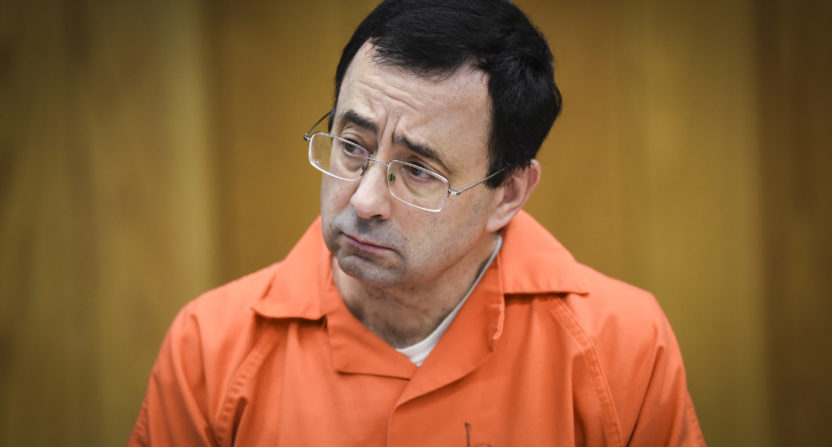 On Monday, former Michigan State and USA Gymnastics doctor Larry Nassar was sentenced to a minimum of 40 years and a maximum of 125 years in Michigan state prison after pleading guilty to three counts of criminal sexual conduct in Eaton County.

That sentencing comes less than a week after Nassar was sentenced to a minimum of 40 and a maximum of 175 years for crimes committed in Ingham County and two months after he was sentenced to 60 years in federal prison on child pornography charges.  All in all, Nassar has now been sentenced to between 140-360 total years behind bars, although the Ingham County and Eaton County sentences will run concurrently, at the end of his 60-year federal sentence. According to ESPN, he would be first eligible for parole in 2117, when he would be 154 years old.

Even though Nassar will almost certainly die in prison before the end of even his first sentence, his lengthy sentences in state court likely provide some validation for the more than 150 women who say he abused them. On Friday, Rachael Denhollander, the first woman to come forward publicly with an allegation against Nassar, asked Judge Janice Cunningham to impose the strictest possible sentence. Via ESPN:

She was the final woman to provide an impact statement on Friday. Denhollander asked the judge: “How much is a little girl worth?” She told Judge Cunningham that Monday would be her opportunity to answer that question by using the full weight of the law against Nassar.

The Eaton County sentencing wraps up active criminal proceedings against Nassar, who will now spend the rest of his days in prison.