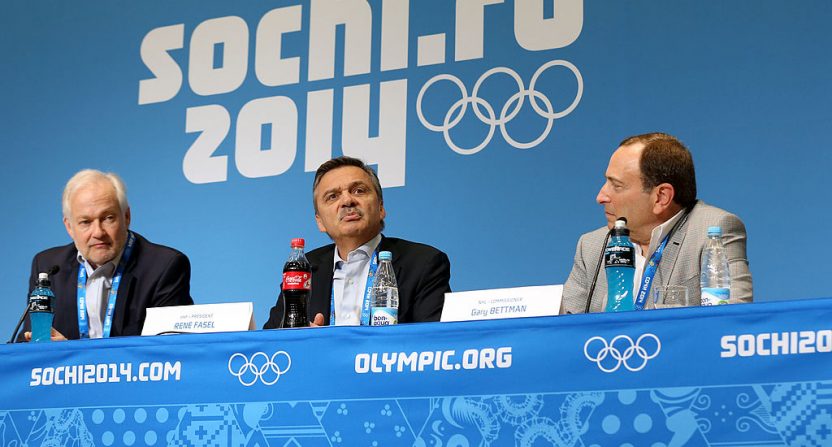 The NHL may not feel the need to send its players to the Olympics, but this is an issue the players are not taking lightly. In light of being blocked by the league from participating in the 2018 Olympics, NHLPA executive director Donald Fehr has suggested this decision may come back to haunt the league in the next labor negotiations.

In a radio interview on Thursday, Fehr said the NHLPA could very well put an emphasis on Olympic participation the next time the labor negotiations come up. And the expiration date for the current labor agreement will be approaching quickly, in September 2019.

“If the notion is that players will just say, ‘oh well, the CBA didn’t provide for it’ or ‘we wish it were different’ – and we could just go on with life as usual or as if this hadn’t happened, I think that’s a very, very, very unlikely possibility,” Fehr said while being interviewed by Sportsnet The Fan 590.

Alex Ovechkin of the Washington Capitals has already drawn the line in the sand over the 2018 Olympics by saying he still intends to compete in the games for Russia regardless of the NHL’s decision. Russia is taking advantage of the NHL’s decision by hoping this persuades some free agents to sign in the KHL.

“Guys love representing their country on [the Olympic] stage and it is a bitter pill to swallow for sure,” James van Riemsdyk of the Toronto Maple Leafs said this week. “As players, we have shown we want to be there and made that very clear, but this decision was made outside of us.”

The problem here is the NHL is operating from a business standpoint and the players are coming from a personal experience standpoint. The NHL has shown to gain little if anything from shutting the league down to make room for the Olympics in recent Olympic years. It may just be a once-every-four-year commitment, which you would think a league like the NHL could stand to work around, but it is doing two things that are counter-productive for the league.

First, it suggests the NHL is not the top-level hockey available to viewers. The excitement of the Olympic hockey tournament is great for the sport, but when you come off a thrilling Olympic hockey tournament and return to the middle of a regular season, the enthusiasm does not carry over the way the NHL had hoped when it first decided to allow participation in the Olympics.

The other problem is the Olympics tacks on additional practices and games for many of the top players in the league, which can come back to have an impact on the quality of play in the postseason due to a longer season. It’s not as though the NHL is going to trim down the number of games in the regular season, so any additional games being played in the Olympics over the span of 16 days can take an additional toll with little for the NHL to market.

And marketing is another key issue for the NHL. The NHL is not able to market the Olympic hockey in a way that it would like that would benefit the league. If the NHL had more of an opportunity to cash in on the Olympic hockey, perhaps the league would have a different stance.

Until then, the league will stand by its decision, and that could, in turn, become a boiling point in future labor negotiations by the players who have come to expect the opportunity to wear their nation’s colors. You better believe this issue is not going to go away quietly.

[The Globe and Mail]