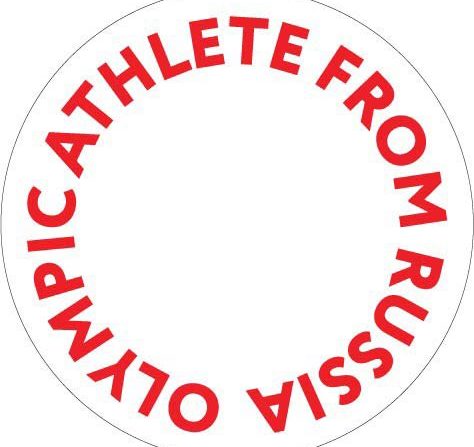 Russia has been banned from participating in the upcoming Winter Olympics due to a doping scandal, but there will still be a good number of Olympians hailing from Russia. Because they cannot actually represent Russia by wearing the colors of the Russian flag, however, those athletes will wear a rather generic color scheme of red and white, with a logo that did not come from the mind of a top graphic designer.

The logo proposed for Russian athletes simply reads “Olympic Athlete From Russia” in a circle.

The Russian Olympic Assembly recently voted to participate in the 2018 Olympics under a neutral flag, which is allowed by the International Olympic Committee as long as those granted permission to compete agree to follow outlined rules. That means there will be a Russian hockey team in the games. Earlier this week, a possible leaked image of the proposed jersey for the “Russian” team were unearthed to give a glimpse as to what the team could look like. It basically looks like the generic hockey team’s uniform you create in a video game’s custom-team mode.

Though the Russian flag will be nowhere to be seen on the athletes, it appears Russia will still be well-represented at the games. Russian officials believe at least 200 athletes from Russia will meet the requirements set by the IOC to earn a chance to compete in the games. But you will be excused if you mistake a Russian athlete for someone competing from Switzerland or Denmark with the logo and color scheme Russians will be adopting.

This is all a bit reminiscent of the 1992 Winter and Summer Olympics when the athletes from the old Soviet Union played under one generic flag as the Unified Team. This situation was different, however, because those athletes in the winter and summer Olympics that year qualified for the Olympics at a time the Soviet Union was crumbling and nations were gaining their independent identities. With all of those changes still taking place at the time the games were scheduled, the IOC allowed athletes to compete under the generic Unified Team, which adopted the Olympic logo as its flag and logo and the Olympic Hymn as its national anthem replacement.

The outlines for the Russian athletes mapped out by the IOC has not been universally praised, as you might expect. To some, these outlines do little to take Russia out of the games.

IOC releases guidelines on uniforms for Russian athletes & officials at the Winter Olympics their team is supposed to be banned from. Reads like a parody. The essential remains unchanged: Letting teams & individuals wear "Olympic Athlete from Russia" defeats much of the point pic.twitter.com/fM1fQQ3DFN

The logo design being used in the 2018 Olympics makes clear these athletes are from a nation that cheated. It’s as close to a scarlet letter as the Olympics could possibly get.