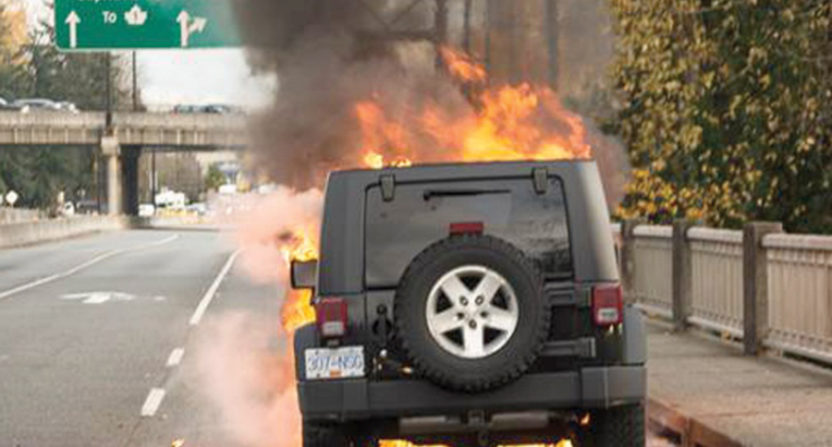 Victor Kraatz used to make headlines for his ice dancing, but on Thursday, he made the news thanks to a bizarre car fire.

Kraatz, born in West Germany in 1971, moved to Canada at age 15 and represented the country for over a decade on the international stage with partner Shae-Lynn Bourne, winning 10 Canadian championships, appearing in three Olympics (1994, 1998, and 2002, where they placed 10th, fourth and fourth) and becoming the first world champions representing North America in 2003, the highlight of the six medals they won at that event.

But Kraatz has been retired for a decade, working as a coach first for ice dancers and then for hockey players. And the news he made recently had nothing to do with his ice dancing past, but with his car suddenly catching on fire while he was driving, as Ben Bengtson of the North Shore News (North Vancouver, B.C.) writes in a story published Thursday:

Kraatz said that while driving on Marine Drive from West Vancouver at around 3:45 p.m. last Friday, near the Capilano River crossing just before the street turns onto the Lions Gate Bridge on-ramp, smoke started billowing from his car.

“All of a sudden there was smoke coming out of the hood and next thing you know the smoke filled the driver’s cabin. I pulled the car over, we all vacated, and just as we were watching it, it turned into an actual fireball,” he said.

He added that ICBC [the Insurance Corporation of B.C.] would be investigating the cause behind the apparent spontaneous combustion.

…He also gave a shout out to a good citizen who stopped to help Kraatz and his kids as they braved the elements outside while looking upon their burning vehicle from a safe distance.

“He saw that I was there with three kids and he pulled over and gave my kids a sweatshirt and toque because they were so underdressed because we had to vacate the car so quickly, everything was left in the car,” he said.

That’s incredible, but highly unfortunate for Kraatz and his family. But it’s good that they were able to get out in time and that no one was hurt, and it’s nice that someone was able to stop and help them out. Hopefully this doesn’t represent too much of a setback for them.