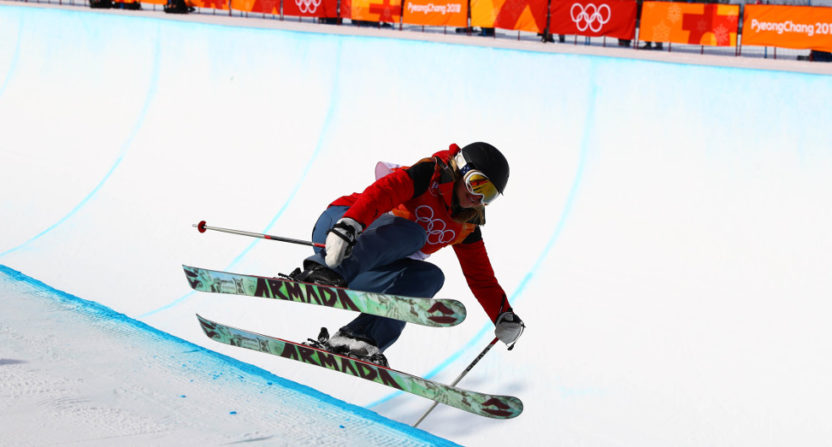 One of the most controversial Olympians at the 2018 PyeongChang Winter Games is Liz Swaney, the freestyle skier from Silicon Valley competing for Hungary thanks to “top-30” finishes in events with far less than 30 competitors. Swaney’s version of the halfpipe involves riding up one wall and then riding down the other without throwing a trick, only attempting a couple of incredibly-easy 180s late in the pipe and leaving NBC’s commentators stunned for words as a result. Her performance at the Olympics was worse than what you’d see from most kids at most ski resorts’ halfpipes. And yet, she told Will Graves of The Associated Press after her runs Sunday that she was “really disappointed” to not advance to the finals:

The words left Liz Swaney’s lips without an ounce of irony. No telling curl of the lips. No wink. Nothing. She meant them. All of them.

“I didn’t qualify for finals so I’m really disappointed,” the 33-year-old Californian said after coming in last in the 24-woman field during Olympic women’s halfpipe qualifying on Monday.

Even though her score of 31.40 was more than 40 points behind France’s Anais Caradeux, whose 72.80 marked the lowest of the 12 skiers to move on to Tuesday’s medal round.

Even though Swaney finished in about the same position in each of the dozen events she competed across the globe over the last four years in the run-up to the Pyeongchang Games.

Even though her two qualifying runs at Phoenix Snow Park featured little more than Swaney riding up the halfpipe wall before turning around in the air and skiing to the other side. It was a sequence she repeated a handful of times before capping her final trip with a pair of “alley oops”, basically inward 180 degree turns more fitting for the local slopes than the world’s largest sporting event.

That’s an amazing level of snark from the generally down-the-middle AP, but it’s completely fitting for Swaney. As previously detailed by Jason Blevins of The Denver Post, she’s only here thanks to finances that allowed her to head around the world to halfpipe events with less than 30 competitors and count those as “top-30 finishes”. What’s really remarkable is not just that she’s bad, but that she isn’t even trying any of the tricks normally seen in this kind of competition; it would be a lot easier to root for her if she at least attempted something, but instead, she’s seemingly trying to mock the sport. And her “really disappointed” comments are just incredibly stunning.

It’s been well-established that the Olympics are not just for the best of the best. Many of the most remarkable Olympic stories over the years have come from those who haven’t won medals, from the Jamaican bobsled team in 1988 through the Nigerian bobsled team this year to Tongan flag-bearer Pita Taufatofua‘s cross-country skiing efforts. and Kyoungeun Kim as the first South Korean to compete in aerials at the Olympics. But those athletes have all embraced their sports in a way that Swaney hasn’t. And that’s even true for some more purely publicity-focused entries like British ski jumper Eddie “The Eagle” Edwards, or bobsledder Prince Albert II of Monaco, or skier Prince Hubertus of Hohenlohe-Langenburg. Yes, none of them were ever medal threats, and the princes’ main qualification was “being rich” (similar to Swaney’s), but at least they took their sports somewhat seriously. Swaney’s story seems far closer to that of Gary di Silvestri and Angelica Morrone, the  Americans who “represented” Dominica in cross-country skiing in the 2014 Sochi Olympics by buying citizenships and then giving up before their race (in her case) and shortly into it (in his case).

Swaney clearly qualified according to accepted procedures (even if those are now going to be revised to keep a similar situation from happening again), and that’s fine. If she wants to spend her money to go place last or next to last in qualifying events and earn an Olympic berth as a result of it, that’s the fault of a loophole in the system, and it’s probably a better investment than her campaign for California governor at age 19 or her previous attempt to take up skeleton. Her “halfpipe” runs involving no actual tricks don’t carry any real risk, and the system let her come to the Olympics that way. But her complaints of being “really disappointed” are insane, as are her claims of “I still want to inspire people to get involved with athletics or a new sport or a new challenge at any age in life.” It might be more inspiring if she actually tried the sport instead of just making it to the Olympics thanks to a limited field in many events and then just casually gliding down the halfpipe, insulting the rest of the competing athletes in the process.