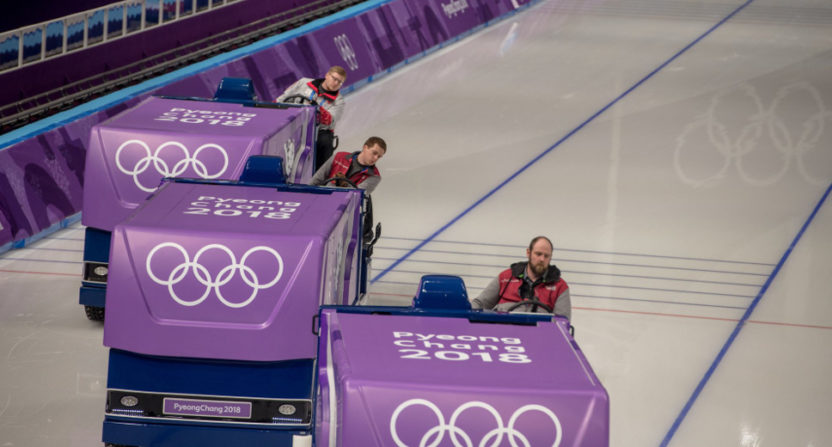 The Winter Olympics have a whole lot of on-ice events, and that necessitates a whole lot of Zamboni ice-resurfacing machines. But despite the 2018 Games being held in in PyeongChang, South Korea, the people running those machines are mostly from the United States and Canada, as John Branch explores in an excellent New York Times feature.

There are some fascinating quotes in Branch’s piece about just why that is:

“I can teach anybody to drive the Zamboni,” said Don Moffatt, overseeing a team of 16 drivers at the ice hockey arena, “but it takes many, many years to learn how to actually operate it and operate it properly.”

The Olympics, he added, “are not a place to train people.”

…Moffatt used an all-Korean crew during hockey test events here last year, with the idea he might do the same during the Olympics. He discovered that younger Korean drivers deferred to older drivers, afraid to disrespectfully show them up with their skills. But five of them had enough talent, he thought, to be invited to the Olympics.

Beyond that, South Korea only has a couple dozen rinks, so there aren’t a lot of local drivers in the first place. And none of those rinks have two ice-resurfacing machines, so the local drivers don’t have experience in the idea of having two Zambonis on the ice at once.

Moreover, many of the Olympic venues (including the speedskating oval) are planned to be converted to non-ice purposes after the Games, so there isn’t a big chance of Koreans gaining permanent jobs from this, and some of the talented drivers couldn’t get the six to eight weeks off from their normal jobs that would be needed for this.

There are also plenty of benefits of having experienced crews here, as each sport requires drastically different ice; for example, figure skating needs thick, soft ice, while short-track (at the same arena) needs colder, firmer ice. Furthermore, while maneuvering the Zamboni around the ice isn’t that hard, properly adjusting the blade height and water flooding levels takes a whole lot of experience. And for some drivers, like Minnesotan Ryan Hevern, this is a family tradition:

Hevern is one of the Zamboni drivers for hockey. He learned to drive from his father, whose “claim to fame,” Hevern said, was having “his ice” appear in the movie “The Mighty Ducks.”

“He texts me every couple of nights,” Hevern said. His voice hitched. “I get choked up even thinking about it. He’s very proud.”

That’s pretty cool. Branch’s story overall is a great look at the challenges of ice-making, something that’s crucial to the Olympics and not often fully explored. And it is an important skill, and one worth importing people for.