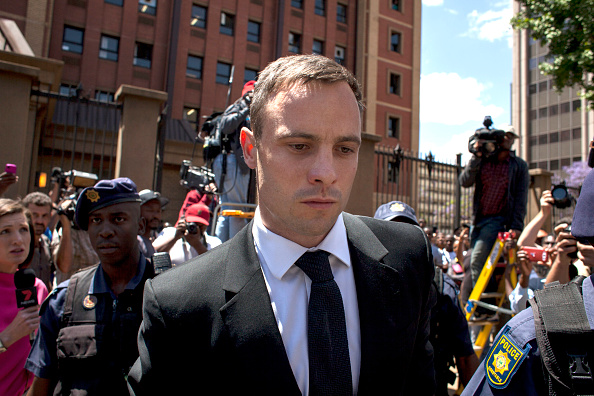 Oscar Pistorius is a free man, for now.

A Pretoria judge ruled that the 29-year-old former Paralympic Gold Medalist will remain free on bail, until he’s sentenced for murder in April and as he appeals his conviction.

Pistorius, nicknamed “Blade Runner” experienced one of the biggest falls from grace in sports history, inspiring many after becoming the first double-leg amputee to compete in the Olympics in London 2012, where he ran in the men’s 400 metres and 4 × 400 metres relay. Fast forward two years later, and he was convicted of shooting and killing his girlfriend, Reeva Steenkamp, through a bathroom door after a 2013 Valentines Day incident.

The Pistorius legal case has been unprecedented in both its profile, and its constantly changing outcome. South Africa’s Supreme Court of Appeal overturned his conviction for culpable homicide and found him guilty of murder just last week. Originally, Pistorius was sentenced to five years, but was paroled after one. He now faces a minimum of 15 years in prison, only he is again out on bail.

The latest ruling by Judge Aubrey Ledwaba says Pistorius must pay 10,000 rand ($700) in bail, remain under electronic surveillance, surrender his passport and stay within 20 KM of his Pretoria home, where he’s been under house arrest since being released in October.

Pistorius’ defence team plans to appeal the murder conviction, but as the report states, the chances of succeeding are remote, as he’d need to prove his constitutional right to a fair trial was violated.

“I don’t think in my opinion his rights were infringed on at all but I wouldn’t be surprised if there is an application,” Ulrich Roux, a criminal attorney not affiliated with Pistorius told the Washington Post.

Anytime the murder laws of one country become international news in many others, confusion is expected. The conviction parameters in the United States are not the same as South Africa. Still, this case, with its constantly changing verdict, is particularly confusing, leaving many unsure if Pistorius will spend a decade plus in jail, or no more time at all.