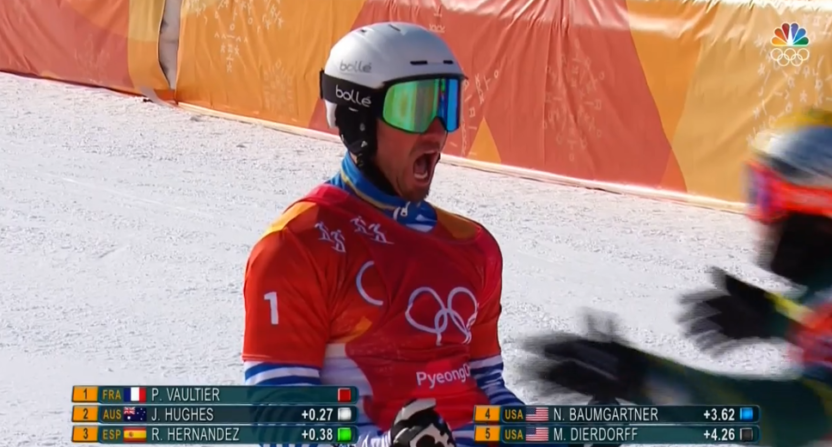 Snowboard cross is a marvelously insane Olympic event, a race featuring high speeds, massive jumps, and inevitably, crashes. Those crashes normally knock you out of contention, but that isn’t always true, and surviving a crash proved key to France’s Pierre Vaultier earning his second straight Olympic gold in the event Wednesday night. Vaultier won the event in 2014 in Sochi, but seemed in trouble this time around; he did well to advance through the first round and the quarterfinals (the top three finishers in each elimination heat advance, and Vaultier was second in the first round and first in the quarterfinal), but then crashed during the six-man semifinal, which might have doomed his medal hopes.

What allowed Vaultier to survive? Well, one rider crashed before him and two others went down with him. While the two unscathed riders (Australia’s Alex Pullin and Jarryd Hughes) moved on easily, Vaultier managed to get up before anyone else in the field and make it into third. Here’s the crash:

And here’s Vaultier pulling himself back up and making it across the line:

Here’s a replay of the crash:

Amazingly, this wasn’t even the biggest crash of the day. That came in the second semifinal, where Canada’s Chris Robanskie went down hard and Germany’s Martin Noerl slammed into him. And that paved the way for American Mick Dierdorff, who had crashed higher up the run, to get back up and shoot past Noerl to take third and advance to the final while Noerl was still trying to hop to restart:

The final saw yet more drama, with three riders crashing off a jump, leaving Vaultier, Hughes and Spain’s Regino Hernandez to compete for the medals.

Vaultier came out on top, and had quite the shout of joy.

That’s a fitting way to cap off a great run, one thoroughly worthy of his second Olympic gold medal. But he only got there thanks to a more unusual skill; getting knocked down, and getting back up again. Maybe we can call that the Chumbawamba Olympics?