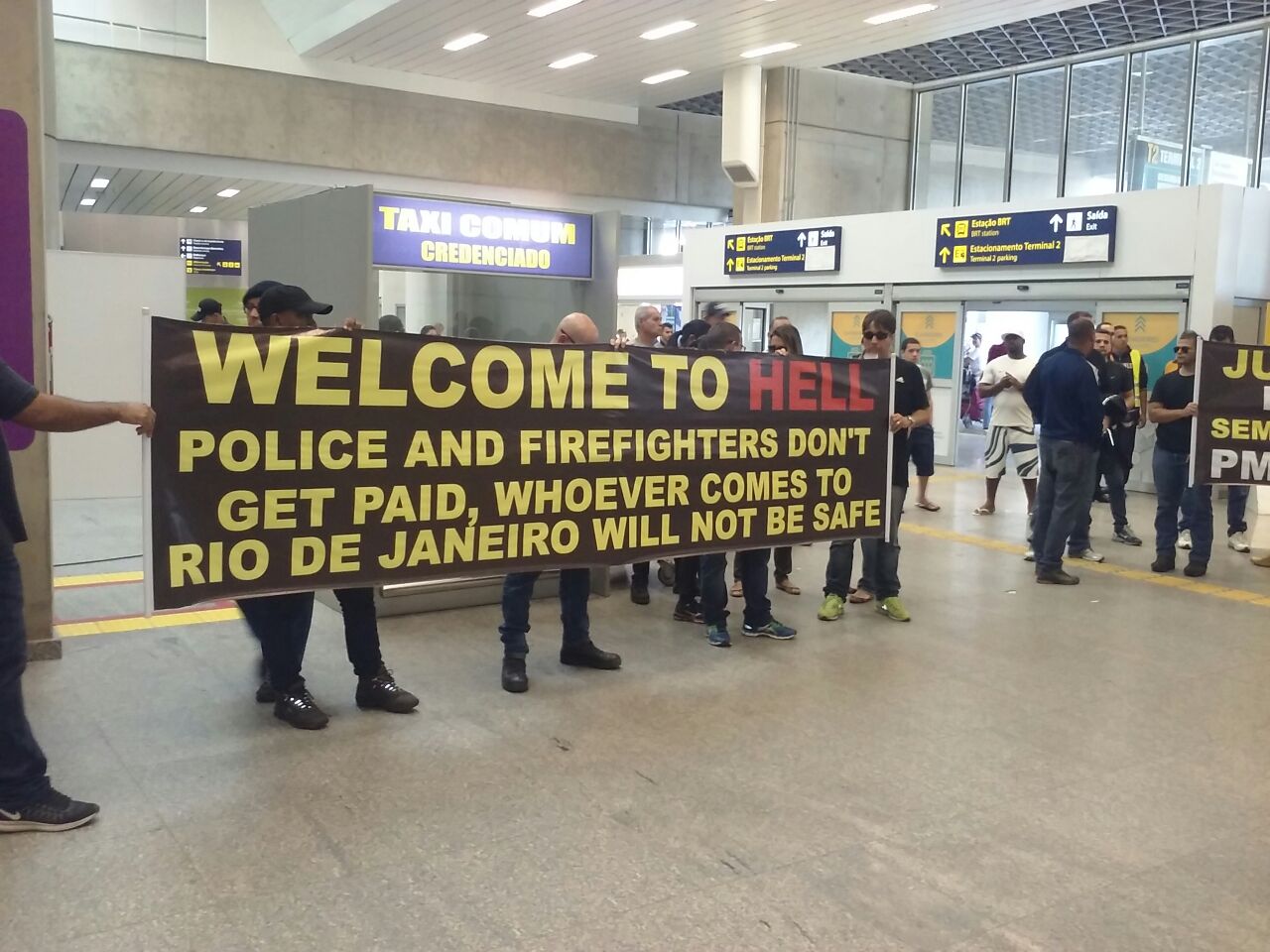 In most cities around the world, the job of the local police force is to keep citizens and visitors to their community safe. Well, that may not be the case in Rio de Janeiro next month.

With just 31 days left until the Olympic flame is lit inside Rio’s Olympic Stadium, police officers are telling tourists they may not be able to protect them.

Violence within the host city is on the rise, police officers reportedly haven’t been paid consistently for months, if at all, and the government just declared a state of emergency.

*Everything won’t be fine dot gif.*

This past week, police officers stood outside the Rio airport with a sign that said “Welcome to Hell” and “Police and firefighters don’t get paid, whoever comes to Rio de Janeiro will not be safe.”

It’s probably safe to say that’s not the warm welcome tourists expected to see and the International Olympic Committee thought would happen when it awarded Rio the games way back in October of 2009.

But it’s not just tourists that won’t be safe during the games. Local citizens of Rio and the surrounding favelas are in danger as well. Via CNN:

“It seems like there is an order [from authorities] to put fear in people so they stay calm, so they don’t cause trouble in the city because the foreigners can’t see that the city is chaotic,” Higor da Silva, a resident of the Mare favela, recently told CNN. “They [state police] don’t care if there is a child in the middle — they shoot their target.”

Security officials have told CNN and other news outlets officers who use excessive force when it isn’t deemed necessary have been removed from their jobs. On top of that, use of heavy weapons has gone down.

Still, that may not be enough to protect citizens and tourists throughout the games.

Part of this issue is due to the government and cities lack of money. Last week, a $850 million dollar buyout was made available in Rio after an executive order requesting emergency funds.

“We are numbers, nothing more,” one officer told CNN. “You encounter a drug trafficker armed with lots of ammunition and you only have only 20 bullets. It is absurd.”

The officers CNN spoke with who wished to remain anonymous went on to say part of the issue comes from the city having police work mostly in tourist areas. So instead of more police in the Favelas where most of the crime happens, they are at the beaches or near the Olympic sites.

So while it seems like in one way police are doing their jobs, that’s not always the case.

“Brazil has one of the highest levels of homicides in the world, with around 42,000 people killed with guns every year,” Atila Roque, Amnesty International’s Brazil director, said in a statement. “Those living in the most marginalized areas of the city are disproportionally affected by this crisis.”

In 2014, when Brazil hosted the World Cup, police in Rio killed 580 people, a 40% increase on 2013, according to Amnesty International. The figures from AI’s report state that of those 645 killed, most were young, black men from the poor areas of Rio.

Regardless of those numbers, if the police have struggled in the past and are now welcoming tourists at the airport with signs like “Welcome to Hell,” one can assume the Rio games may not be the safest Olympics on record.

Once again, only 31 days until the games begin.