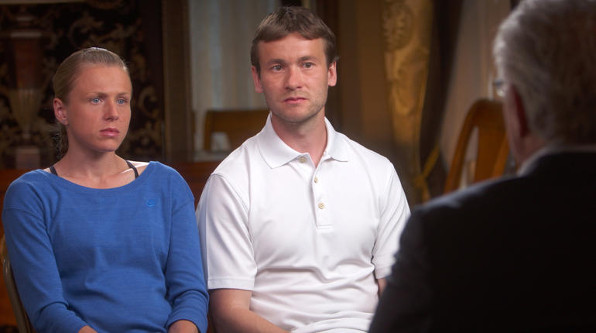 The Summer Olympics are approaching quickly, but Russia continues to battle an image problem as it bounces back from a doping scandal. The details of the doping scandal were brought to light by two Russians who now reside in the United States.

Yuliya Stepanov, a runner, and Vitaly Stepanov, who collected blood and urine samples, got a chance to tell their story to 60 Minutes this week. The segment run by 60 Minutes reported as many as four gold medal winners from Russia in the 2014 Winter Olympics in Sochi were on steroids.

Stepanov admitted to taking anabolic steroids for strength and blood-boosting substances for endurance over the span of more than five years. She claims she did so under direction of her Russians coaches and medical staff members.

“It’s hard to believe you’re doing something wrong when everybody around you says it’s right, and there’s no other way that you’re shown,” Yuliya told 60 Minutes. “I was an untouchable, a sacred athlete.”

Yuliya confessed to Vitaly, an employee for the Russian Anti-Doping Agency referred to as RUSADA, 15 minutes into their first date that she was doping.

“I had suspicion but I was hoping that I’m here to fix something,” he said. “She says that’s not what RUSADA does. RUSADA helps Russian athletes to win medals. RUSADA does testing, but fake testing.”

Vitaly fought off bribes and ran into brick walls when trying to do anything about it. Frustrated with not being able to do the right thing and make sports Russia was competing in more fair, Vitaly made the decision to go outside of Russia to report his information. Though he fought to do the right thing, he eventually lost his job, and it led to a planned divorce from Yuliya. However, shortly before that divorce was going to be finalized, Yuliya  made the decision to break her silence before the 2012 London Olympics after being injured, testing positive for EPO, and learning that the Russian system wouldn’t protect her thanks to her lost status as a medal contender. Yuliya contacted Vitaly to get back together, and he convinced her that they could expose the system’s problems, saying “Let’s tell the truth. Let people know the whole truth, the way things happen in Russia. To destroy the system one has to talk about it.”

Not only did Yuliya join Vitaly’s cause, she started secretly recording her coach giving her steroids, her teammates talking about their own steroid use (including 800-meter runner Mariya Savinova, who won gold in London), and the team medical director telling her how to get back on the steroid program. The Stepanovs got in touch with WADA, which then put them in touch with a reporter from German TV station ARD, and those recordings proved a pivotal part in the 2014 documentary that helped kickstart wide awareness of the doping problems in Russia.

What’s really notable in the 60 Minutes report are the conversations over the last few months Vitaly secretly taped with former Russian drug-testing lab head Grigory Rodchenkov, who was fired amidst the scandal and now lives in the U.S. as well. There are some huge implications to those:

When it came to doping in Russia, nobody was more powerful than Grigory Rodchenkov. He ran its drug-testing lab and had the ability to make positive drug tests disappear. The WADA report called him the heart of Russian doping. In the wake of the scandal, Rodchenkov was fired by the Kremlin and has since taken refuge in the U.S., for fear of his own safety because of how much he knows.

Over the last few months, Rodchenkov has been sharing what he knows with Vitaly Stepanov. What he doesn’t know is that Stepanov has recorded 15 hours of their conversations. What Rodchenkov has revealed threatens the credibility of the results at the 2014 Winter Games in Sochi, Russia.

Vitaly Stepanov: He told me what I and Yulia did, we could only see this much. But what was happening with cover-ups, it’s like this.

Rodchenkov, who ran the drug-testing lab in Sochi, bragged he was in possession of what he called “the Sochi list,” the Russians who competed dirty at the games. He also said the Russian equivalent of the FBI — the FSB — was directly involved.

Armen Keteyian: What did he tell you about the FSB, the Russian intelligence officers and the Sochi Lab?

Vitaly Stepanov: That some FSB agents worked as doping control officers during the Sochi games. That FSB tried to control every single step of the anti-doping process in Sochi.

We have listened to all of the conversations. And the biggest bomb dropped by Rodchenkov was this: at least four Russians won gold medals at the Sochi Olympics while on steroids, and his lab covered it up. A representative for Rodchenkov told us, for now, he was not available for comment.

The whole report is quite something, and the Stepanovs appear to have played a major role in altering Olympic sport going forward, especially in Russia. Their revelations will have many looking back at past Olympics and potentially-tainted performances, too.