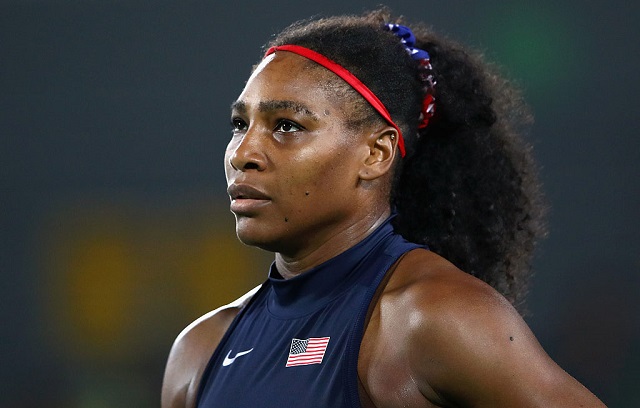 The 2016 Olympics tennis tournament has seen its fair share of shocks in the early rounds, though none were bigger than Elina Svitolina’s straight-sets upset of World No. 1 and top-seeded Serena Williams in the women’s singles. The upset leaves a lot of questions now, including — but not limited to — who is in prime position for the Gold in women’s singles and what happens to Williams from here.

First of all, the women’s draw is now wide open. NBC may no longer care to show any of it due to the lack of star power — Maria Sharapova is still suspended and French Open champion Garbine Muguruza also lost in the third round — but there are medals there for the taking. The top half of the draw is wide open, with the winner of Svitolina’s next match — against two-time Wimbledon champion Petra Kvitova — very likely to reach the final. Casual American tennis fans may know the name Madison Keys. If you don’t, it’s worth learning, as Keys has an excellent chance to medal out of the upset-riddled bottom half of the draw.

However, the more pressing issue is what exactly this loss means for the World No. 1. To really think about this, we have to understand exactly what the Olympics mean in tennis. Of course, a real discussion of that would be book-length at minimum, so I will sum it up by saying that Olympic tennis can mean drastically different things to different players. Throughout her career, Williams has shown that she does not care about the Olympics as much as some others do — and certainly not as much as she values the Grand Slams.

I am not saying that Williams doesn’t care about the Olympics. Far from it. I am saying, though, that in the grand scheme of her career and her seasons, Williams has placed a lower priority on winning medals than on winning other tournaments — and this should be especially true after she won singles Gold in London four years ago. Unlike older sister Venus, who has explicitly said that she values Gold Medals over Majors, the younger Serena has always seemed to place a lower priority on the Olympics. Indeed, she told media at Wimbledon this year that she cares more about winning Gold in doubles — with Venus — than in singles. (The article is no longer there, but the tweet that once linked to it remains.)

Serena Williams reveals that #olympictennis gold in doubles would mean more to her than in singles… http://t.co/lzDZmlCK

After the doubles pair lost in their opening round on Sunday to the Czech pair of Lucie Safarova and Barbora Strycova, it was easy to wonder how much motivation Williams would have to continue in the singles event. She appeared to fight and compete hard in her loss to Svitolina, though, letting loose with her classic “come on”s and full-bodied fist pumps after winning big points. So what, exactly, led to this loss — and should it be a matter of concern for the future?

To start with, Svitolina played extremely well. She played with tremendous depth and never once let the World No. 1 overpower her. The 21-year-old Ukrainian was always going to become a star in the game of women’s tennis; the only question was when. It’s not like Williams lost to a (relative) nobody, even if most of the casual tennis world is not yet familiar with Svitolina’s name. She is a top 20 player whose ranking is only rising.

There were definite worrisome signs in the match for Williams, though. She hit a lot of unforced errors, far more than usual. Additionally, the final break of serve in the match — the one that ultimately lost her the match — was a bizarre game that included five double-faults, including on the final three points to give away the break. Williams also withdrew from the Rogers Cup in Montreal last week with a shoulder injury, so this has to be concerning to fans.

After the loss, Williams declined to speak to press, which only fuels speculation and confusion as to what is going on. She did release a statement through a Team USA spokesperson that she was disappointed in the loss, also giving credit to her opponent.

Today had a lot of unexpected moments. None more than an early exit from Serena Williams. https://t.co/WoaTkeKxpy https://t.co/yKCs6eaTfF

Where does this leave the World No. 1? There will be rumors and speculation, but as of now, it’s impossible to really know anything. She is not scheduled to play at the Western & Southern Open in Cincinnati next week, so the next time anyone sees Williams play competitively will be at the US Open. She could always request a Wild Card into that event, so long as they have not yet all been given out, but that seems unlikely — even though she could lose the No. 1 ranking if Australian Open champion Angelique Kerber wins the tournament.

Whether the loss in Rio was just due to a bad day on the court or some lingering physical issue is just something that we will have to wait to find out.

All Four No. 1 Seeds Lose Early in Rio

Williams was not the only top tennis seed to fall early in these Olympics. Men’s singles top seed Novak Djokovic was upset by Juan Martin Del Potro in the first round on Monday. Djokovic vs Del Potro was a highly-anticipated match as soon as the draw was made, due to Del Potro’s talent. The 6-foot-6 Argentinian won the US Open back in 2009, but is not seeded in Rio because he missed significant time in the past 12 months due to injury.

In addition to that, both top seeds in doubles lost as well. As mentioned above, the Williams sisters lost in the first round to the Czechs. The top-seeded men’s doubles team, Frenchmen Pierre-Hughes Herbert and Nicolas Mahut, also were upset in their first-round match. When combined with the fact that the Bryan brothers elected not to compete in Rio this year, this means that the men’s doubles draw is really anyone’s tournament.

There are plenty of medals up for grabs in Rio with all of these upsets. We will probably see a surprise medalist or two. Or maybe, in fact, we will be surprised by how unsurprising some of the medalists are. Rafael Nadal is still alive and in the mix for three Gold Medals — men’s singles, men’s doubles, and mixed doubles. With all of the talk that everyone else is getting and with little attention being focused on him, it would be just like the Spaniard to surprise us with success when we least expect it.