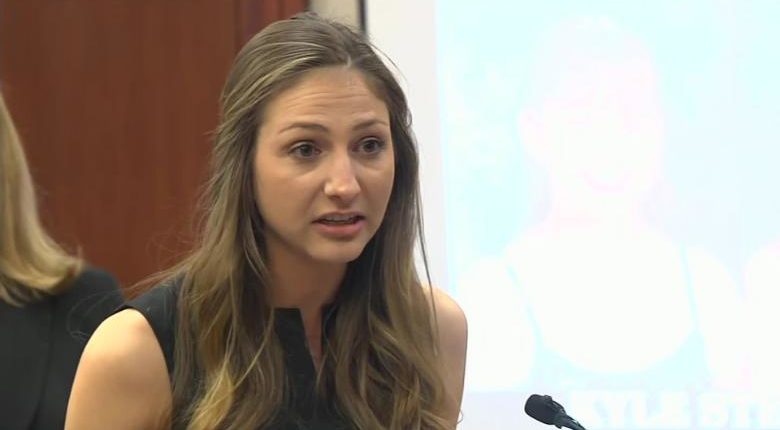 Former USA Gymnastics doctor Larry Nassar appeared in a courtroom in Lansing, Michigan on Tuesday to be sentenced on sexual abuse charges. There, he heard from Kyle Stephens, whom he began molesting when she was only six years old.

“Perhaps you have figured it out by now, but little girls don’t stay little forever,” she said. “They grow into strong women that return to destroy your world.”

This clip of Stephens’ comments is well worth watching, though we should warn it is very graphic. Stephens, the first of many victims who will speak at Nassar’s sentencing, explained how he masturbated in front of her, rubbed his penis on her feet and penetrated her vagina with his finger.

Nassar has been accused of sexual abuse by more than 140 women, including Olympians Simone Biles, Gabby Douglas, McKayla Maroney and Aly Raisman. He has already been sentenced to 60 years in federal prison on child pornography charges and will face several decades more when the sentence comes down from Michigan state court.

Stephens was one of many victims to confront Nassar on Tuesday. She described the enduring effects of Nassar’s abuse, including how it damaged her relationship with her parents for years.  Via NBC News:

“Without my knowledge or consent, I had engaged in my first sexual experience when I was in kindergarten,” said Stephens, the only accuser who was not molested as a patient of Nassar’s medical practice.

She was 12 years old when she finally told her parents about the abuse. They confronted Nassar and he denied it.

Stephens’ voice cracked as she said: “My parents chose to believe Larry Nassar over me.”

Her allegation fractured her relationship with her parents, she said. Every time she and her father got into an argument, he would tell her, “You need to apologize to Larry.”

Other victims reportedly spoke of the impact of Nassar’s abuse had on their lives, while one mother of a former Nassar patient blamed the doctor for her daughter’s suicide.

Donna Markham spoke on behalf of her daughter, Chelsey, who committed suicide in 2009, the end of a downward spiral that began with a single visit to Nassar’s office when she was 10 years old.

Raisman tweeted Monday that she would not attend the sentencing but would have an impact letter read in front of the court.

I will not be attending the sentencing because it is too traumatic for me. My impact letter will be read in court in front of Nassar. I support the brave survivors. We are all in this together. #StopAbuse

Nassar’s sentencing is expected to last at least through this week, as dozens of victims read statements about his abuse.