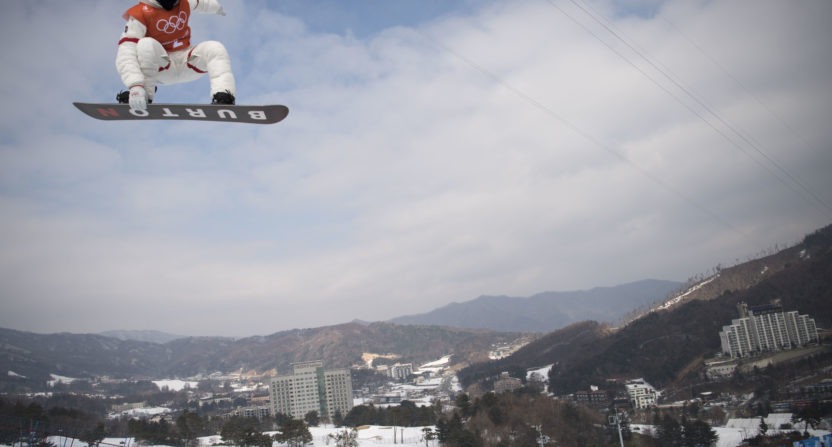 Monday at the Olympic Games was America’s snowboarding past and future, as both were on display in the halfpipe. On the day Chloe Kim dominated the women’s field to win her first of what could be a handful of gold medals in her career, Shaun White stormed back to let everyone know he is not messing around on his return to the games.

Four years ago at the 2014 Games, it appeared as though the world of snowboarding was seeing the torch handed off from the iconic Shaun White to the new generation of snowboarders. But if Monday’s qualifying runs were any indication, White is not ready to step off the top spot on the podium for good just yet.

Two words for you:

Since his debut at the 2003 X Games, White has been the snowboarder to beat in virtually any competition involving a halfpipe. White won gold at Winter X in 2003, 2004, 2005 and 2006 before making his Olympic debut with a gold medal in 2006. White quickly took the Olympic scene by storm with his gold medal performance in Turin, Italy. He followed that up with another gold medal showing four years later in Vancouver. Nobody could stop White. Instead, everyone else was battling for the silver medal coming into the Olympics. But that changed four years ago.

After dominating his qualifying run with an astounding 95.75 to automatically clinch a spot in the finals, White made a rare error on his first run in the finals, and his second run was not the impressive and clean run that had become expected of White. White finished in fourth place with 25-year-old Iouri Podiadtchikov of Switzerland winning gold, and Japan’s Ayumu Hirano (15-years-old) and Taku Hiraoka (18-years-old) finishing in silver and bronze, respectively. At 27 years of age, White was still a young guy but it appeared as though the writing was on the wall and he was quickly growing too old for the snowboarding scene to compete at such a high level.

Or so it was thought.

White stepped back from the X Games this year while battling the flu to help keep his focus on the Olympics. If White’s qualifying run on Monday was any indication, he will continue to be an absolute force to reckon with in the finals. White dropped a 93.25 in his first qualifying run of the night, setting the bar incredibly high right out of the gate.

White scored roughly two points higher than fellow American snowboarder Ben Ferguson, the only other competitor to crack 90 points in the first qualifying runs. But the heat would turn up in the second round as Japan’s Hirano took the lead on his second qualifying run with a 95.25. Australia’s Scotty James then continued to raise the bar with a qualifying run of 96.75.

Seeing the pressure being put on by some of the stiff competition, White ended the night by making sure he would be the last one standing going into the finals with a 98.50 on his second qualifying run.

And with that, the stage is set for a great showdown in the finals. White will have to continue staying on top of his game the way the competition is unfolding. James won gold at the 2017 X Games and is a two-time world champion on the halfpipe. Hirano is primed to add a gold medal to his budding collection that includes the silver in Sochi. All three were brilliant in the qualifying rounds and went all out to impress the judges when it is fairly typical to hold back a few tricks before the finals. If these guys were holding back, you will not want to miss the finals.

White’s triumphant show in the qualifying rounds proved the legend in the sport still has a few tricks to show off, but the American snowboarding scene saw a new legend quickly leave her mark in the Olympics earlier in the day. Chloe Kim, just 17-years-old, won Olympic gold in the halfpipe after crushing the competition on her first run of the day. Kim was the only woman to record a score higher than 87.75 which was good for a silver medal for China’s Liu Jiayu. Kim soared to victory in dominating fashion after scoring a 91.50 on her first run and then going on a victory lap in the final run of the event for a 95.60.

GOLD for Chloe Kim! The 17-year-old has done it for Team USA in the women's snowboard halfpipe! #BestOfUS #WinterOlympics https://t.co/D65Nuoyydu pic.twitter.com/PtMvQ45SLh

Like White at a young age, Kim has the personality that will win over anyone watching. The youthful innocence of Kim’s dynamic display in the Olympics is reminiscent of White’s first trip to the Olympics. Not only are they incredibly good at their craft, but they also live in the moment the way you would expect a senior in high school to do so.

you, when your coworker is telling you about how ~*great*~ their vacation was pic.twitter.com/LaSK1kWfZv

Chloe Kim is just getting started. White may very well be looking to leave his mark one last time on the Olympic podium. It is safe to say the snowboarding scene in the USA is in great shape for years to come.