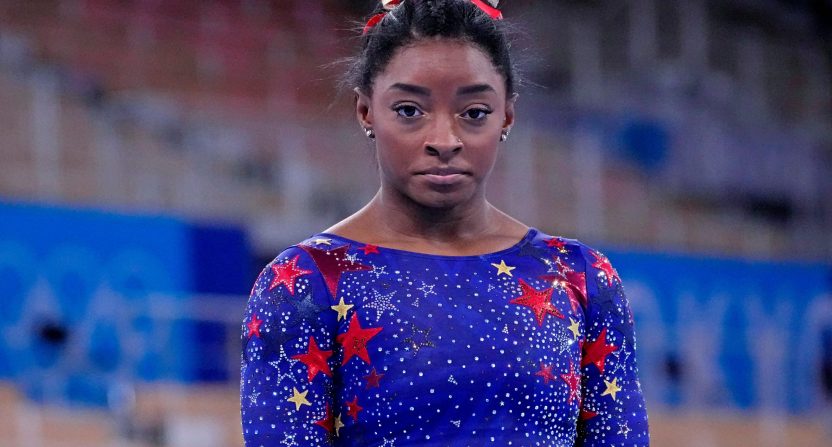 After participating in the vault, Team USA gymnastics star Simone Biles exited the team all-around competition for a “medical issue.” In speaking with the media, Biles revealed that she “didn’t want to risk the team a medal” due to her screwing up and would see about Thursday in the individual all-around. Biles had been making some errors during qualifying and after a poor run on the vault, felt it was best to not tempt fate in her current mental state and risk making more errors and hurting the team.

After exiting the competition, Biles was on the sidelines cheering on her teammates and getting them what they needed as they finished the competition. Suni Lee stepped in on the other three events and along with Jordan Chiles and Grace McCallum, finished with the silver medal as the Russian Olympic Committee (a.k.a. Russia) won gold.

Despite some criticism, the vast majority of those within the sports world are getting behind Biles for her difficult, but necessary decision. Maybe this doesn’t happen in past years but with more and more of an acceptance toward mental health, more and more people are understanding the rigors of what an Olympic athlete goes through. Especially one who is most definitely the face of her sport.

simone biles remains the greatest of all time

Simone, you’ve made us so proud. Proud of who you are as a person, teammate and athlete. We applaud your decision to prioritize your mental wellness over all else, and offer you the full support and resources of our Team USA community as you navigate the journey ahead.

You can’t pick and choose when you want to support an athlete’s decision to protect their mental health and peace. It takes a lot of strength and vulnerability to do what Simone Biles did.

Simone Biles is still a 🐐…gold medal or not. #Olympics

All love and light to Simone Biles! Still the GOAT and the ultimate teammate. We are incredibly lucky that you represent us so beautifully. 🇺🇸♥️

In my eyes, Simone Biles already won. She’s a class act and she’s still the greatest gymnast in history. Our Champion. 💙👏🇺🇸

That is… it's honestly so endearing and relatable. Our biggest challenges may not be the Olympics but we can say "I'm not okay today"

My heart is breaking for @Simone_Biles. 💔She’s held to a standard much higher than anyone else which is a burden no human being can carry, even the best in the world.

I’m so grateful she made the decision to take care of herself. #SimoneBiles

Some people would have the rest of us believe that an elite athlete has an obligation to compete through injury.

And I sure as hell don't want those people anywhere near sports.

Sending so much support to @Simone_Biles rn. It's hard to imagine all the pressure she's feeling. The weight of the world can be heavy, so I hope she knows we all love her and are so proud of her.

We are blessed to live in a time where Simone Biles leads the way in prioritizing athletes health, both mental and physical. Of all her accomplishments, this might be her greatest yet. She is truly the GOAT. 🐐 #ArtisticGymnastics #Olympics #Tokyo2020 pic.twitter.com/GLoX20nPXE

Simone Biles pulling out of the team all-around doesn’t mean she’s mentally weak, it’s in fact quite the opposite. She’s already gone through more in her young life than most people will go through their entire life.

Biles revealed she was sexually assaulted by former USA Gymnastics physician Larry Nassar who is currently incarcerated for repeatedly sexually assaulting minors. Biles has competed through physical injuries, including this Olympics. On her Facebook Watch docuseries, Biles revealed she’s had a ligament injury in her foot in the run-up to Tokyo and is taping her foot because there’s no time for rehab. And on top of all this, Biles is the face of gymnastics and has literally said she feels she has the weight of the world on her shoulders and can’t wait for the Olympics to be over.

After all that, Biles went out there and tried and realized she didn’t have it today. The idea of someone acknowledging (and admitting) they’re being a detriment to their team shows a form of mental strength that very few people have or can even understand. Simone Biles might be the GOAT but if she can’t get into a mental state to pull off moves that literally no other human being can do, then she is hurting her team and might potentially hurt herself. To ignore that and not listen to what her body and her mind is telling her, that would’ve been mentally weak.