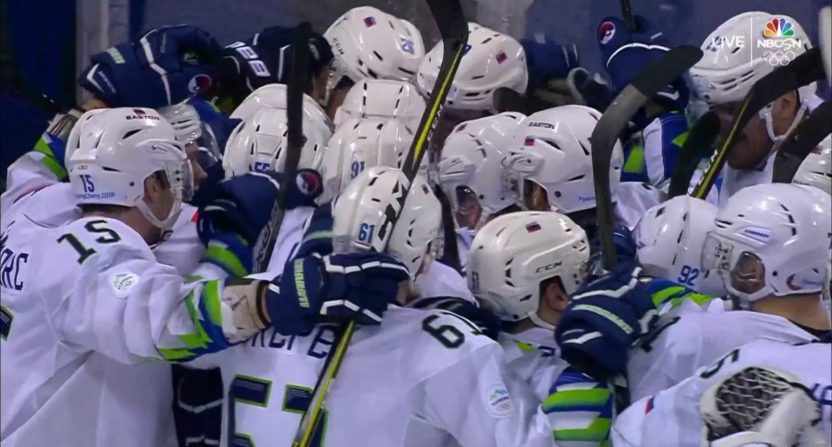 The Olympics are underway without NHL players taking the ice for the first time since 1998. After just one game, the impact of not having NHLers on the ice reared its ugly head for the United States when a young team of future NHLers couldn’t manage to close the door on Slovenia in their Olympic opener. The team of Russians, designated as the Olympic Athletes from Russia, also suffered a disappointing loss in their opener, making for a wide-open pool.

The United States had a 2-0 lead going to the third period, but Slovenia rallied in the final period, tied the game with just over a minute to play after pulling the goalie from the net, and then scored a game-winner in overtime to grab a big win.

The @usahockey men's team has its first goal of the #WinterOlympics! https://t.co/snOfK8WaVF pic.twitter.com/Y7v0IO3p1c

Slovenia wins it, 3-2, in overtime. pic.twitter.com/DNvpZjNHlN

How big of a setback is this for the United States? It’s a pretty devastating one out of the gate. Slovenia is a nation that did not qualify for the Olympics from 1998 through 2010 and then finished in seventh in the 2014 games in Sochi. This is Slovenia’s second Olympic appearance in the men’s hockey tournament, and they are the 15th-ranked nation in the world according to the 2017 IIHF World Ranking. The United States arrived at the Olympics ranked fifth in the world, behind Canada, Russia, Sweden, and Finland.

Tournament favorite Russia loses opener to Slovakia. USA loses to Slovenia. That's all you need to know about the men's Olympic hockey tournament this year. Sure looks like a wide-open tournament!

Russia hasn't won hockey gold since 1992, any medal since 2002. With no NHLers this time they have big advantage. Open with dreadful 3-2 loss to Slovakia anyway.

Game on in men's hockey! Slovenia just beat the US 3-2 in OT, and Slovakia topples (Olympic Athletes of) Russia 3-2.

Opening pool play with losses is a major hurdle for both the United States and the Russians, but it is still too early to pack it in for either team. The next games for these two teams may be must-win games (United States vs. Slovakia and OAR vs. Slovenia on Friday), because the Americans and Russians face off in the final game of pool play on Saturday. Every team will advance to the next round, but the top team in each pool automatically qualifies for the quarterfinals and the second top team has a shot to go right to the quarterfinals. Avoiding the quarterfinal playoffs is the goal, and perhaps the expectation for the United States and Russia, but that is in jeopardy just one game into the tournament.

We’ll see if Canada, Sweden, and Finland can avoid similar disasters in their first games of the men’s hockey tournament in the next two days. But for now, it sure seems as though not having NHL players in the Olympics has leveled the playing field for the international hockey tournament.