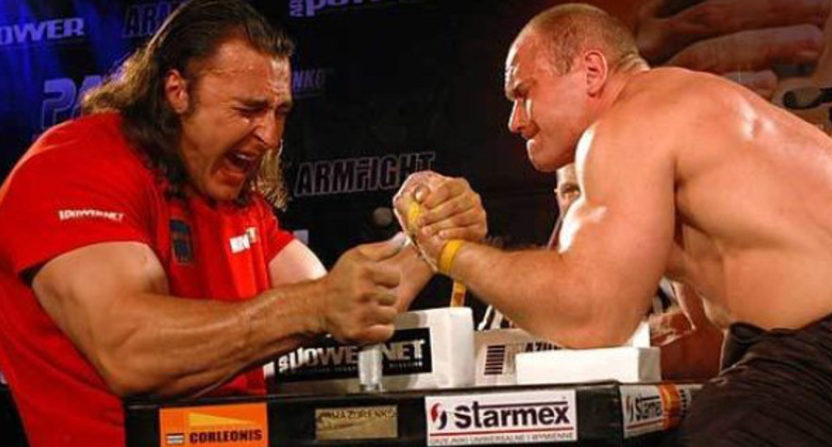 The fight between the International Olympic Committee and Russia over doping is heating up. Last summer, the IOC overruled the World Anti-Doping Agency’s recommendation to ban all Russian athletes from the Rio Olympics and left the decision up to individual sports federations, with only track and field and weightlifting opting for team-wide sanctions, but since then, they’ve applied much more pressure, and two days of WADA meetings with Russian authorities this week will play a major role in deciding if Russia’s anti-doping agency will have its accreditation reinstated and what that means for Russian participation in future Olympics.

But one big hurdle on the table appears to be that Russian officials are refusing to accept the findings of WADA investigator Richard McLaren’s report from last year, and that they’re proving quite combative, as this quote from Alexey Voyevoda (who won gold in the 2014 Sochi Olympics in both the two- and four-man bobsled, has been a professional arm wrestler (he’s seen in red above training against Russian champion Denis Tsyplenkov), and is currently a member of the Russian parliament in ruling party United Russia) illustrates:

“Come over to my country and try to take (my medals),” Russian bobsledder and federal lawmaker Alexei Voevoda taunted IOC disciplinary panel head Denis Oswald in Russian media on Monday.

That’s quite something. And Voevoda is probably someone you don’t want to try and take medals from, at least in person; he’s won world, European and Russian arm wrestling championships in the past before giving that up to focus on bobsleigh (where he won Olympic silver in the four-man in 2006 and bronze in the two-man in 2010, in addition to his dual golds in 2014). Here’s a seven-minute compilation video of him training (which involves boxing, weightlifting, lifting people and more) and arm wrestling, and feels like Rocky crossed with Over The Top (yes, there was an arm wrestling movie, and yes, it also starred Sylvester Stallone):

While Voyevoda is being perhaps the most forceful with his comments here, his sentiments seem pretty in line with what other key Russian officials are saying:

Investigations into doping haven’t encouraged Russian athletes to speak out about abuses. Instead, there is a public hunt for whistleblowers, or “traitors to the motherland,” as cross-country ski federation president Yelena Valbe calls them.

Meanwhile, Russian President Vladimir Putin has claimed the International Olympic Committee — which will make the final ruling on Russia’s eligibility — is being manipulated by shadowy U.S. interests intent on using doping scandals to disgrace his government ahead of elections in March.

…”It’s impossible to agree with (the report), because the report contains a lot of discrepancies,” Sports Minister Pavel Kolobkov said Monday, adding “it will be hard for us” to convince WADA to reinstate the Russian agency.

Accepting McLaren’s findings would mean abandoning a Kremlin line, stated regularly and vehemently, that Russia has never had any state involvement in doping.

McLaren’s investigation alleged various officials from the Sports Ministry oversaw a doping cover-up, vetoing punishment for “protected” star athletes. Most of the ministry officials named in McLaren’s report quietly resigned or were dismissed last year, but then-Sports Minister Vitaly Mutko was promoted to deputy prime minister and continues to oversee preparations for next year’s soccer World Cup in Russia.

Russian relations with the IOC have soured after it started banning Russian athletes for doping offenses from the Sochi Olympics. Six have been banned so far, including two medalists, and verdicts are expected within days on several more.

So, yeah, this seems likely to be a heated series of meetings. (Or a frosty one, depending on your metaphor preference.) And there’s no clear answer on what will come from it, and what implications there will be for Russian sport if neither side backs down. But the line to take Voevoda’s medals in particular may not be long, especially if any arm wrestling is involved. You’re not going to twist his arm too easily.