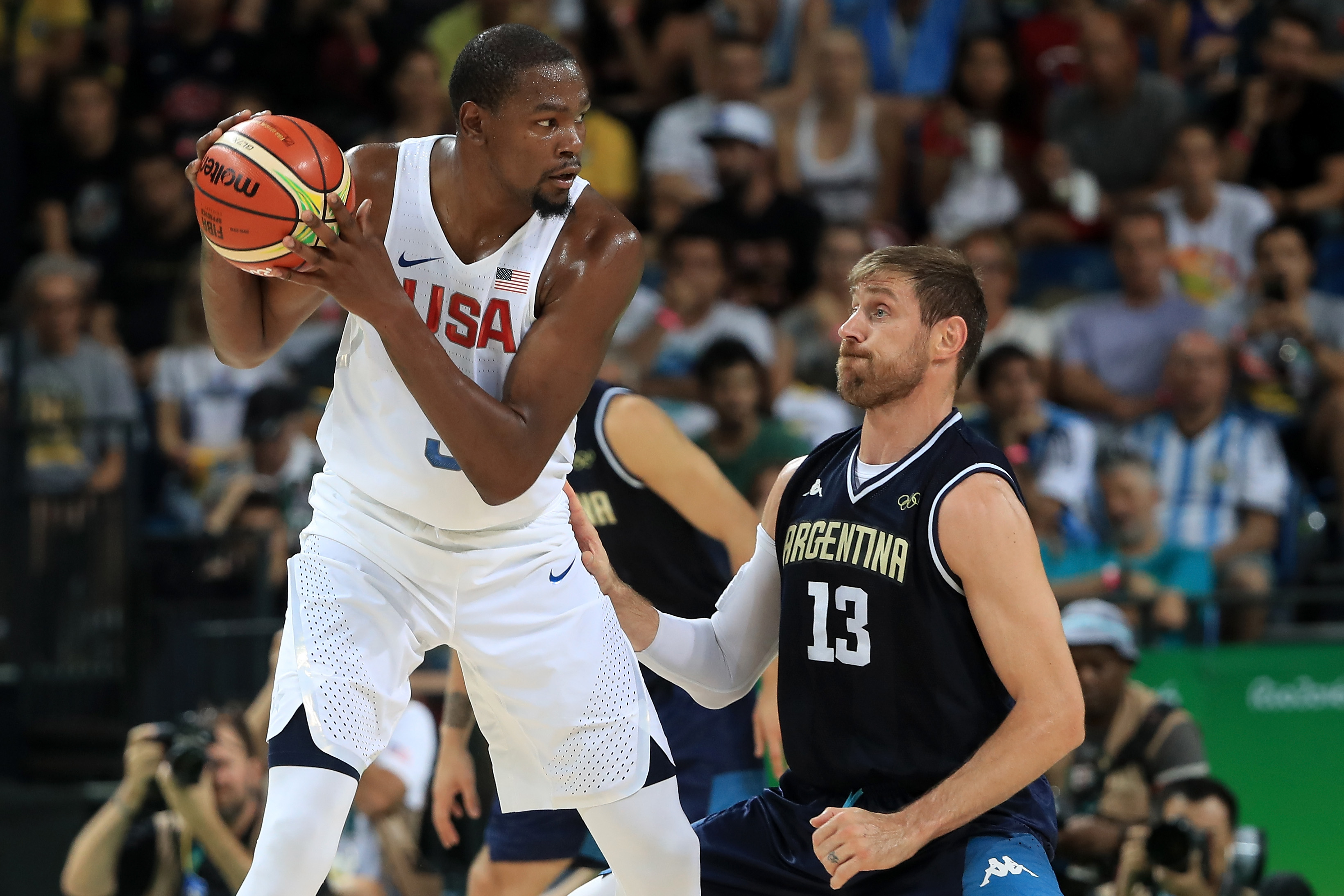 The United States men’s basketball team heard all week how they had played a few games that were closer than they should have been. Having a few days to hear about it, including a day of relaxation led to a nice change of pace, as the team knocked off Argentina 105-78.

At the beginning of the game, it looked like things might have somehow gotten worse for the United States. Argentinian guard Facundo Campazzo got off to a hot start, keeping Kyrie Irving on his toes and often leaving him behind. He was instrumental in giving Argentina an early 19-9 lead, which left the crowd roaring.

But the United States would answer, and in a big way. You could see the anger in the face of Kevin Durant, and he was going to do something about it. He came down the floor, knocked down a shot, and was clearly yelling in anger, trying to pump up his teammates. The United States finished the first quarter on a 16-2 run to finish out the quarter, giving them a 25-21 lead.

The red, white, and blue carried that momentum into the second quarter, giving us our most entertaining stretch of USA basketball in what has seemed like an eternity. Paul George was stellar on both ends of the floor, but his defense was especially spectacular. He was locking down anybody that was in front of him, and even intimidating the opposition into turnovers.

Kevin Durant continued his offensive onslaught with his crafty and deadly nature. It was fun to watch Durant pick apart the defense, and at times decide he wasn’t even going to bother, and pull up for a quick 3-pointer. Durant felt like he was in control, and he showed as much.

Along with Durant’s offensive showcase, Kyrie Irving looked much improved from early on in the game. Thanks to this, the United States took a comfortable 56-40 lead into the half.

Kevin Durant did not let up in the second half. He continued to be aggressive on both ends of the floor. Argentina was trading blows with the United States for the first half of the third quarter, but Durant was just too much. Through three quarters, he had totaled 27 points, leading the way offensively for the United States. It was clear that Argentina was beginning to fatigue after being unable to narrow the gap.

The United States starters were pulled early in the fourth quarter, along with Manu Ginobili for Argentina. Despite the game being clearly out of reach, the Argentinian fans were as loud as they had been all evening. Ginobili re-entered the game with under four minutes remaining and would be pulled from the game with less than two minutes, effectively ending his illustrious international career to a standing ovation and hugs from teammates.

The victory was one that was very much needed for the United States, but they’ll have to be better collectively on both ends of the floor when they face Spain in the semifinals. Often times, the offense was nothing but isolation, which is fine when guys like Durant are hot. But Spain is one of the more talented teams the United States will face in Rio, and if they aren’t sharp, it will be a much more challenging contest come Friday evening.

The rotations for the United States got even tighter Wednesday, but it seemed Mike Krzyzewski had a better grip on groups that were more effective compared to others. Draymond Green and DeMar DeRozan were used sparingly, and we saw none of Harrison Barnes until garbage time.

This might help the cohesion of the United States, and allow guys to get into more of a rhythm as they enter the semifinals Friday.

It appears the two certainties on the team right now are Kevin Durant and Paul George. The two were deadly when on the floor at the same time, and when Kyle Lowry was added to that equation, things went much more smoothly. But the team is too talented to have to truly nitpick who is in the game, because for all we know, Kyrie Irving or Carmelo Anthony could go off at any moment. That’s the one luxury the United States has that no other team possesses.

Yet, somebody has to be on in any given moment. We’ve seen stretches where that isn’t the case. We’ll have a much better idea of that on Friday.