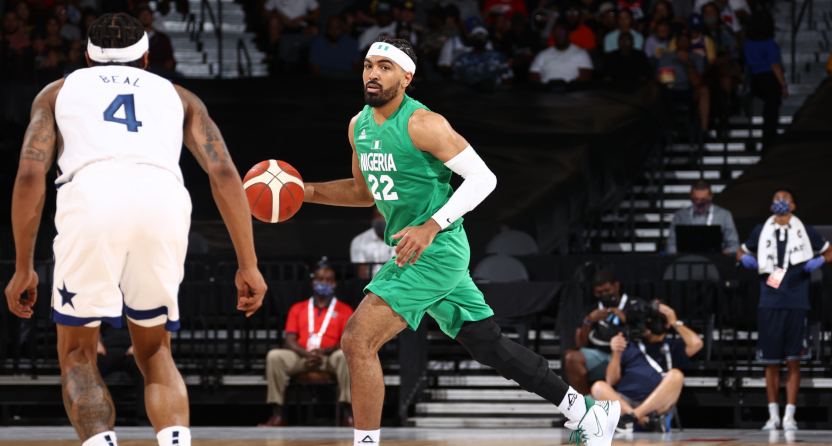 Before the upcoming Tokyo Olympics, the U.S. men’s basketball team’s last major tournament was the 2019 FIBA World Cup, where they suffered two of their 11 major international tournament losses since 1992 and finished seventh, their lowest-ever result in a major international tournament. So there’s been lots of discussion about if they’ll do better this time, and if they’ll be able to defend the gold medals they won in the last three Olympics. And while we’re not yet at the Olympics themselves, the team’s five-game exhibition schedule in Las Vegas ahead of the Games didn’t start the way they wanted Saturday, as they fell 90-87 to Nigeria in the first game on that schedule.

Nigeria defeats #USABMNT 90-87 in exhibition play in preparation for Tokyo.

While the U.S. team doesn’t have some top American players, with LeBron James and Steph Curry both withdrawing from consideration, it does have an impressive lineup. That includes three players with previous Olympic experience in Durant, Draymond Green and Kevin Love. However, it should also be noted that three of the players on that lineup aren’t yet with the team, as they’re still in the NBA Finals; that would be the Phoenix Suns’ Devin Booker and the Milwaukee Bucks’ Khris Middleton and Jrue Holiday. And it should be noted that Nigeria, led by Golden State Warriors’ associate coach (and former Cleveland Cavaliers and Los Angeles Lakers head coach) Mike Brown has quite the NBA roster at this point too, making this a lot different then when the U.S. demolished Nigeria in the Olympics in 2012:

The U.S. men’s basketball team lost to Nigeria in its first pre-Olympic exhibition game, its first-ever defeat to an African nation.

This Nigerian team includes Gabe Vincent, Precious Achiuwa and KZ Okpala of the Miami Heat, Chimezie Metu of the Sacramento Kings, Josh Okogie of the Minnesota Timberwolves and Miye Oni of the Utah Jazz.

With Jahlil Okafor and Jordan Nwora also in the player pool, it could field the largest contingent of NBA players on a single Olympic roster for any non-American nation in history.

Of course, this was just an exhibition, and the first of five, and it came just five days after the U.S. training camp opened. So this isn’t necessarily an indication of how the U.S. will do in the remaining exhibitions or in the Olympics proper. But it certainly showed this Nigerian team as one to watch, and it also suggested that these Olympics may not be all that easy for this U.S. team. Their next exhibition game is set for 8 p.m. Eastern Monday against Australia, and will be broadcast on NBCSN.