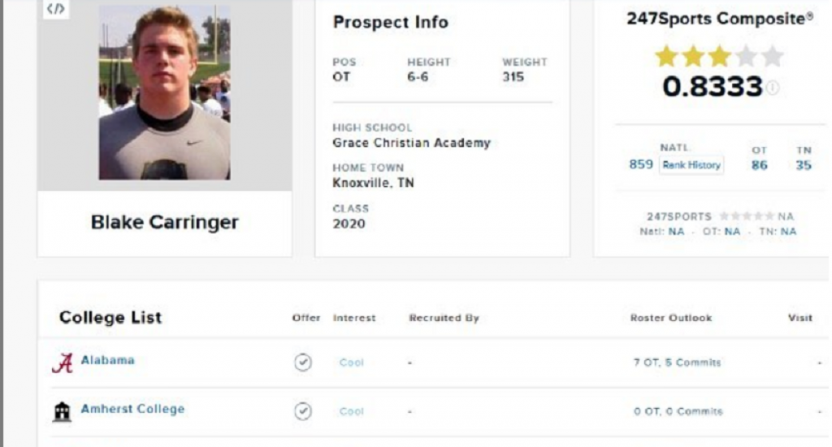 Once upon a time Blake Carringer was a three-star offensive lineman recruit from Tennessee with offers from some of the most accomplished programs in the nation. Except Blake Carringer was different than most of the other big time high school recruiting prospects. Why?

Because he didn’t exist.

Yes, another day another story from the weird and wild realm of college football recruiting.

An Instagram account called Elite College Football claimed that a group of students had brought Carringer out of the same fictional world of Lennay Kekua. Carringer did not play football; he did not receive an offer from Nick Saban at Alabama; he was not a real person.

In spite of that small setback, though, he was still somehow ranked by recruiting services Rivals and 24/7 Sports as a three-star prospect.

You can even see here that another account posted a screenshot of Carringer’s page on the 24/7 site with supposed offers from Alabama and Florida. Carringer initially received a three-star rating from Rivals, which is one of the recruiting services that 24/7 uses for its composite ratings.

CRAZY story of the day: 247 composite and Rivals rank a FAKE RECRUIT. Blake Carrienger is a 6’6, 315lb Offensive Tackle from Grace Christian HS in Knoxville, Tennessee. Blake holds offers from Georgia, Florida and Alabama among others, and has been rated as a 3 star on 247 and Rivals He also doesn’t exist. Some students made a fake twitter account of this player and without posting ANY film, tweeted out that they had offers from Alabama, etc. and without seeing ANY film or evaluating at all, Rivals put him on the site as a 3 star with a 5.5 rating and gave him a full article on his “evaluation” without even seeing him play. 247s composite found it and posted it on their composite but not their top247 rankings. Rivals has not came out and said anything about this.. Basically, the recruiting sites got catfished 💀 What y’all think about this? Personally I think it discredits the sites work because it shows that they base star rating off of an offer list only, so in a way some high school kids just exposed a recruiting site 🤷‍♂️ #CFB #recruiting #Rivals #247

A post shared by College Football Recruiting (@cfbrecruitingszn) on Feb 13, 2019 at 7:48am PST

After the catfishing scheme was made known publicly, 24/7 CEO Shannon Terry publicly called out Rivals for declaring the initial ranking and said that the company would change how they would do their composite rankings. The company will only issue composite rankings for recruits that are also included in 24/7’s own rankings.

Recruiting PSA 1 of 2: Yday a national recruiting service rated a prospect that doesn’t exist. Unfortunately, that service’s public data contributes to the 247 Composite. While appalling, I am not surprised. (continued …)

Continued … Ironically, it was same lil brother service that took shots at 247 on NSD. In order to insure that never occurs again neg impacting the Composite, 247 has a new protocol where prospects are no longer given a Composite rating w/o also having a 247Sports rating.

It wasn’t just these national recruiting services that got hoodwinked, though. SB Nation found other instances of Carringer gaining traction on social media, even having his fake Twitter handle listed by a local paper for their area recruits to watch in Tennessee.The Carringer Twitter account must have been convincing, as it actually used a picture of an Arizona State offensive lineman, Corey Stephens.

To be honest, it’s amazing that this doesn’t happen more often. It seems practically impossible for these national recruiting sites to properly scout, vet, and rank thousands and thousands of prospects from coast to coast. It’s not really a shock that a made-up recruit would slip through the cracks, especially if they looked the part on social media. Some have even gotten further than a recruiting ranking in the past – remember Kevin Hart, who faked a hat ceremony declaring his commitment to Cal even though they had never recruited him?

As short lived as it was, at least Blake Carringer will always be able to have a claim to fame that he was a more highly touted high school recruit than J.J. Watt.