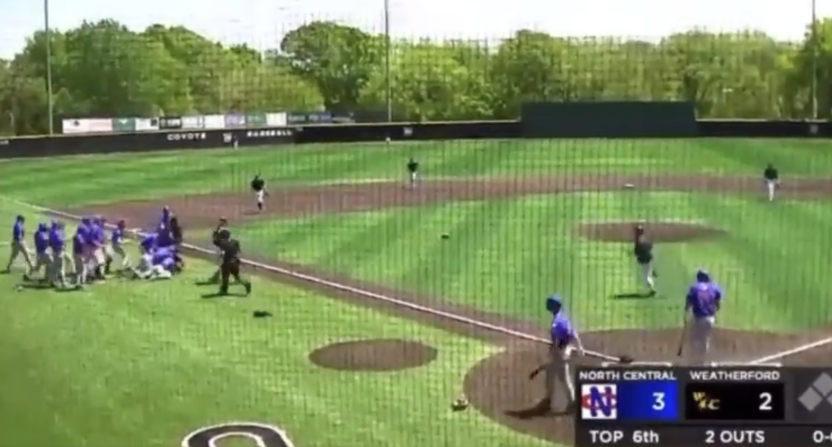 Baseball and football don’t have too much in common unless you’re a pitcher for Weatherford College it seems.

Weatherford was hosting North Central Texas College for a doubleheader on Wednesday as part of North Texas Junior College Athletic Conference play. In the top of the sixth of one game, NCTC’s Josh Phillips cracked a home run that put the Lions up 3-2 on the Coyotes. That apparently didn’t sit very well with Weatherford’s pitcher and, as Phillips rounded third, he tackled the hitter and instigated a bench-clearing scene.

In a game between NCTC & Weatherford,

Only in Texas folks pic.twitter.com/Bb5lpQ4t34

Shoutout to the announcer’s very honest “Oh! Oh my! Oh no!” reaction. That about sums it up perfectly.

It’s unclear what instigated the full-on tackle but many are assuming there was some trash-talking going on at some point. Regardless, it’s a wild outcome on the play given that there was plenty of game left to be played.

Phillips, to his credit, got up from the tackle and left the scrum to go touch home base, ensuring that this home run did count in the record books.

Surely there are more details to come on why this happened and what kind of punishments might be in store for the pitcher, but Twitter certainly had some very strong reactions to the incident.

This is one of the craziest things I've ever seen! https://t.co/Qrf4KbUpKx

This man forgot what sport he was playing pic.twitter.com/vGpqGmrlgT

We expect to hear the Jim Ross-called version of this highlight very soon.