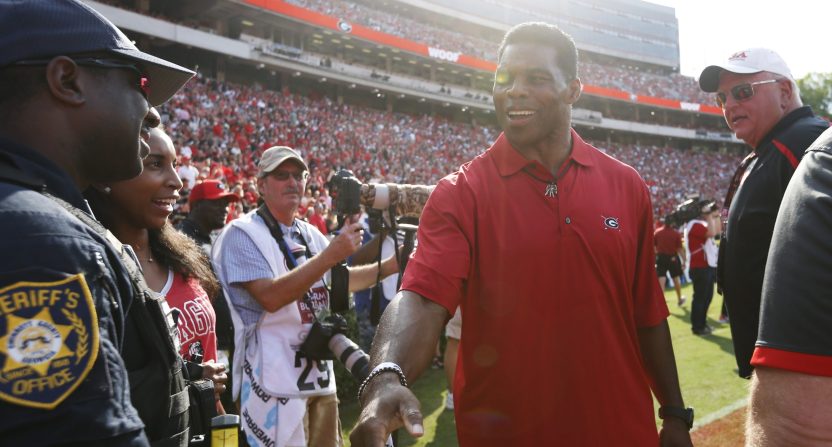 If anyone knows what it’s like to go from being a successful college and professional athlete to a United States Senator, it’s Bill Bradley. Now, the former New Jersey Senator has offered his thoughts on Georgia Republican Senate candidate Hershel Walker.

Bradley was a star basketball player at Princeton who went on to win an Olympic gold medal in 1964 before embarking on an NBA career that netted two championships with the New York Knicks. Bradley was later enshrined in the Naismith Memorial Basketball Hall of Fame. After his playing career was over, Bradley embarked on a political one, eventually serving three terms as a Democratic U.S. senator from New Jersey and running for President in 2000.

Herschel Walker is trying to follow in Bradley’s footsteps as a former star college athlete, though he was a Heisman Trophy-winning running back for the Georgia Bulldogs. Walker went on to play for the Dallas Cowboys and Minnesota Vikings in the NFL as well, and now he too has his eye on the political world.

Walker is in the midst of a run-off election against Georgia Senator Raphael Warnock after a brutal election cycle saw them nearly deadlocked. Walker’s campaign has been mired in controversy and lies throughout and many have questioned if he has the acumen to truly understand what it means to represent the state of Georgia in the U.S. Senate. It sounds like Bradley is among them.

“I’ve seen plenty of people make mistakes,” Bradley told Sports Illustrated. “I haven’t seen anybody make as many mistakes. It seems to me that [Walker] was not prepared to run for office, and certainly not this office. I don’t know what he’s done over the years to try to understand the world or understand his country or understand politics or the economy. … I just hope that there are enough Georgians who recognize that they wouldn’t be getting a full-time senator. And every state needs a full-time senator—two of them—if they’re going to be represented well.”

“You get exposed easily,” Bradley added. “If you don’t know what the hell you’re doing, it’s not long [before] everybody knows: Well, he’s over in this category.”

It doesn’t sound like Bradley thinks Walker could do what’s required to be a good U.S. Senator, and he would know.