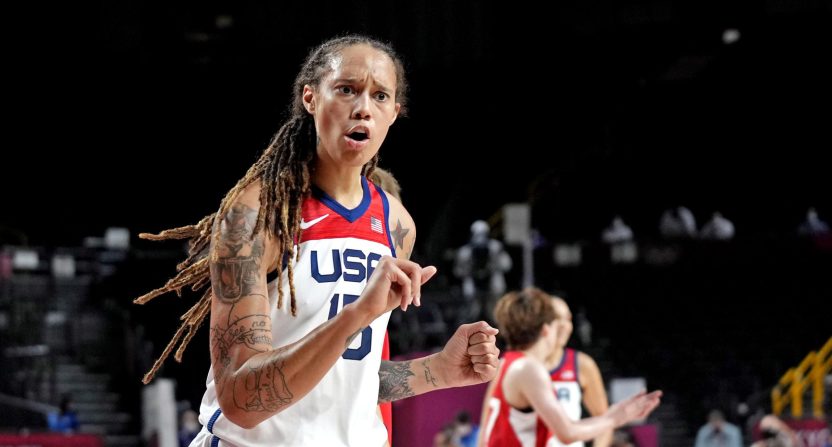 While you might think that most Americans want to see WNBA star Brittney Griner returned home from a Russian prison, sometimes the rhetoric around her situation will leave you wondering why so many in the U.S. seem to lack sympathy for her. According to an expert, there’s a good reason for this.

Griner was arrested in February at a Russian airport when customs agents reportedly found vape cartridges containing hashish oil in her luggage. After spending months awaiting trial, she was eventually found guilty on drug charges and sentenced to nine years in a Russian prison. However, many experts have long said that the entire episode is political theater meant to force the United States into negotiating a prisoner swap in order to get Griner home, which is exactly what appears to be happening.

While there are many who have been supportive of the basketball superstar and openly called for the U.S. government to help her, there have also been a lot of Americans expressing a lack of sympathy for her, to the point where they’ve even said that she deserves the punishment she’s received and the U.S. shouldn’t do anything about it.

It’s a confusing stance given what we know about the reality of the situation. However, Dani Gilbert, an expert on hostage-taking and recovery and a Rosenwald Fellow in US Foreign Policy and International Security at Dartmouth College’s John Sloan Dickey Center for International Understanding, recently explained to Insider that there’s a logical explanation for why so many Americans seem to be rooting against Griner.

Gilbert describes this as an example of the “deservingness heuristic,” in which people make value judgments on others based on whether or not they feel they “deserve” assistance.

“The fact that the American public might be really focused on the alleged drug possession and the outlandish accusation of drug smuggling might make them less willing to pay attention to this case,” Gilbert told Business Insider. “That’s the kind of dynamic that might really be in play. It’s unfortunately quite predictable that Americans respond this way.”

Former President Donald Trump, for instance, said that Griner was “loaded up with drugs,” which is factually incorrect. But the inference helps to make it easier for him and others to discount how deserving she is of aid.

Gilbert also says that certain characteristics could be impacting the way the public sees Griner, noting that while “gender tends to be less influential in how the American public and how the media care about, sympathize with, pay attention to Americans who are held hostage abroad” than some other factors, “race is a huge deal here.”

“A white girl or a white woman who is taken captive or arrested or something like that elicits tons of sympathy from the American public in a way that women and girls of color do not,” she explained. The fact that Griner is Black “could be a huge part of the lack of attention to her case.”

Gilbert also notes that the fact that Griner is openly gay and that she previously protested the national anthem also plays into how much she “deserves” help in the minds of some Americans.