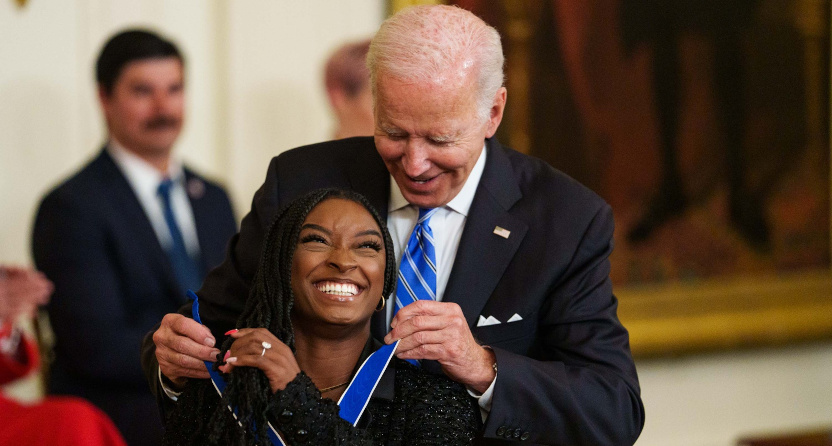 The last several years have seen many U.S. athletes speaking out on social and political issues, and that’s unsurprisingly led to both support for them and criticism for them from political figures. It’s not shocking that U.S. women’s national soccer team/NWSL star Megan Rapinoe, for example, isn’t exactly beloved by those associated with former U.S. president Donald Trump, considering her long history of public back–and–forths with him. But, with Rapinoe and decorated Olympic gymnast Simone Biles at the White House Thursday as two of this year’s 17 recipients of the Presidential Medal of Freedom from current U.S. president Joe Biden (an appearance Rapinoe used to honor fellow U.S. Olympian Brittney Griner, currently on trial in Russia), that sparked a rather unusual criticism from former Trump legal advisor turned Newsmax correspondent Jenna Ellis Thursday night:

In the Olympics alone, Biles (seen at top receiving this medal) has accumulated four gold (one team, three individual), one silver (team), and two bronze (individual) medals over the years, with those four golds and one bronze coming in London in 2016 and the silver and the other bronze coming in Tokyo last year. At the world championships, she’s won 19 gold, three silver, and three bronze medals, with her combined Olympic and world championship medals making her the most decorated gymnast in American history. The 24-year-old Biles is the youngest-ever recipient of the Presidential Medal of Freedom.

Meanwhile, Rapinoe was part of the gold medal-winning U.S. team in 2012 and the team that won bronze in last year’s Olympics. Rapinoe was also on the U.S. teams that won the FIFA Women’s World Cup twice (in 2015 and 2019, with that latter tournament seeing her win the Golden Boot as top scorer and the Golden Ball as tournament MVP) and finished as runners-up in 2011. She also won the Ballon D’Or (women’s player of the year) award in 2019.

Of course, Biles and Rapinoe did not finish on top of the Olympic podium last year. Biles withdrew from several events, citing mental health and “the twisties” (a phenomenon that sees gymnasts lose air awareness and control, and can lead to significant injuries), so she left Tokyo with a team silver and an individual bronze in balance beam. Rapinoe and the women’s soccer team fell 1-0 to eventual gold medalists Canada in the semifinals, and went on to win bronze over Australia. So neither of these athletes was completely victorious in their most recent world-level competition. But describing them as “losers” still drew Ellis a lot of criticism. Here’s some of that:

Looked up “loser” in the dictionary and it was defined as a “Jenna Ellis.” Going 0-for-63 in your attempts to overturn the election wins you a special “Loser” tag.

Simone Biles won 19 World Championship Golds, 4 Olympic Golds and is the most decorated gymnast in US history. Megan Rapinoe won 2 World Cups, an Olympic Gold and was named Best Player in the World in 2019.

You lost 63 lawsuits and got farted on by Rudy Giuliani.

Seriously, Jenna Ellis is the last person on earth who should be calling anyone a loser. Much less Olympic champions. https://t.co/AqNZIYX903

who is Jenna Ellis? Asking for everyone https://t.co/nFhGIUJf9D

And Ellis responded to that: