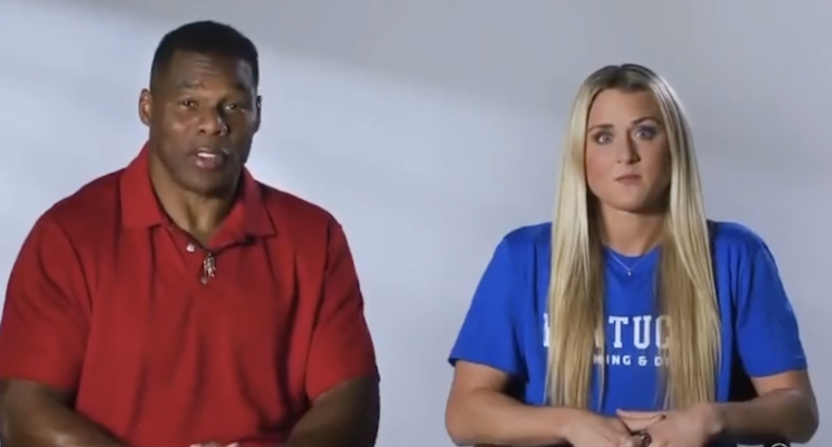 Georgia Republican Senate candidate Herschel Walker is facing Democratic incumbent Senator Raphael Warnock in the nation’s most intense election of the 2022 midterm cycle. After both sides spent $241 million on the race, neither candidate reached the 50 percent mark required to seal the election, which means they’re now heading towards a run-off election on December 6.

The campaign turned nasty in the hours before the initial election ended and Warnock has accused Walker of crossing a line with his attack ads since. Warnock has responded by drawing a direct line between Walker and Donald Trump, who appears to be an albatross around Republican candidates’ necks this election cycle. Walker appears to be trying to distance himself from Trump while also saying the kinds of strange things that tie the two together.

Walker’s ad attacks aren’t just about Warnock. He’s also going after transgender swimmer Lia Thomas and featuring a swimmer who competed against her in a new ad.

Herschel Walker is up with a new runoff ad about transgender athletes, featuring a swimmer who tied with Lia Thomas.

“My senior year, I was forced to compete against a biological male,” Riley Gaines says in the ad for Walker’s Senate campaign. pic.twitter.com/MlVxnJwkgB

Riley Gaines, a former Kentucky swimmer who has appeared on stage with Donald Trump in an effort to oppose allowing transgender athletes to compete in women’s sports, is in the ad with Walker.

“For more than a decade, I worked so hard. 4:00 am practices to be the best,” says Gaines in the ad. “But my senior year, I was forced to compete against a biological male.”

Walker, who has made it clear that if elected he would vote against a woman’s right to choose what to do with her body, called this “unfair and wrong.”

The ad and its message, which wants to create laws that limit the abilities of transgender athletes, comes just days after a gunman opened fire and killed five people at a gay nightclub in Colorado Springs.