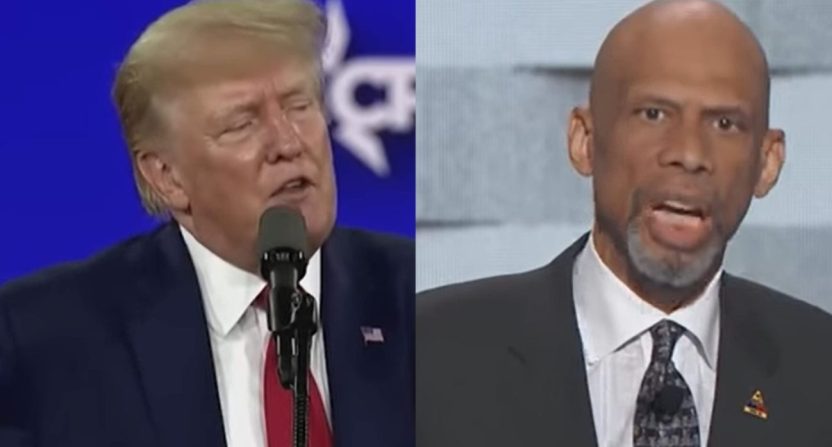 Kareem Abdul-Jabbar is calling out “alleged serial fondler and insurrectionist” Donald Trump for his ignorant take on the detention of WNBA star Brittney Griner in Russia.

Griner was recently sentenced by Russian court to nine years in prison after she was detained in a Moscow airport for allegedly traveling with vape cartridges containing hashish oil in February. The United States is currently working to bring Griner home with a prisoner swap in return for Viktor Bout, a Russian arms dealer known as the “Merchant of Death.” Bout is serving a 25-year sentence after he was convicted of conspiring to kill Americans by selling military weapons.

Earlier this month, Trump joined The Clay Travis and Buck Sexton Show from the LIV Golf event at his Bedminster course and during the interview, the former president made it clear that he wasn’t a supporter of attempting to bring Griner home, accusing her of being a “spoiled person” who entered Russia “loaded up with drugs.”

Trump’s opinion drew the ire of many, including Kareem Abdul-Jabbar who blasted the former president and his base of GOP followers for choosing to side with Russia in the Griner verdict. The basketball Hall-of-Famer and social activist addressed Trump’s comments in a post on his Substack.

“What irks me (yes, I used the word irk) is the Republican backlash. Donald Trump—alleged serial fondler and insurrectionist—called her “a potentially spoiled person” who went to Russia “loaded up with drugs.” I’m still trying to understand “potentially”—either she is or isn’t. Also, she wasn’t “loaded up with drugs” but had a few vials of hasheesh oil for vaping. Her lawyers also provided evidence from her doctor that the cannabis was for medical use due to chronic pain.

“I’m not sure when siding with Russia against U.S. citizens given unfair trials and outrageous sentences became a thing. Why don’t they have anything to say about Whelan (or why didn’t Trump get him released when he was president)? Maybe because Griner is Black and bisexual and therefore not important to the Republican Party.”

While many Republicans have rallied around Trump’s decision to side with Russia in the Griner case, it represents a waffling from their initial thoughts on the situation, which saw GOP reps such as Jim Jordan suggest the WNBA star would have already been released from Russian prison if Trump was still in office. But according to Abdul-Jabbar, Griner doesn’t fit the typical demographic of someone who Trump or the Republican party would seek to defend and support.