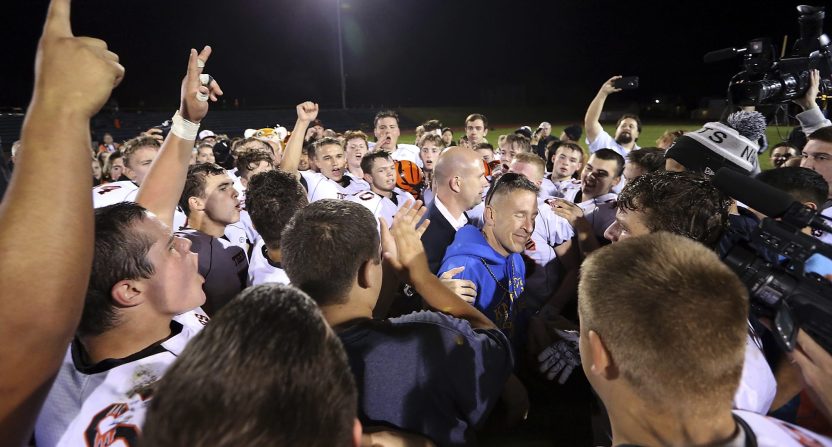 On Monday, the U.S. Supreme Court announced a 6-3 decision that sided with a Washington State high school coach who wanted the right to kneel and pray on the field after games.

Joseph Kennedy, an assistant coach for Bremerton High School’s varsity football team and head coach of the junior varsity team, would kneel on the field after games and pray for a decade, eventually joined by some of the players. Out of concern for legal action, Bremerton, WA public school officials asked him to stop praying on the field. Kennedy refused to do so and he was placed on leave before his contract was not renewed in 2015.

Kennedy sued, and, thanks to the support of many conservative activists, his case eventually made its way to the Supreme Court.

Ultimately, the court’s majority ruled that the coach’s prayer was protected by the First Amendment.

“The Constitution and the best of our traditions counsel mutual respect and tolerance, not censorship and suppression, for religious and nonreligious views alike,” wrote Justice Neil Gorsuch for the majority.

“It elevates one individual’s interest in personal religious exercise, in the exact time and place of that individual’s choosing, over society’s interest in protecting the separation between church and state, eroding the protections for religious liberty for all,” wrote Justice Sonia Sotomayor for the minority.

Many around the country wondered if the conservative court would have ruled the same way if Kennedy were Muslim or Jewish, while others wondered if the same judges would approve of Colin Kaepernick’s national anthem kneeling protest at sporting events if it came before them. The sports world certainly had a lot of strong reactions to the decision. Given how many prayers, specifically Christian prayer, can be a part of American sporting events, there are a lot of opinions out there.

Thank you for your leadership Coach Kennedy and making prayer available to your Student Athletes! We are so blessed in this country to have these freedoms! Grateful! @AuburnTigers https://t.co/OcdpqHtp5i

Jemel Hill pondered what would happen if the coach had been Muslim and if the same people cheering today would still approve of the decision.

The issue wasn’t about him praying, but that he was pressuring other students to join him. Please let a Muslim coach try this and see what happens. https://t.co/JyaRjQYIYa

Others in the sports media and sports world chimed in as well.

American Christians are so used to their faith being the default that they cannot possibly fathom there being consequences for not participating in these situations. The rest of us have long histories that show otherwise & even then it's often not enough. https://t.co/5kSYrNwlGt

This isn’t about prayer, it’s about whether or not a football coach has power and influence over his players.

This ruling basically says he doesn’t, which we all know, is inaccurate. https://t.co/Kay6aMuneo