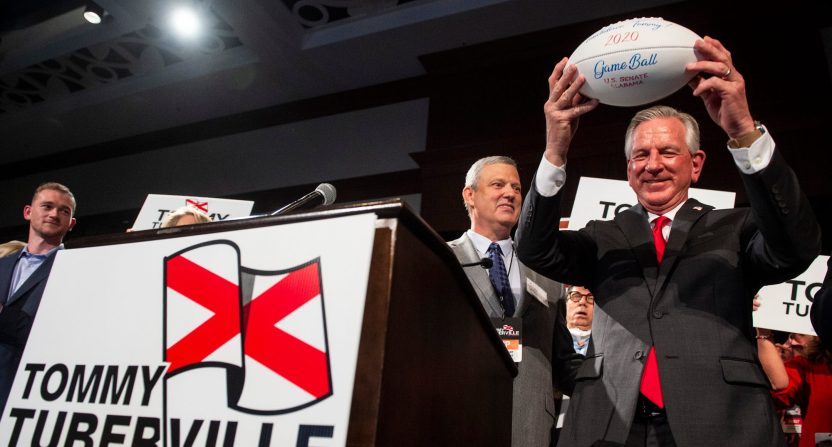 Tommy Tuberville rose to prominence as a college football coach, where his success was made due to the efforts put forth by teams consisting predominantly of Black student-athletes. Now that he’s a U.S. Senator, the former Auburn coach seems to be admitting he doesn’t think very much of Black people.

Tuberville asserted Saturday that Democrats support reparations for the descendants of slaves because “they think the people that do the crime are owed that.”

Naturally, the Republican politician made those comments at a rally featuring former President Donald Trump (of course). Tuberville’s comments were part of a larger criticism of Democrats leading up to the November 8 election where supposed rising crime rates have become a talking point for their party. However, Tuberville went out of his way to tie those rising crime rates directly to Black people, a classic stereotype employed often by Republicans to stoke fear.

In reality, crime has gone down overall in the last year and most crimes are committed by whites, per the FBI. Also, in spite of Tuberville’s comments, the Democratic Party has no official stance on reparations for Black Americans.

Naturally, these dog whistle comments have created quite a stir around the country, especially in the sports world where Tuberville initially rose to fame.

A reminder that Tommy Tuberville was a collegiate coach for nearly 30 years, during which he coached scores of Black players. He made millions off their abilities, but here’s what he really thinks about Black folks. https://t.co/aFjqocLTNH

Tommy Tuberville is just a regular white nationalist now. It's sad. Perhaps he's not the most racist big coach of recent times. (Lou Holtz did an ad for Jesse Helms.) It's so sad to wonder how many of today's players are playing now for dudes just like those two. It ain't none.

It completely tracks that someone who made $26 million leading an under-compensated, mostly black, workforce holds these opinions. https://t.co/G7vX2EB3aK

The job is quite literally to facilitate the transfer of value from a largely Black workforce to an almost entirely white fleet of administrators, so, yeah, it ain't none. https://t.co/5cKI3kUT22

Because, of course, all Black people are criminals.

And this guy was a football coach at Auburn — with Black players.

The Republican Party is the official party of white supremacy in America. https://t.co/WxNwRQfBTQ