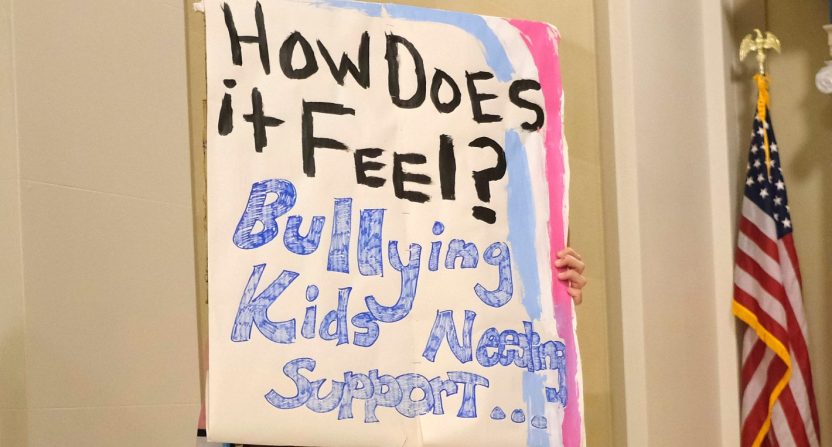 This week, a Virginia lawmaker introduced a bill to the state legislature that would effectively ban transgender student-athletes from competing against the gender with which they identify.

The bill – officially named H.B. 1387 – was proposed by Virginia State Delegate Karen Greenhalgh of the state’s 85th district. The proposed legislation would require teams to be categorized based on biological sex: male, female, or co-ed teams, according to the Washington Post.

The bill applies to all levels of competition throughout the state, “interscholastic, intercollegiate, intramural, or club athletic” and extends from K-through-12 grades all the way to public colleges and universities. The bill even attempts to coerce private institutions into following the guidelines, prohibiting private schools from competing against public schools unless they comply with the transgender ban.

The bill has already caused quite a stir with an LGBTQ group called the Pride Liberation Project blasting the bill for “attacking” an already depressed population with.

“Already, our schools are experiencing a mental health crisis,” members of the Pride Liberation Project wrote to the Washington Post. “Rather than introducing policy solutions that build safe and affirming schools though, our lawmakers are focused on attacking a student population that experiences extraordinarily high rates of depression and suicide.”

The world had plenty to say about the controversial bill.

🚨BAD BILL ALERT🚨A bill to ban trans student athletes from participating on the sports team that affirms their gender identity was introduced.

Trans kids deserve to play sports like every other kid, & to do so safely & comfortably. We'll do everything we can to stop this bill. https://t.co/DhshiOBAD8

The anti-trans panic continues to escalate in Virginia. This legislation is a threat to trans people as well as anyone who supports them. https://t.co/sbg7PxLZk3

We will defeat those bills. They will not make it to the Governor’s desk.

But their mere existence is hurting our constituents more than they know or care.

I expect Virginia's anti-trans bill to not go through……….unless the White Man's party wins control of the state Senate and keep their majority in the state House in next November's elections. https://t.co/rFySxXHigA