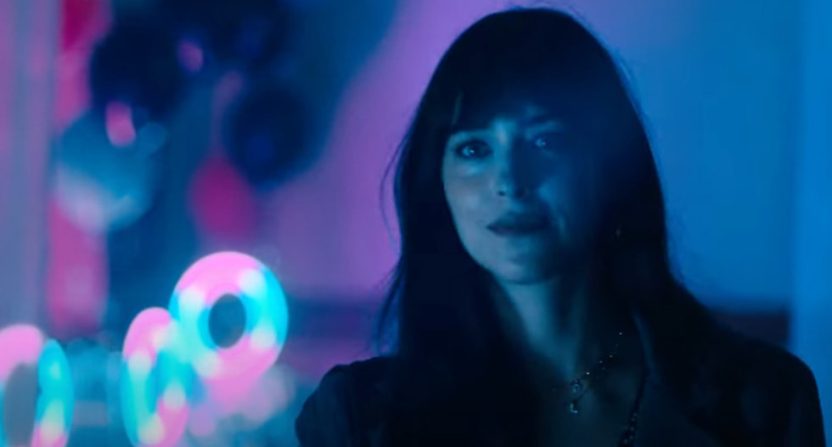 We’re halfway through 2022. After watching 150 movies, here are the best so far:

Quote: “The biggest risk is not taking any risk at all.”

The guys behind “Dick in a Box” made a Disney film. Kind of amazing this happened. We’re glad it did. Director Akiva Schaffer and his Lonely Island teammate Andy Samberg crafted a fun family flick.

Chip ‘n’ Dale: Rescue Rangers is based on the cartoon series of the same name that ran from 1989 to 1990. The Lonely Island trio’s version is an imaginative blend of animation and live-action with plenty of inside jokes. Think of it as Who Framed Roger Rabbit 2.0. There’s even a Roger Rabbit cameo. At its core, this is a warm story about two former showbiz friends —Chip (John Mulaney) and Dale (Samberg)—reuniting after a falling out.

9. Good Luck to You, Leo Grande

This sex-positive drama starring Emma Thompson is charming. The 63-year-old is fearless in delivering a vulnerable performance. Thompson, who suffered body dysmorphia in her youth, gets fully naked in front of the camera for the first time in her career. She plays retired and widowed teacher Nancy, who hires sex worker Leo (Daryl McCormack). She has little experience with other men and has never had an orgasm. All the scenes take place inside a hotel with no exterior shots. The minimalism serves the movie well so we can concentrate on the intimacy. Good Luck to You, Leo Grande maturely addresses shame, guilt, and stigmas.

Available for rent on: Amazon

Here’s a fresh spin on supernatural folklore. You Won’t Be Alone could have played it safe with a story about how witches live among us. Instead, we get something grittier, scarier, and sadder.

There’s plenty of horror and violence, but the key themes center around acceptance and loneliness. Maria (Anamaria Marinca) and her protégé Nevena (played by various actors including Noomi Rapace) wander 19th century Macedonia as outcasts who pretend to be human. It’s a ruse that has its limits. Nevena experiences adventures and assumes several identities in pursuit of trying to fit into a world that fears her kind. You Won’t Be Alone is profoundly moving with a tragic ending.

7. Trust No One: The Hunt for the Crypto King

Quote: “Who can you really believe?”

This engrossing documentary has a little bit of everything: a mysterious death, fraud, conspiracy theories, and missing millions. Did a 24-year-old tech entrepreneur fake his own death so that he could run off with other people’s money?

Trust No One examines the often shadowy world of cryptocurrency. You don’t need to know anything about bitcoin to follow this engaging story. Trust No One is the best kind of true-crime doc, because it walks you through the details, explaining them in a way that’s easy to understand. That’s great journalism. Trust No One separates fact from fiction and reminds us how easy it is to hide your true identity and intentions online.

6. The Unbearable Weight of Massive Talent

Available for rent on: Amazon

Quote: “Whether you like it or not, you have a gift. And that gift brings light and joy to an increasingly dark and broken world.”

Making fun of yourself can be the hardest thing, especially for an accomplished actor. Kudos to Nicolas Cage for agreeing to do this role which he turned down “three or four times.” He only accepted after writer-director Tom Gormican persuaded Cage with a letter.

Here, Cage stars as “Nick Cage,” an exaggerated version of himself. In this alternate reality, a desperate Cage agrees to attend a rich man’s party for an appearance fee of $1 million. Javi Gutierrez (Pedro Pascal) isn’t just a wealthy fanboy. He’s written a movie for Cage. This action-comedy wonderfully teeters between reality and fantasy, leaving the audience wondering what’s real and what’s an act.

Available: Only in theatres for now (it will arrive on Paramount Plus at some point)

What makes it work is a solid story with likable characters and enough callbacks to the original Top Gun without feeling like a regurgitation. Bravo to Cruise for insisting on the use of practical effects. There’s an element of realism that CGI simply cannot match. Also, it was great to see the return of Val Kilmer, whose acting career had been on hiatus due to losing his voice because of throat cancer.

Quote: “Those men may be customers, but they are not gentlemen.”

It’s a well-worn cliché that members of organized crime like to dress nicely. However, The Outfit is probably the first mob movie that tells a crime story from the tailor’s point of view. My apologies. Leonard Burling (Mark Rylance) doesn’t like to be called a tailor. He prefers the term “cutter” which is the name of the person who takes measurements, cuts the cloth, and sews together the pieces of a suit. It’s a fascinating distinction that most people aren’t aware of. Leonard runs a shop in 1950s Chicago that caters to a criminal clientele. When something terrible happens at his store, Leonard finds himself in a very dangerous situation.

Quote: “Even her imperfections are perfect.”

There have been several movie adaptations of Edmond Rostand’s 1897 play Cyrano de Bergerac. This most recent Cyrano was originally released in 2021 but didn’t make it to America until February. Previous versions of the tale stayed true to the original story of a talented and charming man who’s insecure about his extremely large nose. So much so that it prevents him from seeking out his true love Roxanne. This version is a musical that casts Peter Dinklage in the lead role. Instead of Cyrano being self-conscious about his nose, it’s his height. The chemistry between Dinklage and Haley Bennett — who plays Roxanne — is electric. Both actors energetically throw themselves into their roles.

Quote: “Try to relax. Fear and stress isn’t good for the meat.”

If you enjoyed Get Out, Fresh follows a similar playbook, using horror to tell a larger story about misogyny and the perils of modern dating. The movie opens with Noa (Daisy Edgar-Jones) on another bad date with another lousy guy. Her romantic prayers are seemingly answered when she meets handsome Steve (Sebastian Stan) in the supermarket. They begin dating and everything seems too good to be true, because, of course, it is. The plot twist takes a dark turn that some viewers might find hard to swallow (pun intended).

Fresh is an incredible debut from Mimi Cave. She nails it with a perfect ending: a text message that will make you laugh.

Quote: “Giving your heart to somebody is the scariest, most dangerous, most perplexing thing.”

The years after college can be challenging if you haven’t started a career. Andrew (Cooper Raiff) is an aimless 22-year-old, living with his parents and working a McJob in New Jersey. Suddenly, he finds joy as a professional party starter on the bar and bat mitzvah circuit. He meets Domino (Dakota Johnson), an older single mother with a teen daughter, Lola (a terrific Vanessa Burghardt, who is autistic in real life). Andrew forms a connection to both, but it’s complicated. Domino is engaged.

Written and directed by Raiff, this is a winning dramedy about people who are at different stages in life and are still struggling to figure it all out.