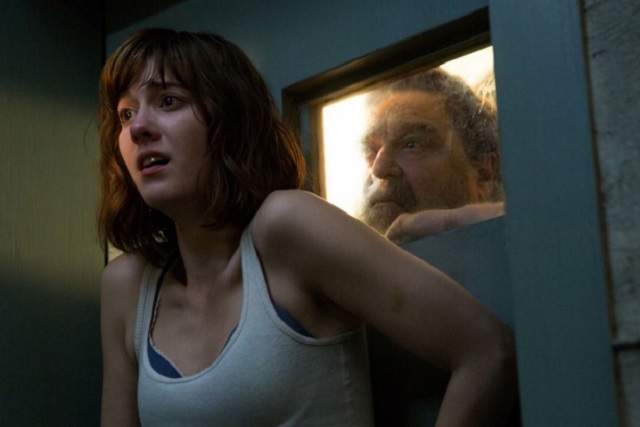 Take issue if you must with J.J. Abrams’ desire to keep the stories of his movies (whether he directs or produces them) in a precious “mystery box.” In some instances, he’s tried too hard to be secretive with plot and character details, and it’s occasionally backfired on him.

But with 10 Cloverfield Lane, that approach works and serves the viewer well. Going into the movie, we don’t know much about the story, other than the cast and setting. Until two months ago, most of us didn’t even know this movie existed. Yet the word “Cloverfield” in the title was seemingly a hint. Naturally, that’s led to plenty of guessing and speculation. We live in a culture where studios give us plenty of information — probably too much of it — before we even get to the theater.

(Ideally, I think it would have been cool not to see what Spider-Man looked like in Captain America: Civil War until actually watching the movie. What a great surprise that would be. But that’s not the world we live in, especially navigating through social media and blogs that love to reveal spoilers.)

Though it feels somewhat condescending for Abrams and crew to act as if they’re protecting story details for our own good — like we won’t enjoy these films unless we consume them exactly the way he and his filmmakers prefer— there is something to be said for maintaining a level of surprise. The story is trying to build to something, and the payoff won’t be the same if we know, or even have an idea of what’s to come. That anticipation, that need for some answers, is what fuels 10 Cloverfield Lane. It’s difficult to imagine watching this film any other way.

As it turns out, that first trailer establishes the premise of the story quite well. Three people are locked up in a bunker, one of whom is there against her will and without knowledge of why they have to be kept from the rest of the world. She’s waiting for an opportunity to spring loose and see what the hell is going on outside the bomb shelter, largely because the man keeping them all down there doesn’t seem trustworthy and may be more than a little crazy. Normal people don’t build protective hideaways from the apocalypse, right?

If you didn’t see the trailer before watching 10 Cloverfield Lane, you might think it’s a sequel to the Saw series or that genre of horror film. The film begins with Michelle (Mary Elizabeth Winnstead), an aspiring fashion designer who is apparently breaking up with her boyfriend and has decided to get some space. Maybe she’s driving home. Maybe she just needs to clear her head and figure things out.

Unfortunately, Michelle ends up in a car accident as she’s looking down at her phone, debating whether to talk to her boyfriend (whose voice is provided by a rather famous actor, but that’s more of an amusing detail than an important one). She wakes up on a mattress in a small, cinder block room with an IV hooked up to her arm and her leg in a knee brace, handcuffed to a rail. Her cell phone isn’t getting a signal. It’s essentially the nightmare scenario for a woman. (Well, it would surely be a nightmare for anyone.) Earlier in the movie, Michelle has already shown that it’s natural for a woman to be mistrustful of strangers, and here are those fears confirmed in the worst way possible.

Her captor and supposed rescuer is Howard (John Goodman), a hulking grump of a man who has seemingly extended the kindness of saving her from that auto accident and nursing her back to health. But why has he locked her in a room, and why has he handcuffed to the wall so she can’t try to escape? 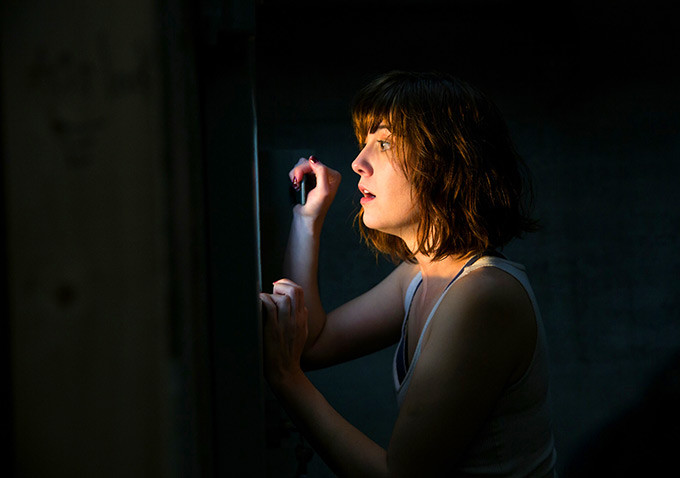 That’s when Howard drops the bombshell. He brought Michelle there for her own good. There’s been an attack outside. There was an explosion and the air is unsafe because of it. Everyone she knows — hell, everyone else entirely — is dead. They have to be. No one could have survived whatever happened out there. The only safe place for them is this shelter that Howard built years ago, in case of just such an emergency.

Who would possibly believe such a story? It certainly doesn’t help that Howard seems ill-tempered and menacing, surely with evil intentions in mind. Has he kidnapped Michelle, feeding her this outrageous tale of nuclear apocalypse and hostile takeover by a foreign country or extraterrestrial threat to somehow make her more amenable to her less-than-ideal circumstances?

Yet what if Howard is telling the truth? The third person locked away with them, Emmitt (John Gallagher Jr.), seemingly corroborates Howard’s story, telling Michelle that there was an attack and he fought to get in the shelter once that first explosion occurred. Emmitt was hired by Howard to help build the bunker and immediately went there when those paranoid fantasies apparently became reality. But is Emmitt just a bit too believing, perhaps even gullible? He can’t confirm that the air outside is toxic; he’s going by what Howard says.

But the script by Josh Campbell, Matthew Stuecken and Damien Chazelle (Whiplash) doesn’t make the story so simple. What if the world really was under attack and humanity was wiped out, but the person you end up trapped with for safety turns out to be a lunatic?

Disastrous events may have affirmed Howard’s warped worldview and created a circumstance he ultimately envisioned for himself, but potential mass destruction and death doesn’t justify his behavior as a person. He gives Michelle (and Emmitt) every reason to mistrust him. He’s paranoid, controlling and has an explosive temper. And is he really telling the truth about his family, particularly the daughter he frequently mentions? Calamity and tragedy likely didn’t make Howard this way, but rather exacerbated his worst traits. 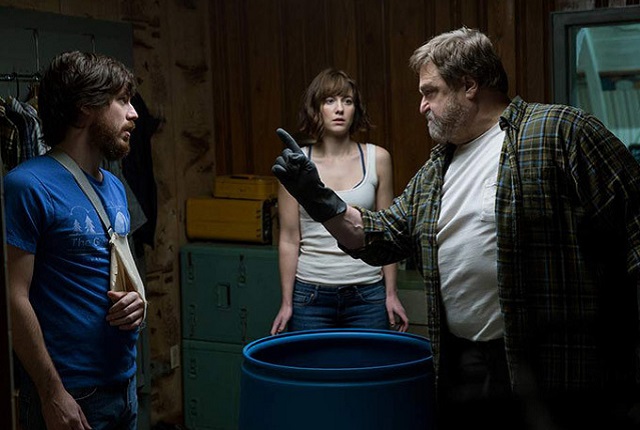 Of course, the big question with 10 Cloverfield Lane is whether or not it’s truly a sequel to 2008’s Cloverfield. Is there a connection between the two films or is “Cloverfield” being used as sort of a brand name for an anthology of sci-fi/horror films produced by Abrams? That will depend on how you interpret the last act of the film and its ending. Personally, I thought it felt like a different movie, veering wildly from an intimate, almost claustrophobic three-person play to something that becomes just a bit too outlandish.

But it’s safe to say that 10 Cloverfield Lane is a far better film than Cloverfield, relying on excellent acting from a strong (but small) cast, a tight narrative and clever storytelling, rather than the gimmick of found-footage and a first-person view.

The small scope of the story seems to suit director Dan Trachtenberg ideally. Trachtenberg is most known for his short film Portal: No Escape (which is embedded below), based on the Portal video game, and both the setting and payoff in 10 Cloverfield Lane are remarkably similar. It’s almost as if he expanded his short film into a feature-length movie, which is a nice, nearly perfect match of material and filmmaker. This project began as a script titled The Cellar, before Abrams snapped it up and thought it would make for a nice continuation of whatever the “Cloverfield” brand is supposed to be.

I would love to see what The Cellar was before it became 10 Cloverfield Lane, and how that story ended. But that’s obviously a moot point. (I’m also eager to see what Trachtenberg does next.) If Abrams continues to drop these sorts of films on us as a surprise, and these stories get better with each installment, all of the secrecy and deceit surrounding these projects is worth tolerating. It’s a nice feeling to not know what’s coming, to watch something unexpected play out. It’s even better when all of that effort results in a good movie.