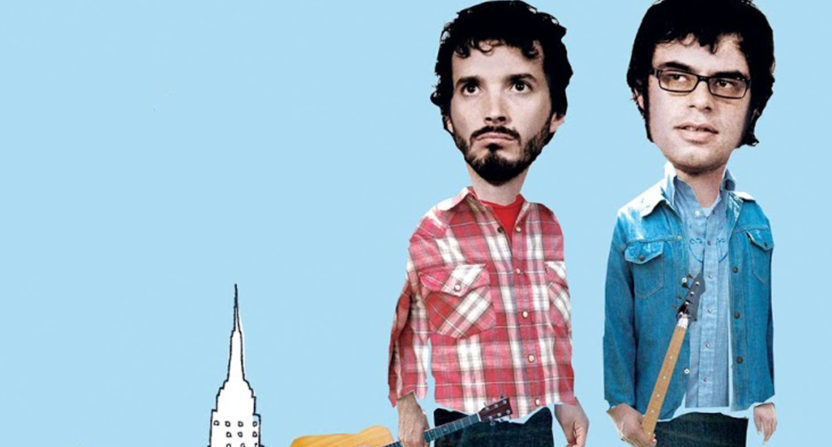 This will make you feel old. This month marks the 10th anniversary of the debut of Flight of the Conchords. HBO’s wonderfully weird comedy about a New Zealand music duo trying to make it in New York City debuted on June 18, 2007. The series lasted only two seasons but its 22-episode run was so memorable because there had never been anything quite like it.

Flight of the Conchords is arguably the second-best made-for-HBO comedy ever made. (The Larry Sanders Show is the undisputed heavyweight king.) You could make a good case for Curb Your Enthusiasm, and Veep has been gaining momentum in recent years. But neither Curb nor Veep were as consistently amusing as FOTC.

The guys who liked to rock the party left the party early. FOTC ended at the apex of its popularity. For years, audiences have clamored for another season. So far, there has only been confirmation that co-stars and co-creators Jemaine Clement and Bret McKenzie are working on a movie script based on the show.

What made FOTC special was that it was irreverent, interspersing music videos with funny observations on culture and dating. It channeled elements of The Secret Life of Walter Mitty with Bret and Jemaine often fantasizing about being more successful with the ladies and in the music biz than they actually were.

In some ways, it set the table for the success that Master of None now enjoys (Aziz Ansari appeared on FOTC). The ground-breaking show adroitly surrounded itself with quirky supporting characters.

** Murray (Rhys Darby) was the duo’s incompetent band manager. He was very orderly when it came to meetings, insisting on roll call. (“Okay, band meeting. Murray, present. Bret, present. Jemaine, present.”) But when it came to getting FOTC gigs, he struggled. He also often ran meetings from his office where he was the Deputy Cultural Attache to the U.S. from New Zealand.

** Mel (Kristen Schaal). Not only was she the band’s most passionate fan, she was the only fan. (Therein lies the joke.) She was a friendly stalker who flirted with Jemaine and Bret, sometimes in front of her clueless and much older husband.

** Dave (Arj Barker) was the best friend of Bret and Jemaine. The pawn shop owner is the village idiot with a lot of preposterous theories and advice. Dave also was responsible for the series’ best joke. If you’ve ever spent time in New York City, you’ll appreciate how funny this exchange is:

Dave: “So, you’re just going to elope? Leave the city? Leave the band?”

Dave: “Wow. New Jersey. I’d love to go there, but I got a lot of shit going on in the states right now.”

FOTC was so good that trying to come up with a list of the best episodes is difficult and often divisive among fans. But the following stand out to me:

Quote: “I have some good news. I’m developing a vaccine for pepileptic dogs.”

Bret and Jemaine compete for the same woman after meeting her in the park. Both are immediately smitten with Barbara – or is it BrahBrah – (Kristen Wiig), who is searching for her lost epileptic dog.

They both try to woo her by writing songs about canine epilepsy and arranging a fundraiser. She sets up a date with Bret first at 7:30 and then Jemaine at 8 – at the same restaurant.

The battle for her affections includes Bret stealing Jemaine‘s glasses and wearing a fake beard. Unknown to both, Barbara/ BrahBrah may or may not actually have a dog. And the benefit concert they organize leads to unintended consequences. Then when they ask her to choose between them, they get a response they didn’t expect.

Some of the best reoccurring jokes involve Mel, the band’s lone and mentally unstable fan. When Murray has a fan competition contest, the winner is, of course, Mel. There were hundreds of entries but all were from her – except for one who was disqualified due to his obvious conflict of interest.

After this failed attempt to increase the fanbase, Murray books the band at a world music show. Surprise! The band picks up two new fans: Summer and Rain, who both happen to be significantly more attractive than Mel. All of a sudden, Mel has competition, which drives her to jealousy.

Quote: “What are you working on? Splitting up another band?

It’s hard under the best of circumstances to keep a band together. When you’re a two-man operation like FOTC, you’re even more vulnerable.

The latest threat is Bret’s new girlfriend Coco – a woman he cares for so much that he wrote a two-hour love song. What makes this episode fun is Jemaine’s ridiculous insistence on accompanying Bret and his lady on their dates. It takes being the third wheel to a ridiculous extreme.

When Bret finally wants some alone time with Coca, Jemaine takes it personally and he and Murray start seeing her as a Yoko Ono – a woman who is going to break up the band.

This episode features two of the series best songs: “If You’re Into It” and “Pencils in the Wind.”

Quote: “It was a rejection call, but then I turned you around, didn’t I? With my managing.”

Murray means well and is devoted to the band, but is absolutely terrible at his job. Would you trust your business to a guy who dries his underwear in the microwave?

After another poor turnout at a gig, he’s down in the dumps. Bret and Jemaine want to boost his spirits. They come up with the ludicrous idea of hiring a “semiprofessional” actor (Will Forte) to pretend to be the head of a record label.

His task is to simply to cheer Murray up. But things go awry when Ben The Actor tells Murray he will sign FOTC to a record contract. That leads to comedy of errors including a dinner to negotiate the terms of the deal. Murray is so happy to accept a $2 million deal that everyone — except for Murray — knows is fake. Forte is great and the Lord of the Rings scene is silly and fun.

Quote: “I accidentally slept with an Australian.”

This blends the best elements of FOTC. There’s cultural humor (the audacity of “interracial” dating: a Kiwi and an Aussie). There’s a great song and music video: Carol Brown. The episode begins with a drunken hook-up, but it’s not until the next morning when Jemaine realizes that she’s Australian. (Sidenote: Why didn’t he recognize the accent from the previous night? Answer: It was loud in the club.).

Anyway, as you may know, New Zealanders and Australians have a bit of a rivalry. The tongue-in-check cultural differences concern Jemaine, but he’s determined. Love will conquer all. Even if Bret and Murray are mortified that it’s with an Australian. The episode is directed by Michel Gondry, the visual wizard behind Eternal Sunshine of the Spotless Mind.

The ending is a joke about what New Zealanders think of Australians.

That’s the list. Disagree? You can watch your favorite episodes on HBO GO.