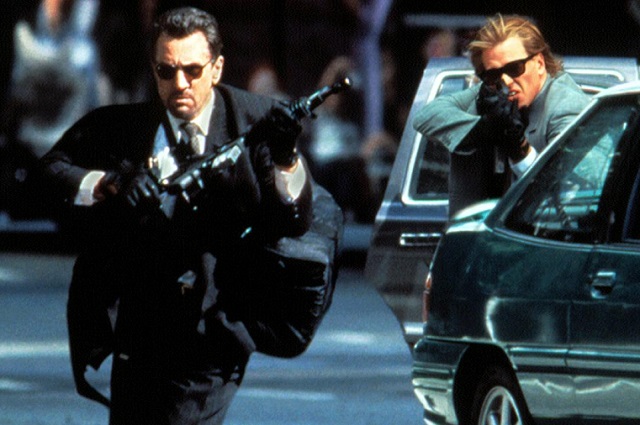 The selling point for Heat was simple, yet significant. Al Pacino and Robert De Niro were in the same movie. Two iconic actors considered among the very best in the profession dating back to the 1970s, yet had never been in a film together.

Nowadays, casting Pacino and De Niro would be notable, but more of a gimmick. As celebrated as the two are, their best work is behind them. De Niro has kind of settled into grandfatherly, more comedic roles. Movies like Analyze This and Meet the Parents have practically defined the later stage of his career. Pacino is practically a caricature whose most interesting recent work has been in HBO biopics (as Jack Kevorkian and Phil Spector).

But in 1995, Pacino and De Niro starring in a project required material that rose to the occasion. A crime epic written by Michael Mann — who mythologized cops and criminals in early work such as Thief, Miami Vice and Manhunter — featuring a detective and thief matching wits and finding kindred spirits certainly seemed worthy of those actors’ talents and reputations. (The deep cast also included Val Kilmer, Tom Sizemore, William Fichtner and Amy Brennaman, along with an adolescent Natalie Portman.)

During the past 20 years, I’m not certain another crime thriller has reached the level established by Heat. Maybe 2008’s The Dark Knight, despite its superhero trappings. Yet a Batman movie doesn’t lend itself to the sort of character study that Mann created. He goes deep with his two leads, exploring their personal lives, motivations and ambitions. Which of the two is the protagonist or antagonist depends on who you find more compelling or sympathetic. That’s the beauty of Mann’s story. He gives equal time to his two main characters, not showing any preference to one over the other. Most movies would glorify the villain or linger on the obsessiveness of the cop trying to catch him.

Pacino’s Vincent Hanna is a relentless robbery-homicide detective whose only real interest is the next criminal he’s chasing. He has no real interest in being at home, other than to feed his basic human needs. Even then, his mind is elsewhere, thinking about crime scenes, victims and how to catch the bad guys. As you’d expect, his marriage (which is his third) is falling apart because of that. His wife, Justine (Diane Venora), chides him for never being present even when he’s physically there.

But as Vincent says later in the film, he can’t leave that stuff at the office and forget about when he gets home. He has to hang on to how those victims and crimes make him feel to maintain his edge as a cop. While that makes Hanna compelling and certainly explains the manic energy of Pacino’s performance, it also gets to the heart of what Mann seemingly wants to portray here. These are not normal people. Normal people couldn’t possibly do this and be any good at their jobs. Any attempt to force them into a routine existence is courting failure. And those who try end up either heartbroken, damaged or maybe even dead.

Obviously, that applies to De Niro’s Neil McCauley as well. You might expect that from him, since he’s a thief and ex-con. Yet throughout the movie, McCauley appears to be the refined one. He dresses well, is immaculately groomed, and enjoys hanging out in bookstores (even if he’s doing research for his next score). He’s quiet, which makes sense, because he doesn’t want to be noticed. And as he makes clear in the line that defines the movie, McCauley doesn’t want to be attached to anything that he can’t leave behind. That would slow him down and get him caught.

“Don’t let yourself get attached to anything you are not willing to walk out on in 30 seconds flat,” McCauley says to two different characters during the film, “if you feel the heat around the corner.”

One of the people McCauley utters this line to is Hanna during arguably Heat‘s most memorable scene, essentially the only one that Pacino and De Niro are in together. This is what people presumably paid their money to see, and thanks to the actors and Mann’s dialogue, the moment does not disappoint.

The premise of the scene is almost absurd. The cop invites the criminal out for a cup of coffee to talk. But Hanna and McCauley have reached a point of deep mutual admiration, each trying to outsmart the other, respectively thwarting elaborate schemes to either pull off a heist or surveillance operation. The two are essentially at a stalemate, viewing each other from afar, which is presumably why Hanna invites McCauley out for coffee. He wants to size this guy up.

In the process, the supposed enemies learn they’re much alike. They don’t want to do anything else; they don’t know how to do anything else. Normal lives aren’t for them. But perhaps there’s one key difference: McCauley is the one with something to lose. He doesn’t want to go back to prison. He’s met a woman he wants to run away with. Hanna’s already made a disaster of his life. Going after McCauley is all he has. And the prey can see up close just how obsessed his adversary is.

Actually, I’m not certain the Pacino-De Niro sitdown is truly Heat‘s best scene. Many would surely point to the 10-minute shootout between McCauley’s gang and the LAPD in the streets of Los Angeles following a bank robbery. The energy of the foot chase and the sheer fury of the gunfire, with hundreds of bullets being fired between cops and robbers, may be the best thing that Mann has ever done on film. The carnage, all that ammunition and the length of the scene pushes toward the edge of ridiculousness. But because you don’t know what’s going to happen, who’s going to get killed and whether or not this is where the thieves are actually caught, the sequence is absolutely riveting.

As with the diner scene, however, Mann dares to risk making his film look foolish. Each scene nearly seems silly at face value. Both are certainly gratuitous, indulging the mythic quality of cops and criminals, the visceral thrill of on-screen violence and the performances of wonderful actors. But that’s a large aspect of what makes Heat so exciting. In the hands of a less talented director and cast, this movie could have been ridiculous and unbelievable. Yet it never steps out of the boundaries of realism. This isn’t a cartoonish action flick. It’s about the most basic of conflicts: Those who try to take versus those who try to protect.

All of this isn’t to say that Heat is a perfect movie. It’s probably at least 30 minutes too long. Scenes dealing with characters’ personal lives linger too much on the soapy drama of those relationships. Mann is also completely infatuated with the procedures of both police work and the intricate planning that goes into these heists. But that’s because he loves these characters and wants to portray how smart they are, how driven they are. Though he oversells the point, it’s worth mentioning that despite all of those indulgent scenes, Heat doesn’t feel like a three-hour movie.

Also, Pacino goes way, way over-the top in his performance. Again, we’re talking about a manic character who’s probably on the edge of insanity, at least in comparison to so-called normal people. And when tensions are high or things aren’t going to Hanna’s liking, that frenzied energy just explodes out of Pacino’s body. He can’t contain it. The rage is simmering just below the surface and when the kettle boils, it doesn’t whistle — it screams.

Almost every time I talk about Heat, I talk about the scene embedded above. Hanna and his team find out that the wife of McCauley’s right-hand man is having an affair. And the police want to use that to set up a trap. But what would compel the poor guy to carry on an affair with a woman he knows is married to a ruthless criminal? Hanna spells it out in the most memorable way possible, screaming that she must have had a “GREAT ASS.”

Pacino nearly loses it, seemingly ready to make himself laugh. He even says, “I’m ferocious, aren’t I?” and I have to wonder if that line was ad-libbed. Somehow, Hank Azaria and Wes Studi keep it together, though you have to wonder if it required multiple takes. I love this scene, but it’s borderline ludicrous with Pacino indulging his worst impulses as an actor. But in that way, Pacino is like his director. He goes right up to the line of foolishness, but doesn’t quite step over it. And because he dares to look silly, you can’t stop watching him.

Heat doesn’t represent the best work of everyone involved, but still holds up 20 years later. Mann went on to make other excellent films, such as The Insider, Collateral and Miami Vice (which I will defend, maybe at this site someday). Pacino has still done good work, including Donnie Brasco, Insomnia and another collaboration with Mann on The Insider. Maybe De Niro is the casualty here, though that’s putting it strongly. But has he played a particularly memorable role that wasn’t a comedic one since this movie? I would argue he hasn’t. Maybe that’s appropriate since his character is the one that ultimately lost the most in this story.