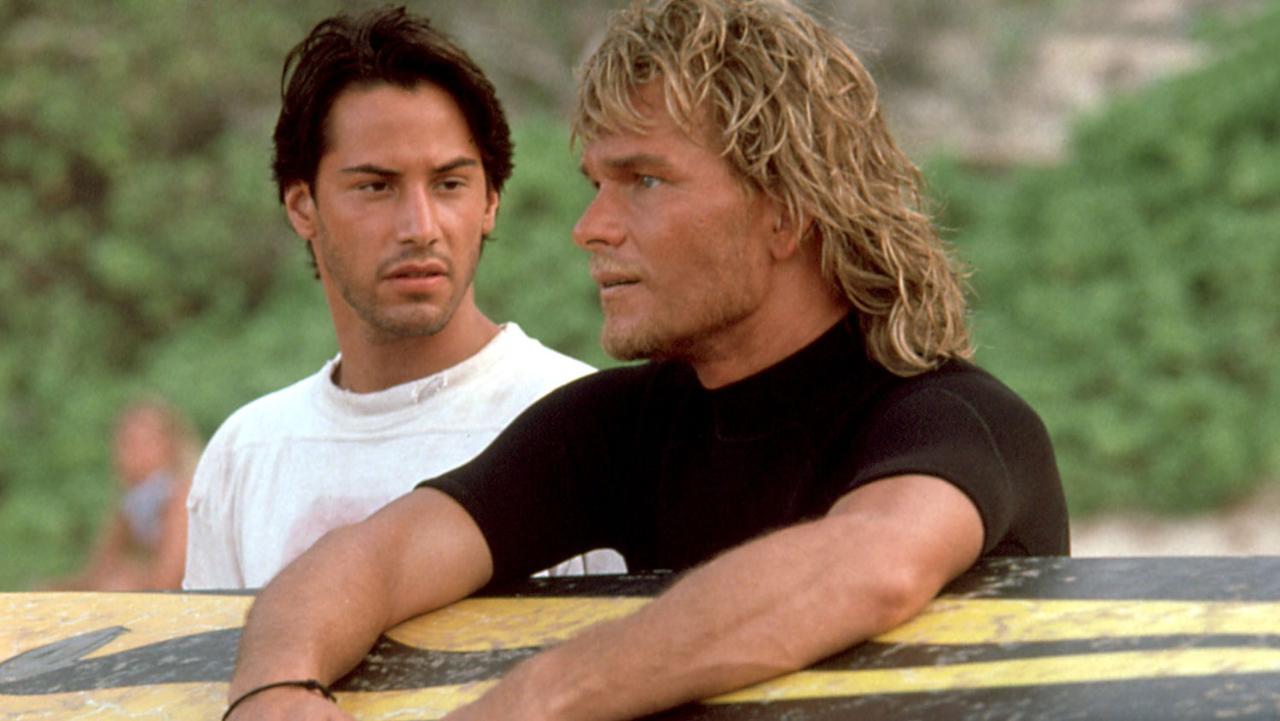 In cinematic history, July 1991 will forever be remembered as the month when Terminator 2: Judgment Day dominated theaters as the number one movie at the box office every weekend. While that film’s place in our pop culture iconography seemed destined to be, it was two films released a week after T2 that made cultural impacts just as strong, if for very different reasons.

On paper, Point Break shouldn’t work. It’s a large part of the reason that the 2015 remake bombed. It’s a ridiculous concept that sounds like a goofy offshoot of the buddy cop movies of the 80s made famous by Lethal Weapon or 48 Hours.

A former quarterback becomes an FBI agent (sure) and goes undercover with his grizzled partner (okay) as a surfer (hmm…) to infiltrate a surfer gang who robs banks (wut). It’s the kind of logline that gets you laughed out of a Hollywood executive’s office. Or so you’d think.

Turns out the original pitch was slightly different. Originally, the story was about a gang of skateboarding bank robbers, which could have led to some seriously hilarious getaway sequences. It was also called Johnny Utah before the script was changed from skateboarders to surfers and after a brief detour when it was known as Riders on the Storm, they eventually settled on Point Break halfway through filming.

Even after they smoothed out all the edges and settled on a bank-robbing surfer gang, this was the kind of movie that would succeed or fail with it’s casting (again, see the remake). Oddly, the film’s producers got it exactly right by getting one of their major casting decisions entirely wrong.

First off, let’s be clear that Point Break lives and dies with Patrick Swayze. As Bodhi, the surfer guru leader of the Ex-Presidents, Swayze does two things that elevate the film from farce to success.

Number one, he’s himself. Patrick Swayze would have made for an amazing Marvel or DC superhero. He was born about twenty years too soon for the current movie-making trend but what he was able to accomplish in his career was the ability to elevate source material simply by being who he was. Does Road House work for even a minute if you don’t buy-in to Swayze’s portrayal of Dalton? And does Point Break have quite the same gravitas without his Bodhi creating an emotional center around which all of the other characters circle?

Number two, he took the entire thing seriously. Swayze is not winking at us from this absurd plot, he makes us believe with every inch of his being that this is possible and makes us wish we were a part of it.

That’s actually what makes Point Break so successful in general. The whole proceedings are treated with a seriousness and weightiness that you wouldn’t expect if all you heard was the film’s logline. Surely this isn’t a movie that should take itself seriously, and yet it does, and that’s why it works.

That’s how Keanu Reeves, somehow, works. We can all admit that Reeves’s acting and line delivery is dubious at times (“I am an EFF BEE EYE agent!”). Yet his boyish naiveté and the way he’s completely overshadowed by Swayze does him a lot of service. He’s a boy in a man’s world on the screen and in real life. We forgive him for his Keanu-ness because the serious manner in which he and the others are treating this surfer gang movie demand it.

It helps that Point Break comes from an era before heavy CGI and before a time when watching someone skydive wasn’t passé. The stars of the film actually do many of their own stunts (that really is Patrick Swayze jumping out of an airplane) and we hadn’t yet been desensitized to the idea of extreme sports in a way that death-defying feats seem normal (yet one more thing the remake didn’t understand).

The film is a great mixture of obvious tropes (The 80s buddy cop movie, the undercover agent who gets in too deep, the love triangle between the good guy and the bad guy) as well as unique touches that only could have happened here (Anthony Kiedis and his hair, everything Keanu Reeves says, Gary Busey before he went full Gary Busey)

There’s a reason Point Break has been commented on and revisited so many times in our pop culture since. Sure there’s the aforementioned remake but go rewatch the original Fast & The Furious movie sometime. It’s basically a shot-for-shot remake but with cars. In Hot Fuzz, they literally watch the chase scene as Danny reveals it’s basically his entire motivation for becoming a police officer.

Whereas Point Break has lived on as a pop culture touchstone, another film that came out that same weekend marked an important point in American cinema history not for catchphrases and action set-pieces, but for what it’s story meant and the fact that it even made it to cinema screens to begin with.

As we prepare for opening weekend of the new Ghostbusters remake with an all-female cast, we’re reminded that Hollywood has had unspoken (and sometimes plainly spoken) rules about movies. You can’t make a movie without white actors and you certainly need white men. That’s how you make money and that’s how you attract audiences. That kind of logic was never going to work for a movie like Boyz n the Hood and even 25 years later it seems surprising that a movie studio signed off on a wide release for the film in 1991.

A movie about life in Los Angeles’s inner city featuring an almost all-black cast led by mostly unknowns (who have since become very known) sounds like the kind of thing that never would have had a chance in the same world of Terminator 2 and Point Break but credit goes to John Singleton for reminding us that this isn’t a “black story” but a human story.

The film came with built-in controversy (violence at early screenings) as well as built-in accolades (critically-praised, shown at the Cannes Film Festival). It’s all at once shocking and yet not shocking that it would go on to be nominated for two Academy Awards (Best Director, Original Screenplay). Singleton was the youngest person ever and the first African-American to be nominated for Best Director.

Most importantly, however, is the way Boyz n the Hood introduced much of white America to the gang violence and day-to-day life in the neighborhoods where they were a constant threat. Try as they might to ignore that reality in the nightly news or even on their radio dial, they couldn’t escape it here.

The movie was a breakout opportunity for star Cuba Gooding Jr. as well as co-stars Ice Cube, Morris Chestnut, Nia Long, and Angela Bassett. Even Laurence Fishburne, who had been acting in films for years, saw his career take off after the success of this one. So many African-American actor careers kickstarted by one film. It makes you wonder what would have happened if the film hadn’t have been made.

The ending is more bitter than sweet. Though Tre and Brandi are able to make it to college, neither of his friends make it out alive. Almost as if that was the cost the neighborhood demanded. 25 years later, recent events recall that message that as African-Americans make gains in America, they are still paying an unfair price. Boyz n the Hood felt ahead of it’s time in 1991. In 2016, it feels downright prescient.