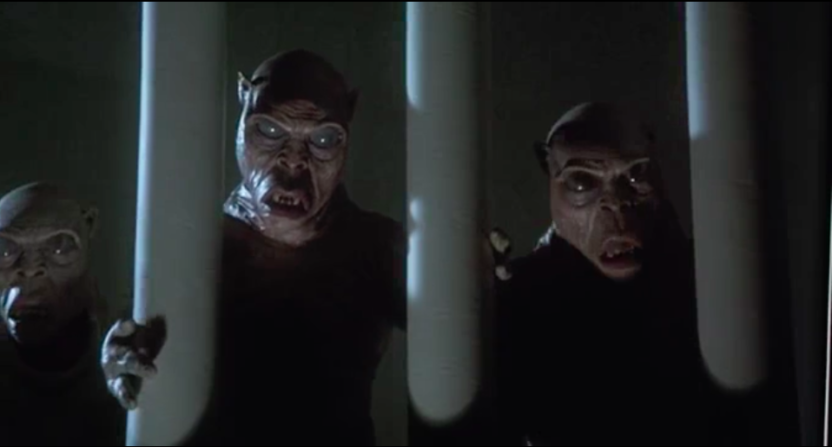 The Gate, which was released 30 years ago on May 15, is not a particularly good movie. It’s the kind of movie that would be right at home getting roasted by the How Did This Get Made? folks. And time has not been kind to its special effects or brand of humor.

Yet there are reasons that this PG-13 horrorfest has earned a cult following over the years. It was, for a long time, the kind of movie you might find on HBO at any given moment in the early 90s, back before HBO became HBO, giving young audiences a chance to mainline it into their system. America’s love affair with Stephen Dorff began here, before he went on to star in a Uwe Boll film and make vaping commercials. And it does take the popular 80s comedy trope of kids being left home alone by their parents and twists it to a degree of morbid success.

More than anything, watching The Gate in 2017 will remind you just how far we’ve come as a society. For real. Stay with me.

With an over-eager urgency to get to the good stuff, the film opens to Glen (Dorff) waking from a nightmare involving the creepy tree in his backyard falling down to find that the creepy tree in his backyard has fallen down. Not only that, a construction crew is in his yard removing the stump with heavy machinery, leaving behind a menacing hole in the ground (and setting off the mist machine apparently buried therein). What’s really strange about the scene is that Glen’s parents don’t appear to be home when this is happening. A crew of men are doing serious work in the backyard and apparently they left it to their teenage daughter (Christa Denton) and adolescent son to deal with. To be fair, that’s a theme that will carry us through the film.

Later on, when Glen’s Dad does get home, he scolds Glen for the hole (?) and tells him it’s his responsibility to fill (??) before he and his wife leave the kids to fend for themselves for three days. Classic 80s movie parents move.

Of course, that’s also when things start to go south in a hurry. Glen and his best friend, death metal enthusiast Terry (Louis Tripp), who just so happens to listen to a Swedish metal band that has based their entire album around “The Dark Book,” which foretells of demons who want to take over the Earth. Guess where those demons are hanging out? All that stands between us and eternal darkness are a couple of suburban kids, one of whom really has a thing for launching toy rockets.

As you’d probably expect, given that it was made in 1987, there are aspects of The Gate which hold up and there are aspects that do not hold up in the slightest. What grounds the film throughout the first two acts is the through-line of absentee parenting that affects both Glen and Terry. For Glen, it’s immediate, as his parents have literally left him to save the world by himself and so from the confines of his home. For Terry, we’re told that his mother has died and his father doesn’t have the time for him, hence the dabble into the world of the occult.

Credit where credit is due, Tripp is most effective when working out the frustrations over his situation. So much so, you kinda wish the film was actually from his perspective. We want to know what it’s like at home with his father. We want to get inside his head a bit more. Glen is our hero, but Terry is the one we’re rooting for.

Also effective are some of the scares, which remain genuinely disturbing. In keeping with the theme, it’s usually the ones that revolve around issues of familial breakdown. The scene where Glen approaches what he thinks is his father and gives him a hug before realizing it’s, in fact, a demon is perhaps the most upsetting of the film. Glen gouges for his “father’s” face and watching his face melt and crumble before our eyes is disturbing, especially given the psychological effect that must have had (perhaps delved into in a better film). A small moment where we’re shown a family photo wherein everyone except Glen is bloodied and murdered is also effective is eliciting an upsetting response.

But a film about a demonic takeover of our world is going to pin its hopes on those demons and perhaps that’s where The Gate is going to lose a modern audience. Or at least, the dated CGI will make you chuckle long before it ever scares you. The tiny demons who first appear and run amok around the house seemingly foretell the Minions, even if that wasn’t their intention. As for the Big Bad, the lead demon who appears at the end of the film comes with gimpy Tyrannosaurus arms and buckteeth that elicit the memory of the goofy gremlin in Gremlins 2. 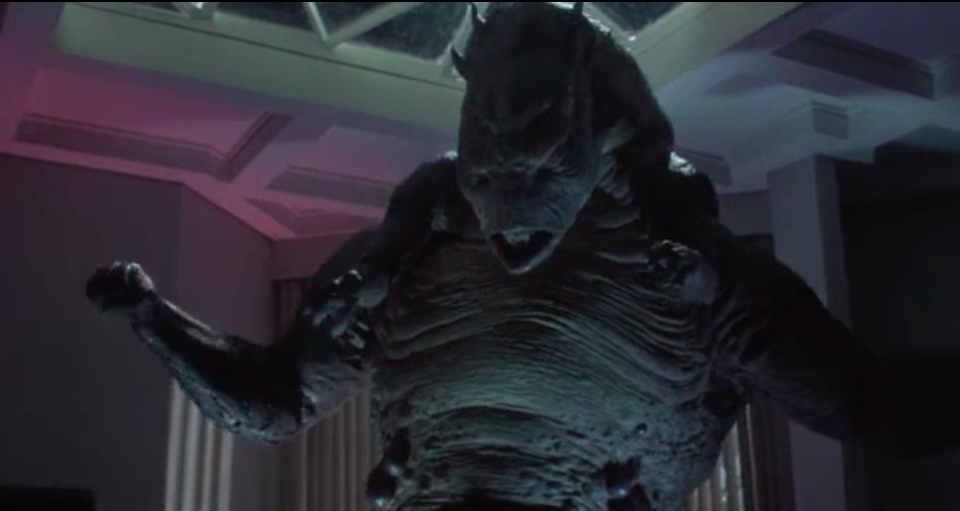 Still, for all its faults, you probably know what you’re looking for when you sit down to watch The Gate and those expectations are likely to be matched. You’re not here for award-winning dialogue and plot points that add up. You’re here for an 80s horror romp.

One thing you also get as a member of the 2017 viewing audience is a peak into the world of 1987 when certain phrases and putdowns were, if not considered 100 percent above board, certainly not scoffed at. And what makes it all the more jarring is the way these verbal jabs come on the heels of some childish jargon that seems dumbed down to the point of confusion. Like an adult wrote insults that children would lob at one another and then ran it through four different language translators. For example… 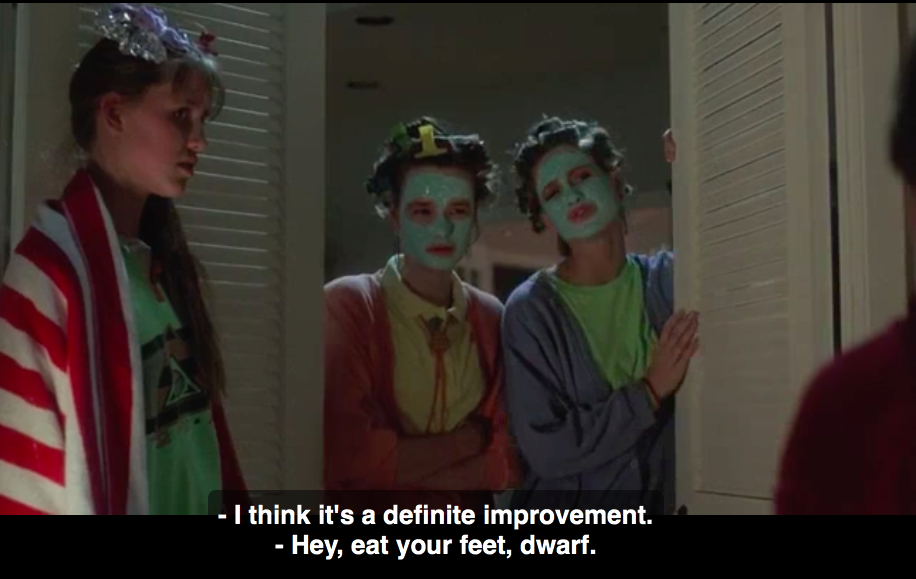 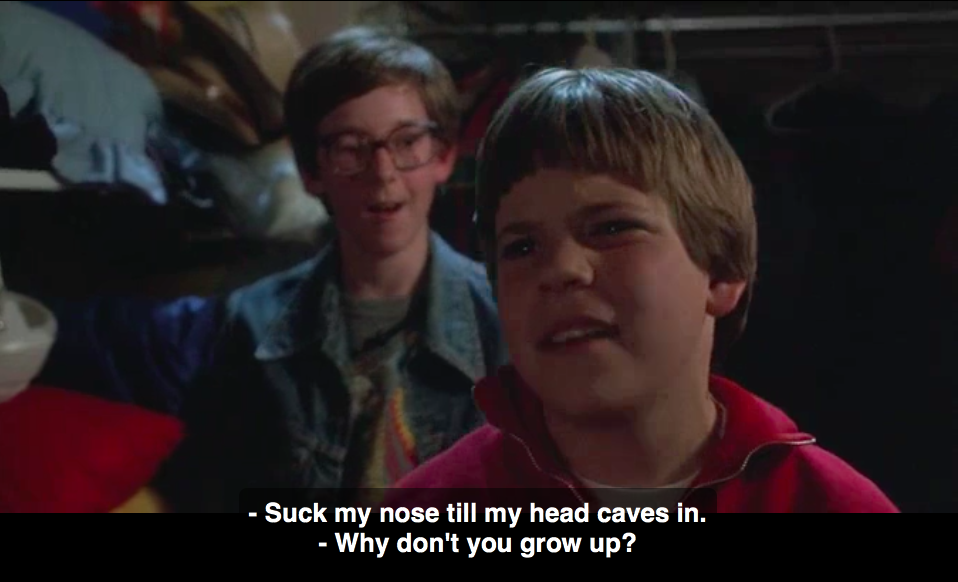 Let’s begin with “eat your feet.” Apparently that is a known quantity, at least in the world of the urban dictionary. Defined as “a phrase to say when upset by a friend’s snotty-ness.” We’ll allow it, even if there were 10,000 other possibilities you could have gone with before that.

But then that brings us to “suck my nose till my head caves in.” Okay, what? WHAT? A quick internet search confirms this putdown lives only within the confines of The Gate. But that’s not the puzzling aspect. The puzzling aspect is to ask yourself why this is a putdown at all. It seems to imply that sucking one’s nose is a thing that is done. If so, the results of which must be pleasant, which we can ascertain by the fact that one can suck a nose incorrectly, thereby caving in the nose-haver’s cranium. But if so, why would you, whose nose has been sucked so hard that your head has ceased to be spherical, be the winner in that situation? Certainly the nose-sucker would be the winner of this presumed scenario, no?

There’s a few quips like this strewn throughout The Gate, usually involving Glen and The Lee Sisters, his sisters’ best friends, and Eric, his sister’s potential paramour They tend to hit him with baby-related putdowns while Glen responds with…whatever the hell it is he’s saying up there. There is another aspect to their fraught relationship, however. One steeped in a bygone era’s mainstream acceptance of a certain type of insult. To show you, here’s the line that came right before the tete-a-tete we just studied in response to the question, “What are you two doing in there?” 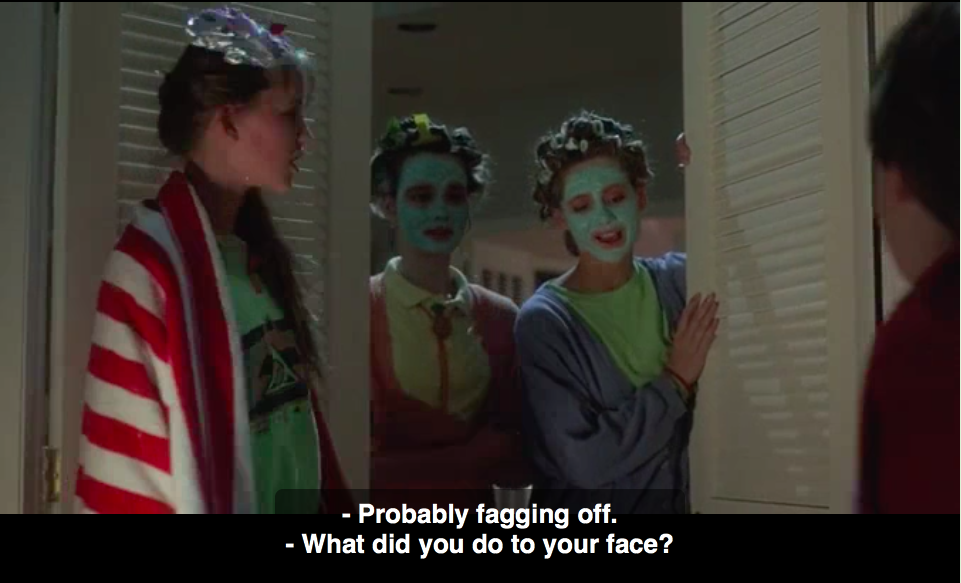 But considering they’re meant to be cruel jerks in this scenario, perhaps we can at least understand why their language would be laced with such hateful rhetoric. It’s not like the hero of our film, an innocent child whom we’re all supposed to be rooting for, would talk like that. 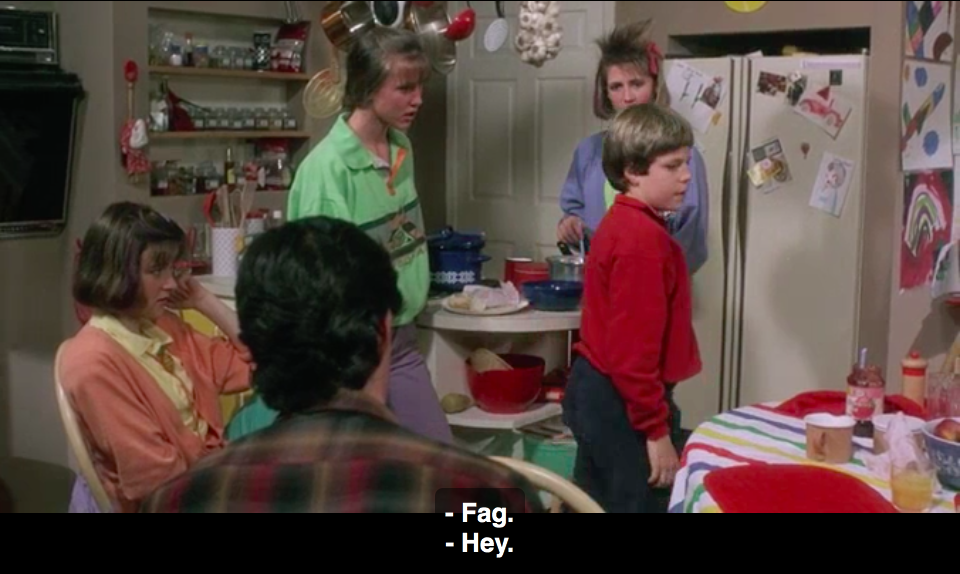 I’m beginning to wonder if the demons who are rising from the depths to reveal their true natures to the world are more of a metaphor than first thought.

Also, like I said, Terry is the one we’re really rooting for. 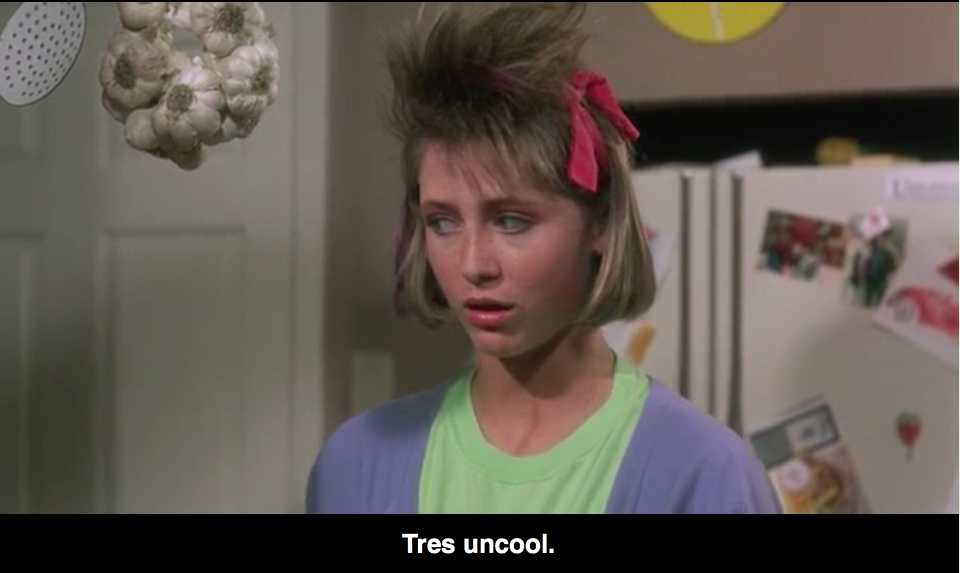 A self-contained story, The Gate certainly set itself up to be the first in a franchise of easily repeatable stories. Get some people together, open up a whole to the underworld, bring out some demons, boom. In fact, believe it or not the film made money on it’s release as well ($13.5 million domestic box office on a $6 million budget). There was a sequel, which brought back Tripp as Terry (now Terrence) but it was, um, not good.  The original was almost remade during the horror remake glut of the mid-2000s/early 2010s but the project seemingly fell apart.

So in the end, children of the 80s and horror aficionados are left with this film. Not a classic, per se, but a great horror movie to watch with a couple friends and a couple beers. There’s a more nuanced, darker version of this film that you can see the seeds of. (In fact, the screenwriter has said his original version was much “nastier.”) The contemplations that it begins about what it’s like to be a child in search of parental guidance could have led the movie down an interesting road had it pursued the string. Instead, it ultimately scraps those seeds in favor of creeps and gore in a way that is more likely to make you chuckle than run and hide.

Do what you will with the unfortunate f-word placement (amongst other outdated putdowns) but if you can set that aside as an unfortunate byproduct of a (mostly) bygone era, you can have some fun watching The Gate. And if you don’t want to watch it, suck on my nose until my head caves in.