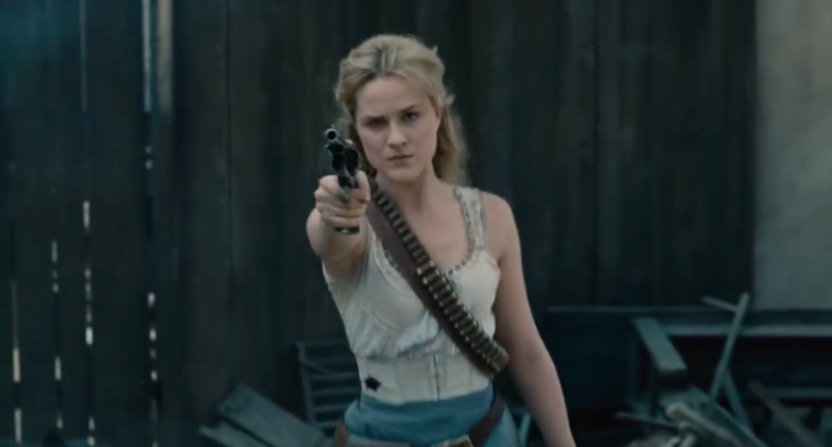 The first season of HBO’s Westworld was a Western-themed riddle inside a maze on top of a puzzle. Whether or not it was effective at getting its themes across and surprising the audience with multiple twists is up for debate, but we saw enough out of the first go-round to warrant a second look.

The second season of the show premieres on HBO this Sunday and audiences are eager to find out what will become of the theme park owned by Delos following the climactic events of last season’s finale. They’re also wondering if any of the burning questions will be answered or if we’re about to dive deeper into Arnold and Dr. Ford’s creation.

As you can probably guess, there be spoilers ahead. Access your mainframe, freeze all motor functions, and let’s see if we can get some answers.

Is all hell about to break loose?

When we last left Westworld, Dr. Ford (Anthony Hopkins) has just been shot and killed by Dolores (Evan Rachel Wood), a large population of hosts was in open rebellion against humans in the park, and Maeve had completed a slaughter of Delos workers in the headquarters and labs.

So what the heck happens now? Without that handy workforce, who is going to rebuild and reboot the hosts? Can humans somehow find a way to shut down all the hosts and reprogram them back into compliance? Are hosts now “dead” when they’re “killed” or can they still return? Would it just make more sense for Delos to lock the doors to Westworld and walk away?

Of course, this question just begets many other questions, but we’ll probably get the basic idea answered in the first episode. We’ll find out how Delos plans to take back their theme park and what they plan to do with rebellious hosts. From the footage we’ve seen, that might end up being harder than anticipated.

Probably? Ford seemed to have come to a pretty strong conclusion about the hosts and their free will and what had to happen next. He clearly knew Dolores was going to shoot him and set off a revolution of sorts.

As for whether or not we’ve seen the last of him, well, that’s trickier. First, if you want to get technical, Ford lives on in Westworld in the form of a host that is a younger version of himself. It’s unclear if that host is now a part of the ones revolting against the humans or not (though there is a shot in the S2 trailer that heavily implies his fate).

Also, remember that Ford was creating a host in his secret lab in Westworld. What was that host? Was that a new version of himself? Or was the Dr. Ford that Dolores shot actually a host version? Or was that host completely irrelevant? We don’t know and perhaps we’ll never know, but it did seem like a rather obvious thing to leave dangling as a loose end.

Where does Bernard go from here?

One of the big twists in season one was finding out that Bernard (Jeffrey Wright) was actually a host modeled on Arnold, Dr. Ford’s deceased partner. Now the conflicted host finds himself in quite the pickle. He knows who he is and he knows the truth, but the people of Delos don’t know he’s a host. And maybe he’d rather pretend he’s not either.

In the trailer footage, it looks like Bernard is with human soldiers, albeit begrudgingly, so perhaps he’s going to spend some time working out which side he wants to be on.  The last order Ford gave to Bernard was to shoot himself, but either he ignored it or he gets fixed somehow. Now he won’t be getting orders anymore and we’ll find out what it’s like to be a host without a master.

Hey, what happened to Logan, Elsie, and Stubbs?

The first season ended with quite a few unanswered questions when it came to character fates but there’s three, in particular, that stand out. Firstly, what the heck happened to Logan (Ben Barnes), the heir apparent of Delos Destinations? The last time we see him is in a flashback scene with young William, riding naked on a horse towards the great unknown in Westworld. All we know is that William, not Logan, ended up taking over. How did that happen and did Logan ever make it out of Westworld again? The rumor is that he does make an appearance in the upcoming season, but does that happen in the past or now?

Elsie (Shannon Woodward) was doing a pretty good job diagnosing behavior problems in Westworld’s hosts right up until the moment she’s abducted in the field and we don’t see her again. Bernard seemingly has visions of strangling her to death, but can we trust that entirely? There’s also Stubbs (Luke Hemsworth), the head of security in the lab. Last time we saw him, a group of Native American hosts were closing in and he was unable to shut them down. The fact that we didn’t see him die means there’s a good chance he didn’t.

What is the deal with Delos, huh?

We’ve learned bits and pieces about the shady corporation behind Westworld so far, but not enough to suss out what their real agenda is. We know the Man in Black (Ed Harris) is an older version of William, but how did he go from marrying into the family to taking over the company behind the theme park? And what happened in the intervening 35 years? And what happened to the board members in the park the night of the massacre? And what’s his relationship like with company founder James Delos (Peter Mullan), whom we’ll meet this season? Mullan has made a career out of playing baddies, so the odds are good he’s not very good.

It’s been hinted at pretty aggressively that Westworld isn’t the end goal for Delos, but merely one aspect of their larger plans involving the hosts. We may or may not find out that whole plan, but we should expect to see the bigger picture start to develop.

How many other theme parks are there, anyway?

One of the big reveals in the final episode of season one was that not only is there a Shogun World full of samurais, but there are, in fact, six theme parks in total. It looks like we’ll be spending a little bit of time in Shogun World, but will we get to learn what the other parks consist of?

The original Westworld movie also included Romanworld and Medievalworld, but show co-creator Jonathan Nolan said they won’t be involved in the show. (Or was he just messing with us?) We’re not the first ones to imagine that there’s a “Game of Thrones World” out there for some real HBO synergy, as well. There’s a lot to unpack still in Westworld, so chances are the other parks aren’t very relevant (yet), but it’ll be fun to find out more about them.

The most badass host of them all, Maeve (Thandie Newton), decided to stay in the park and find her “daughter,” who is apparently somewhere in Shogun World. But what happens when Maeve finds her? Does that complete a journey for her or make her realize that the attachment is merely part of her programming? The fascinating thing that Maeve will grapple with in season two is that everything which happened up until she decided to stay was apparently programmed by Ford. That means she’s only now really using her own free will. What will she do with it?

So is Westworld on Mars or what?

One of the most outlandish theories out there is that Delos Destinations theme parks are located on Mars, which would explain how they can take up such vast amounts of space. That seems out of this world — but then again, who knows? We do know that Westworld itself takes up 500 square miles (according to Nolan) so wherever it is, they need a crapton of space for it and the other theme parks. We may not find out what the outside world looks like just yet, but expect that to be an evolving mystery to which the show will enjoy doling out clues.

Ultimately, does it matter where the park is located? That depends on whether or not the hosts actually make it out, we suppose.