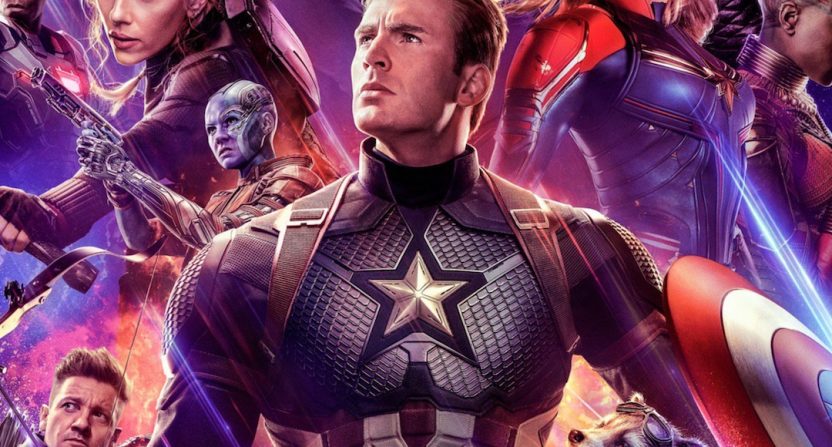 Spoilers follow. Seriously. The entire thing. If you haven’t yet seen Avengers: Endgame and are concerned about being spoiled, do not read any further. At all.

We feel we must stress this one more time: if you are in any way concerned about spoilers, please, please stop reading. We know it’s tough to get to the theater on opening night, so take your time and come back here once you’ve seen it. Please.

From an epic battle for the survival of Earth to a Baby Hitler conundrum, the newest Avengers movie delivers for hardcore and casual fans alike.

Critics of Marvel movies often assert there are no stakes. No matter how grim things may look, the heroes will always find a way to win by the time the credits roll. Throw in some comic relief, add in a few CGI battle scenes, rinse, and repeat to the tune of positive reviews and hundreds of millions of dollars at the box office.

The criticism is valid, at least in the minds of moviegoers who cite The English Patient as their favorite “film.” For devout fans of comics or the casual moviegoer, the Marvel Cinematic Universe offers exploration of a bevy of themes despite the outcome being foretold.

Avengers: Infinity War, with a snap of the Mad Titan’s fingers, delivered a gut-punch ending like no other Marvel film had. But in the real world, we knew it wasn’t like Marvel would ever discontinue blockbuster franchises like Spiderman, Dr. Strange or Black Panther for the sake of storyline continuity.

Endgame begins with Hawkeye training a young Kate Bishop. We see he couldn’t possibly have been troubled with fighting Thanos in the previous installment because he’s still on house arrest for his role in destroying an airport in Germany. His family promptly turns to ash either because Thanos snapped his fingers or his child thinking mayonnaise belonged on a hotdog. Regardless, the hunt for the Mad Titan is on.

Captain Marvel rescues Iron Man and Nebula from certain death as their spaceship floats aimlessly through an unidentified galaxy. They quickly join the leftover Avengers and find Thanos living like the Unabomber on a distant planet. After Captain Marvel subdues him, Thanos confesses he used the Infinity Stones to destroy the Infinity Stones, and what has been done is set in stone. Enraged, Thor did what he should have done in the previous installment: He aims for the head and decapitates the Mad Titan in the middle of his hovel.

Alas, the runtime is a tight three hours and not fifteen minutes, so you know something is afoot. It turns out murdering Thanos can’t bring half the world back, which means the Avengers must deal with the aftermath in typical superhero fashion.

Captain Marvel gets a Hillary Clinton haircut. Thor turns into a fat drunkard gamer king of a fishing village who spends his days threatening teenagers online. Captain America attends an emotional support group while refusing to deal with his own grief. Hawkeye studies abroad in Tokyo and assassinates a Yakuza crime boss.

The ball gets rolling when Ant-Man escapes the Quantum Realm with the help of a rat scurrying over a control board. Despite his powers, Scott Lang needs the help of a security guard, played by Ken Jeong, to escape the storage locker in which his van is parked. He formulates a plan to undo The Desolation by going back in time to retrieve the Infinity Stones before Thanos finds them.

After Tony Stark waffles — he’s enjoying his life as retired family man — a picture of him and Spider-Man spurs him into agreeing to the plot after finding time travel to be possible. Iron Man and Captain America then promptly wrest control of the group back from Black Widow without any dialogue, and the group, after deciding against the infanticide of Baby Thanos, travels back in time to do undo his reckoning.

Black Widow and Hawkeye travel to the planet Vormir, which anyone who saw Infinity War will instantly recognize as the altar where Thanos sacrificed his daughter Gamora to win the Space Stone. The floating red man delivers the same test to Widow and Hawkeye, and the two fight over the right to kill themselves for the good of the universe.

Marvel has rightfully been criticized for its unwillingness to fully develop women characters, and it’s easy to see why when the Widow sacrifices herself for a blood-drenched assassin with a family in typical Women in Refrigerators fashion. (But hey, Widow wasn’t the one with an impending series on Disney+.)

The Hulk successfully uses the Stones to bring back half the world’s population, only for a past version of Nebula (whom Thanos sent into the future after her split conscience reveals the plot against him, brings the Mad Titan into the present. The stage is set for the battle to decide the fate of the universe.

Iron Man, Thor, and Captain America (who is able to wield Thor’s hammer, Mjolnir, as foreshadowed in Avengers: Age of Ultron) are unable to subdue Thanos, who says he will enjoy stripping the universe to its studs and brings forth his army of dark minions.

Right on schedule, Dr. Strange reappears with everyone from Black Panther and the Wakanda Army to Wong, who peaced out to guard the New York Sanctum as soon as Thanos arrived in Infinity War. The ensuing battle is as entertaining as much as it is proof what a few million dollars in the CGI budget can buy.

If you’ve made it this far, you know by now the good guys win. But Endgame finally delivers the stakes when Iron Man swipes the Infinity Stones off Thanos’ gauntlet and snaps, turning Thanos and his army to a pile of ash.

The explosion of energy kills him, and there is no comic book resurrection this time. It’s a satisfying redemption arc for a character that kicked off this saga a decade ago as a self-absorbed billionaire who develops weapons of mass destruction.

And though fans knew this would be the last time we saw Chris Evans in the role of Captain America, Endgame delivers another unexpected gut-punch when Rogers re-appears as a withered old man after refusing to return to the present in his current form when he travels back in time to return the Stones to their original resting places.

That the movie ended with Rodgers, back in the 1950s, slow-dancing with the wife he thought he would never get to hold again, was as fitting an end as Iron Man’s. There could have been no better closure for the once bitter rivals.

Though no end-of-credits stinger hinted at what’s next for the MCU, we did get two nods to the future in Sam Wilson, aka The Falcon, taking the battle-tested shield from Rogers to become the first Black Captain America, and Thor turning over the keys of Asgard to Valkyrie, which will offer another chance to Marvel to right its gender imbalance.

D.J. Byrnes is a college football blogger hailing from Marion, Ohio. He normally sells words to ElevenWarriors.com in exchange for currency.

5 thoughts on “A spoiler-filled recap of Avengers: Endgame, which delivered the promised stakes of the MCU”